Toy Review: GameStop Masters of the Universe Box from Funko Boxes by Funko 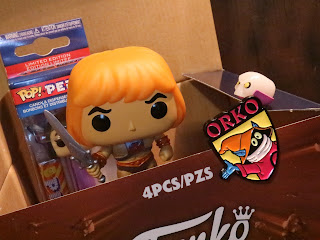 I don't think GameStop's recent surge in stock pricing has anything to do with getting back at short sellers or a group of Reddit users or even their new management hires. If you ask me, it's because GameStop has been carrying lots of Masters of the Universe product! 😉
Last year when Funko really seemed to show interest in ramping up their efforts with the MOTU license GameStop listed a Masters of the Universe box for pre-order. I'd had mine on pre-order for the better part of a year it seemed but a couple of weeks ago I got a call from my local GameStop that my box was in. This one wasn't a mystery box as Funko and GameStop were pretty transparent about what was in it but, if you saw this in the store, you wouldn't know what you were getting. I'm not often a fan of mystery boxes like this and while I did like the Smuggler's Bounty boxes when they were  subscription service I don't pick up many. Considering that Masters of the Universe is my main collecting focus, however, and I love almost anything MOTU, this was a safe bet. The box has four items in it and as far as I'm aware they're all exclusive to this set. Featuring four of the most popular MOTU characters, He-Man, Orko, Evil-Lyn, and Scareglow, there's defnitely a lot of appeal here. Let's take a look at the GameStop Masters of the Universe Box after the break... 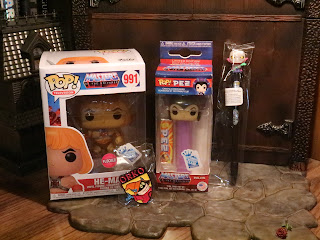 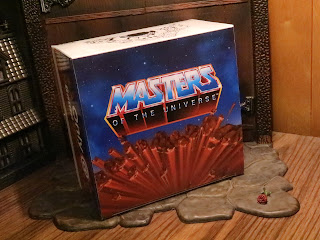 Packaging:
* The set of goodies comes in a pretty standard thin cardboard box with the MOTU logo on the front. There's also a panel with a black and white image of Castle Grayskull too. It's not the most exciting packaging but hopefully it gives you an idea of what you're looking for if you're hunting this down. 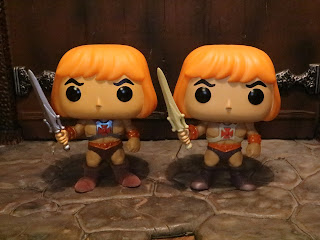 Comparison:
* The He-Man POP! in this set (on the left) is He-Man #991 (Flocked) which was released last year as a standard POP! He was also released in the Walmart exclusive POP! Tees set as a glow-in-the-dark figure (on the right). With the flocked details, this is probably the best version of this He-Man sculpt out there though you may already have one or two versions of the sculpt already. The flocked boots and trunks are the biggest difference. 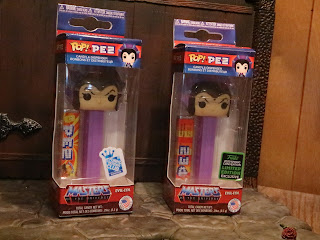 Comparison:
* The Evil-Lyn Pez dispenser in this set (on the left) has metallic blue details on her headpiece compared to the pastel blue details of the 2020 Emerald City and GameStop shared exclusive  Evil-Lyn (on the right). Surely they could have went with a more drastic variant like a vintage toy styled Evil-Lyn, right? 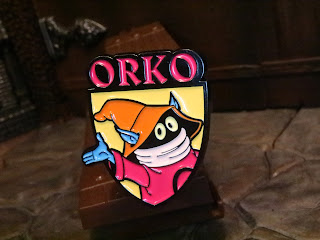 The Positives:
* I think this Orko enamel pin turned out to be really cool. I don't have a huge collection of enamel pins or anything but this is a really colorful and fun piece. I have a shelf in my MOTU collection with some random Orko items and I think I'm going to display it there. This is a really sharp looking piece. 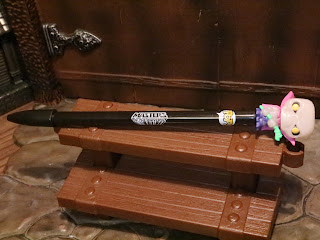 * Next up let's take a look at the Scareglow pen. Typically anything based on Scareglow is a hot item although I'm not sure if that extends to stationary. I've seen a few of these pens sell for around $10-$12 dollars, so maybe. Anyways, it's just a back plastic ball point pen with a pen cap on the bottom and the Masters of the Universe logo in white on the body. 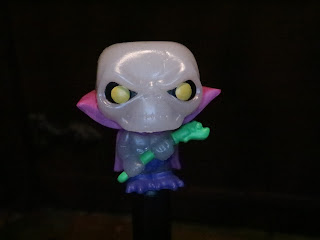 * The little Scareglow on top is the selling point here and he's as close as some of us may get to owning a Scareglow POP! since the one released a few years back is crazy expensive now. He's quite cool and he does glow in the dark, so I think he's a hit. So far as I can tell he's not easily removable or anything so you'll have to find a way to display the pen. 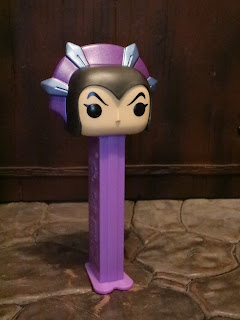 * The Evil-Lyn really is the most boring item in here simply because she's so similar to what we already have. She's not bad (and she comes with a roll of assorted Pez!) but she's way too similar to last year's Evil-Lyn Pez dispenser. 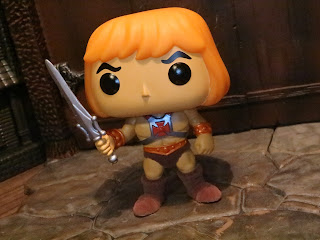 * This is the third version of this He-Man sculpt from what I can recall and it's definitely the best. Yeah, it's the same as last year's standard He-Man #991 but the flocking is a big deal. 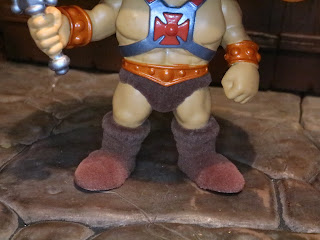 * The flocked boots and trunks are really funny. Silly, yeah, but still unique and kind of fitting with Masters of the Universe. those furry trunks are a part of the good, the bad, and the silly of MOTU and it's kind of neat to see them embraced. I wouldn't want to see multiple figures with flocked trunks as it's really kind of a gag but having a He-Man figure with them? That's just pretty cool. 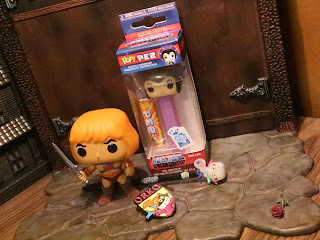 The GameStop exclusive MOTU box costs $25 dollars. If you divide that up by how much items cost (lets say $11 for the POP! and $8 for the Pez dispenser) then you're paying about $7 for the pin and the pen. Honestly, the price isn't any more than your average Funko items and you may even be getting a bit of a deal so long as you like the items. A combo like this is always a bit of a risk as not every fan collects all these types of items and there are probably few MOTU fans who collect whatever they can get their hands on. that being said, I think it's a Great box with some cool items in it. The He-Man POP! is excellent, one of the best, and the little extras are cool, too.

He-Man/ Prince Adam is one of my favorite characters and I've reviewed so many He-Man toys that he has his own review archive! Check out Fabulous Secret Powers for more He-Man toys than you can fit in your toy box!