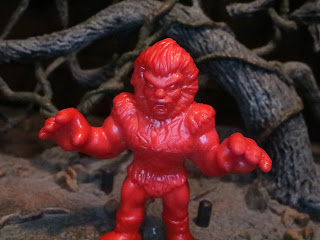 For today's installment of Ferociously Furry February, a month long tribute to Grizzlor, I'm checking out one of the Keshi Surprise! minifigures from Super7. Super7 had the actual M.U.S.C.L.E. license for a couple years but at some point it seems they either lost it or just stopped using it and so they began to sell the figures in little blind boxes under the Keshi Surprise! brand. I wasn't very happy with this decision back in the day as it's pretty frustrating to go from buying full sets of figures in specific packs to having to deal with online blind boxes at a higher price point. I've picked up a figure or two here and there, though, always on the aftermarket, and today I'm looking at the red Grizzlor figure from the She-Ra: Princess of Power series. I reviewed all of the sculpts from this series when I reviewed the PowerCon 2019 exclusive trash can set but this little guy is from one of the blind boxed Keshi Surprise! releases. Let's check out Grizzlor after the break... 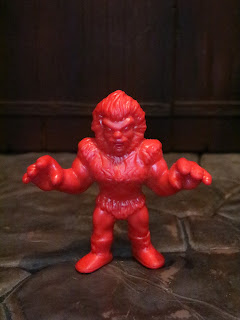 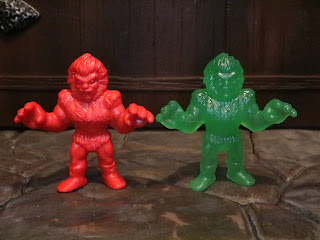 Comparison:
* The various colors of Keshi Surprise! Grizzlors came first but the mold was reused later, in 2019, for the Trash Can Wave 4 (Slime) set Grizzlor (on the right). The details are a bit easier to make out on the solid colored Grizzlor. 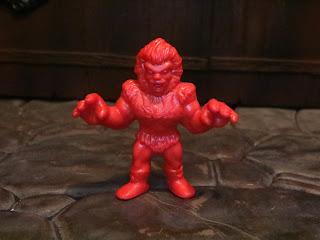 * He's tiny, he's M.U.S.C.L.E. styled, he's grizzly: he's Grizzlor! He's a small figure but there's a nice amount of detail here. This guy is clearly based off of the Filmation Grizzlor and Super7 did a nice job. All of his fur, his harness, and his claws are all visible here, too! He's quite nice. 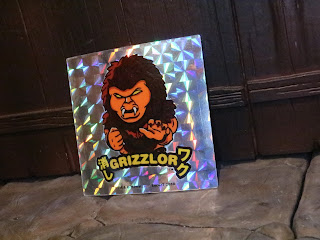 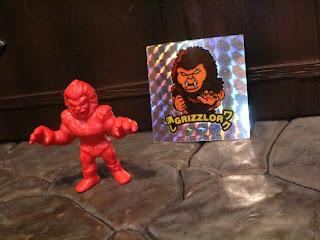 I never liked Super7's transition from selling the M.U.S.C.L.E./ keshi figures in cool little 3-packs to blind boxed single packs for almost the same price but the figures were mostly still pretty good from what I've seen. Grizzlor is a cool little minifigure and I'm giving him a Good and a 1/2. I tracked some of these Grizzlors down because I love the guy and wanted to add a little more variety into Ferociously Furry February. Stay tuned as there will be more of Grizzlor to come!