Action Figure Review: Skeletor on Panthor #98 from POP! Rides: Masters of the Universe by Mattel 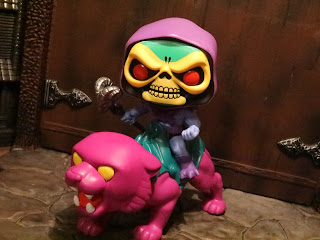 Remember a few weeks ago when I reviewed the flocked version of Funko's POP! Rides Skeletor on Panthor #98? Well today I'm going to take a quick look at the standard version. Yeah, this is the exact same figure as the last release, just without the flocking on Panthor. I'm really just showing off some pictures here. I wanted both figures but I don't think the standard version really warrants a full review, do you? For all the details check out the flocked version but for pictures of the painted Panthor check things out after the break... 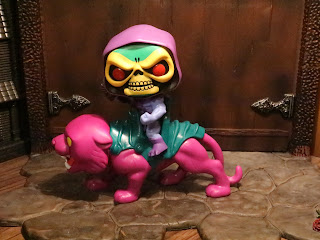 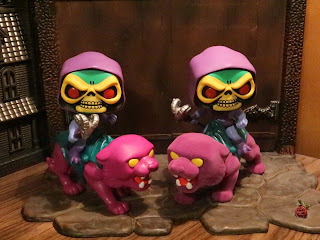 The Positives:
* This guy has all of the same positives as the flocked Funko Shop exclusive minus being flocked. He's a brighter purple too, which some folks may find more appealing. The Skeletor head is still pretty awesome and looks amazing with the black highlights of the various details on his skull. Seriously, he looks really sharp. 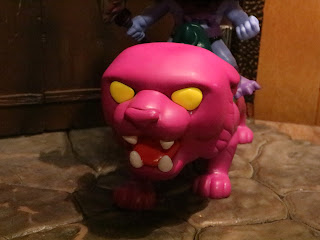 * The unflocked Panthor has the same negative as the flocked Panthor: His nose is not painted black or even made darker. That seems kind of weird, right? I would think that Panthor's should get a paint hit. 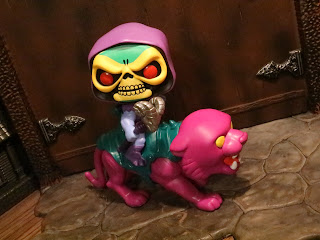 Honestly, whichever version of Skeletor on Panthor you end up with you should be happy. This one is Great as well. Know, Panthor isn't flocked but he's also a few bucks cheaper and you can still find him at retail or cheaper (though the flocked one isn't crazy expensive yet, either). The color of Panthor might help decide which one you like better, too. I like the look of the flocked Panthor but the brighter purple is pretty attractive on the POP! vinyl. Skeletor looks awesome on both and just kind of steals the thunder here, though that's sort of what Skeletor does. He's a thunder stealer for sure.

I've reviewed so many toys of Skeletor/ Keldor that he has his own review archive. Check out Snake Mountain for all of my reviews of Skeletor!
For more POP! Rides reviews check out the following:
He-Man on Battle Cat #84Skeletor on Panthor #98