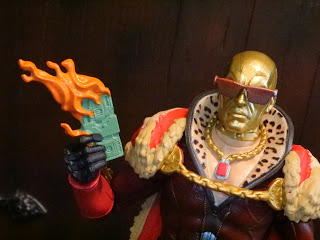 2020 is in the rearview mirror now and today I start my look back at the best parts of what has been universally been regarded as a "dog turd placed in a brown paper bag and lit on fire on your front porch with caltrops hidden inside so that when you step on it your feet bleed" of a year. In some respects, however, particularly when it came to action figures, 2020 wasn't too bad. In fact, it was pretty good, really. Creating my "Top 10" lists is always one of my favorite things to do at Action Figure Barbecue and I always spend a great deal of time going over my notes from the previous year of what toylines were the coolest and most fun to collect. This is now the ninth year in a row I've created a list (the earliest ones were posted at The Epic Review) and it's always interesting too see how my lists fluctuate from year to year, reflecting my changing interests. This year the list wasn't as hard to narrow down to ten candidates as in past years but it still did take a little thought. I've made some changes to my collecting habits over the past couple of years with most of my collecting focusing on Masters of the Universe and Star Wars: The Black Series but there are some other fun lines like the Fortnite: Legendary Series and the G.I. Joe Classified Series that also captured my attention. With Masters of the Universe being my main collecting focus, I definitely a great deal of my collectible funds there, sometimes buying pricier items and vintage pieces, so I tend to jump into fewer random lines than I have in years past. I passed up a lot of lines that interested me this year as well, including McFarlane's DC Multiverse, Marvel Legends, lots of ReAction stuff, NECA's Back to the Future, and Super7's TMNT Ultimates, simply because of space, money, and enjoying my more focused collection.

A few years back I divided my Top 10 list into two separate categories: My Top 10 Toylines and My Top 10 Individual Releases. Today I'm starting with my top 10 Toylines as it's my standard best of list. These are the 10 toylines (action figures, statues, minifigures, etc.) of the past year that I most enjoyed collecting. They may not always be the best or the most expansive lines, but they're my favorites for one reason or another. As I reiterate every year, the two key word for this list are "my" and "favorite." My list isn't really based on a toyline's true merits and I don't typically go outside of what interests me. This is really a snapshot of the ten toylines I had the most fun collecting last year. As always, these are listed alphabetically rather than by merit. And now, for My Top 10 Toylines of 2020...

It's no secret that Kenner's vintage Aliens/ Predator toyline is one of my favorites of all time and I actually finished my collection early this year. That made it even cooler that Lanard Toys, know for their budget The Corps line, released some very fun Aliens toys that were cheap, colorful, and fit in fairly well with Kenner's offerings from the early to mid-90s. The soldiers are kind of lame but the Xenomorphs themselves are very, very cool and most of the accessories go great with Kenner's Space Marines figures.

This is the second year that Jazwares' Fortnite: Legendary Series has made the list and it had a pretty good sophomore year. It's still strange how the line just drops figure seemingly out of nowhere but, for the most part, figures are easy to get and get restocked frequently. They also continue to have fantastic designs, excellent articulation, and lots of cool accessories. 2021 seems to be off to a good start for this line as well though there are still far too few female figures in the line. C'mon, Jazwares! It's 2021! Bring some more female fighters into the melee.

I think it's pretty safe to say that Hasbro's G.I. Joe Classified Series was the surprise hit of 2020. Fans weren't prepared for it. Hasbro didn't seem to be prepared for it. Target certainly wasn't prepared for it. If you were a collector of this line in 2020 you spent your time talking about how amazing and fun these figures were and how difficult they were to find. Hasbro could have a long running hit on their hands based on a property as even without a movie these figures flew off shelves. If Hasbro keeps up the quality, keeps repaints to a minimum, and meets demand, G.I. Joe could return as a major hit.

#4 Masters of the Universe by Mondo

While Mondo's Masters of the Universe line only had three releases in 2020 (Scarglow, Man-At-Arms, and Mer-Man), all of them were excellent and exciting takes on the heroes and villains of Eternia. Being a higher end line (though these figures are durable and made for messing around with) Mondo only releases a few a year but I think they could easily get around to a quarterly schedule to keep the momentum going. I don't collect much of anything in the 1/6th scale but these have my full attention!

#5 Masters of the Universe Classics by Super7

While Super7 doesn't have the MOTU license anymore they did make sure their last year of releases was pretty incredible including the 1987 movie based figures and Snake Mountain. Not as much product as was released in some years but some major pieces added to my favorite toyline of all time. While I hope the upcoming Mastersverse line from Mattel is compatible wit MOTUC and continues to it, if this is the end it was a grand finale of a line that lasted a little over 12 years.

#6 Masters of the WWE Universe by Mattel
While the line has its detractors I personally love Mattel's crazy mash-up of Masters of the Universe and WWE wrestling. The over the top personalities of the WWE Superstars from multiple eras just blend together perfectly in the MOTU style. Honestly, while MOTU Origins has left me cold so far (it's getting better) the MOTWWEU line got me more excited with each release. I'm glad to see the line's still going with the sixth series just announced last month.
#7 Mythos by HH Toys
Mythos by HH Toys isn't a huge line of but it's a very solid minifigure series that has slowly evolved from an H.P. Lovecraft line to a toyline encompassing the works of multiple author in the weird fiction genre. HH Toys has a pretty cool model where they release some new figures in resin and then collect them in a factory produced set molded in PVC. They're horrifically beautiful minifigures and I love collecting them!
#8 POP! Masters of the Universe by Funko
POP! Star Wars has shown up on my best of list a few times in the past but this is the first time another POP! line has shown up. While most of the Masters of the Universe figures in 2020 were put out under the POP! Television series, I'm lumping all of the MOTU stuff together here. Funko really seems to be approaching MOTU with some excitement again and while they did lots of He-mans and Skeletors, they also put out some surprises like Ninjor, Mosquitor, and Webstor!

#9 Star Wars: The Black Series by Hasbro
Hasbro is on fire with Star Wars: The Black Series as they keep releasing stellar figures. The transition to Phase IV of the Black Series last summer has definitely brought about some of the greatest Star Wars action figures of all time. This year delved into the Prequels, The Mandalorian, and the Original Trilogy along with giving us a Snowspeeder which turned out to be a very welcome addition to the line. This line's heading for a decade of epicness in my book!
#10 Vinyl SODA by Funko
Another year, another new Funko line of pop culture collectibles as they say. Vinyl SODA really appealed to me and ended up being some of my favorite Masters of the Universe toys of 2020. Yeah, I also picked up most of the General Mills cereal monsters, too, but MOTU was where it was at. I hope this line has a long, healthy life as I love these stylized vinyl figures and the really cool faux Soda cans they come packaged in. You know that a line with Moss Man in it has a good chance of being one of my favorites, right?
Well, that's it for 2020's list!  What do you think? What were your favorite lines of 2020? Remember that I'll soon be releasing more best of lists including my top 10 favorite individual releases that weren't part of these toylines and my annual Missing in Action report. Agree with my list? Disagree? Let me know in the comments. Also, as always, here are some fun facts:
# of lines that have appeared on this list multiple years: 5
# of lines from Jazwares: 1
# of lines from Lanard Toys: 1
# of lines from Mattel: 1
# of lines from Hasbro: 2
# of lines from Funko: 2
# of lines from Mondo: 1
# of lines from Super7: 1
# of lines from HH Toys: 1
# of lines featuring He-Man: 4
# of lines based on films from 2020: 0
# of toylines based on video games: 3 (The Black Series also had figures multiple games and the G.I. Joe Classified Series figures do have a video game tie-in, so I'm counting them.)
# of toylines that I never saw hide nor hair of at Wal-Mart: 4.
# of toylines based on R- rated films/M-Rated games, etc.: 1, although H.P. Lovecraft isn't really for kids either....
# of toylines that I was a completest on and bought everything offered: 4
# of toylines that were available through Kickstarter, an small seller online, or an online subscription method: 1
# of toylines in a 1/18th scale or smaller: 3
# of toylines with no articulation: 2
# of toylines featuring actors who played Rocky villains: 3 (Masters of the WWE Universe, MOTUC, and Star Wars: The Black Series)