Welcome to this week's installment of Barbecue's Bonfire! I was pretty busy this week it seems. I watched quite a few movies, played quite a few games, and finished a few books. Before I get into my thoughts on a myriad of subjects, I do want to point out that I just released the annual list of My Top 10 Toylines of 2020. I always have a great deal of fun with it and I'm curious as to what all of you regulars think. Comment on it! I'm curious to hear your opinions, too. What should we talk about first this week? Let's stick with my title theme and go with a watch. 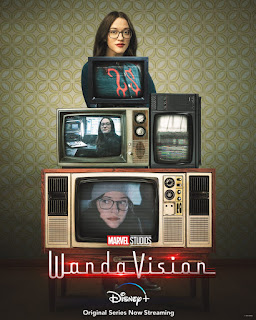 I don't want to spoil too much about WandaVision episode 4 so if you haven't watched it yet just skip on ahead. OK, that being said this week's episode was interesting with Jimmy Woo and Darcy Lewis acting as surrogates for the audience as they're trying to figure out what's going on. Kat Dennings is the only reason to watch Thor: The Dark World in my opinion and I'm glad to see her back in this. I liked the way this episode took the three very unique episodes we've gotten so far and connected them to the larger Marvel Cinematic Universe and to specific other Marvel characters and films. I'm definitely enjoying this show as much or more than any other Marvel show I've watched (Daredevil is the only other one that would come close for me) and I'm liking it better than quite a few of the films, too. I'm excited to see it jump back in to a few decade specific "episode" episodes before we get back into the larger story. There's a terrific pacing here and I hope it's adding up to something big.

More watches, rewatches, reads, and rereads after the break... 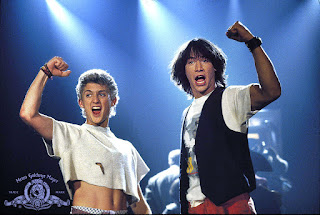 My daughter wanted to watch Bill & Ted's Excellent Adventure again this week so we indulged her. I liked the movie when I saw it as a kid but man, this one has really grown on me since rewatching it a few times with my kid this year. It's just such a fun, positive movie and a great time capsule of the late 1980s. The movie is far more clever than anyone ever gave it credit for at the time. It's silly, yes, but there's an inherent positivity and cleverness that's definitely winking at the viewer, inviting them to just go along with things and join in the fun. Seriously, if you've never watched this trilogy, you need to. It's..most excellent. 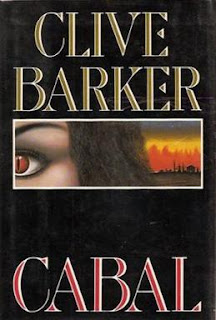 Now how about a read? This week I read Cabal by Clive Barker. The only other Clive Barker thing I've read before were the short stories included in McFarlane's 2004 Infernal Parade toyline, so this was a new experience. For years I avoided Barker, thinking I wouldn't enjoy his stuff based on the the weird McFarlane Tortured Souls line but after watching Candyman, Nightbreed, and Lord of Illusions I decided to give Barker a try. This isn't a long book (Cabal is labeled as a novella and there are four short stories included) and it's fast paced with an interesting prose. It feels like a horror story written by someone who sees themselves as writing a tragic love story, which is a fascinating way to approach this tale of the city of Midian, a place for those who belong nowhere else and away from the living. The movie Nightbreed is based on the book and one of the short stories included, The Last Illusion, is the basis for the film Lord of Illusions. Has anyone else read any Clive Barker? What might you recommend next? I really liked The Last Illusion and I'm curious to find out what other stories Harry D'Amour appears in. 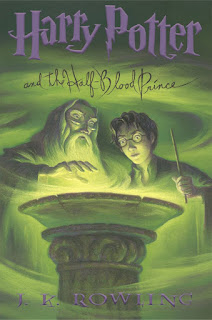 And for reread? My daughter and I finished Harry Potter and the Half-Blood Prince this week! I'd forgotten how good this one was. I've only ever read it once, back in July 2005. It came out shortly after my wife and I got married and I burned through it in under 24 hours to finish it faster than anyone else and to be able to pass it along to my wife. Looking back, I enjoyed reading it more this time with my daughter over about a month. It fit the pacing of the book better, This book has a great story line and I really enjoy how much time J.K. Rowling spends on showing us Voldemort's history. There's not necessarily one huge "set piece" or McGuffin in this one but multiple strands that kind of close out the first five books and set the stage for The Deathly Hallows. It's interesting what I remembered from this one and what I'd forgotten. The scenes in the cave have always stood out to me the most as it's a pretty frightening place. When I think of this book I always think of waiting in line for it at Books-A-Million for the midnight release in 2005 and some guys driving buy in a car yelling "Dumbledore dies on page 556!" I should have used sectumsempra on them. 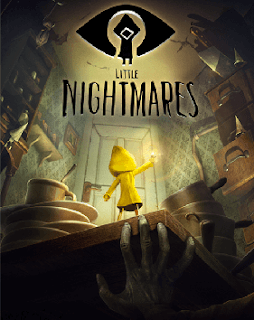 I finished Little Nightmares on the Nintendo Switch this week. It's not a long game (the Switch version has two separate campaigns on it) but I often got frustrated and stopped playing for a few days. If you're unfamiliar with Little Nightmares, it's a bizarre horror adventure platformer that manages to initially seem kind of oddly childlike while really being quite sinister. As a lone child making your way through the domains of some terrifying, oversized creatures who want nothing more than to eat you'll encounter some of the most captivating and eerie environments ever experienced in a game. Unfortunately, the gameplay is a bit uneven. You have little control of the camera and often you can't see what you need to see to progress through the game. It's one of those games that you'll push through because the atmosphere and experience is so good despite how unpolished the controls are. There's a Little Nightmares 2 coming out and I'm definitely interested though I'm hoping for better controls and a longer campaign. 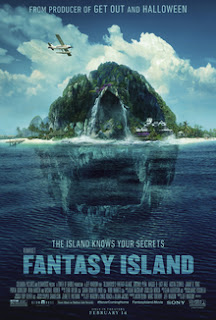 My parents borrow a lot of movies from our local library and they dropped off last year's Fantasy Island reboot after they watched it. It's ...interesting. A reboot of the classic TV series (which I'm familiar with but I'm not sure I've ever seen an episode of), Fantasy Island follows a group of strangers arriving on the titular island to live out the fantasy of their choice. Hosted by the enigmatic Mr. Rourke, the fantasies of the guests each quickly devolve into horrific circumstances. With a larger number of characters and plots than you need for a 2 hour movie, this one really feels like you're watching a truncated version of a television season. Despite the reviews, it's not atrocious but it's not great, either. It squanders an interesting premise and keeps throwing in more and more twists than necessary during the last 30 minutes. It's not boring but it could have been better. Honestly, it feels like it could have been a decent anthology film as every fantasy seems like it could be from a different genre.

Lastly, let's take a look at the most popular reviews of the past week!

Kuiil from Star Wars: The Black Series is one of the newest Black Series figures out there and he seems to be pretty popular. Folks loved this character and it's cool to finally have him on the ever-growing shelf of figures from The Mandalorian. Kuiil turned out. Fortunately the distribution on this series was pretty good so he seems readily available.
Jar Jar Binks from Star Wars: The Black Series is another brand spanking new Black Series figure. He's coming in cases all by himself which doesn't seem like a smart idea, though. Is anyone else afraid that Hasbro's going to flood the market with Jar Jars yet again?
Rey (Dark Side Vision) from Star Wars: The Black Series is the third figure from the most recent series of Star Wars: The Black Series and she seems to be the hardest to find of the new stuff. Hasbro definitely seemed to put the brakes on the product for The Rise of Skywalker so I think we're fortunate this one made it out. Daisy Ridley + a red lightsaber = profit!
Lords of Power from Masters of the Universe Origins was the 2020 PowerCon exclusive set based on the prototypes for the vintage MOTU line when the line was still going to be called Lords of Power. The set is on its fourth week on the list and while it was way, way too expensive, it's also pretty cool for fans who take interest in the development of MOTU. MOTU Origins looks like it's going to have a big year in 2021 and that very well may drive up demand for this set.
Mr. T from Masters of the WWE Universe is a Masters of the Universe themed Mr. T action figure. Do I really need to say anything else? Seriously, he's amazing. I love Mr. T! Me and my wife's anniversary is on Mr. T's birthday? Coincidence? She thinks so! I pity the fool who don't acknowledge that this is Mr. T's third week on the list!
She-Ra (PowerCon Exclusive) from Masters of the Universe Origins is a great tribute figure to the vintage Princess of Power line and a really nice release overall. Mattel always does a stellar job on packaging. I've actually got the standard MOTU Origins She-Ra on the way as well so it'll be interesting to see how it compares to this one.
Well, that's it for this week folks. Stay warm!