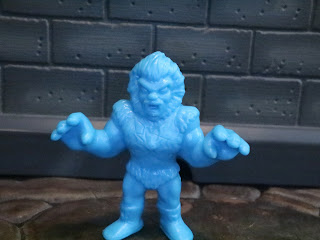 I reviewed the Red Keshi Surprise! Grizzlor earlier this month and today I'm reviewing the Blue version. Honestly, I grabbed a few of these guys because I realized I'd run out of Grizzlor stuff to show off and I wanted to have something scheduled at least every five days. Wouldn't it have been cool if Super7 has released sets of these minifigures molded in a color of plastic that was connected with the character? You know, Grizzlor in brown, Leech in Green, Beast Man in orange, and so on? That would have been a really nifty set for sure. We got what we got, though, so let's check out this version of Grizzlor who is either sad, cold, or looking to join the Blue Man Group after the break... 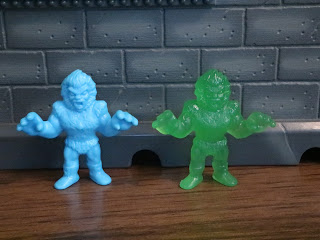 Comparison:
The various colors of Keshi Surprise! Grizzlors came first but the mold was reused later in 2019 for the Trash Can Wave 4 (Slime) set Grizzlor (on the right). The details are a bit easier to make out on the solid colored Grizzlor. 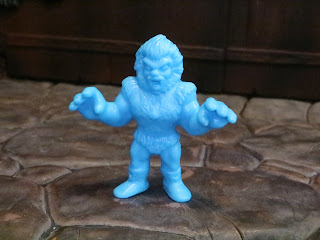 The Positives:
* Blue Grizzlor kind of makes me think of a yeti or abominable snowman. The vintage minicomic played up the idea that Grizzlor was viewed as an Eternian urban legend (Buzz-Off tries to scare everyone by telling tales of Grizzlor around a campfire) so having him look like a cryptid is kind of cool. the blue seems to wash out some of the details, though it's not as bad in person. 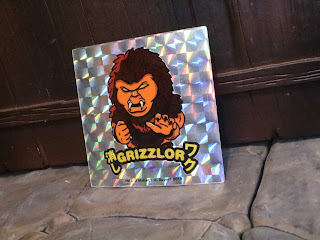 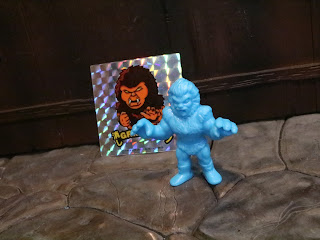 Blue Grizzlor is not my favorite of the Keshi Surprise! colorways for Grizzlor but he's not bad. I'd give him a solid Good rating. The plastic quality is good, the sculpts are fairly crisp, and these guys will fit right in with your other keshi and M.U.S.C.L.E. figures so that's a huge plus. Grizzlor hasn't had that many toys over the years but Super7 sure did give him quite a bit of love during the time they had the MOTU license. Will other companies show Grizzlor the love and attention he deserves? We'll find out! Hopefully he'll make it into Masters of the Universe Origins at some point!
If you're a Grizzlor groupie then check out the vintage Grizzlor, the MOTUC Grizzlor and the alternate 200X Grizzlor head from the Heads of Eternia pack, the ReAction Grizzlor,  Grizzlor (Dark Variant), and Grizzlor (Toy Variant), the Grizzlor minifigure from the M.U.S.C.L.E. Trash Can Wave 4 (Slime), the Keshi Surprise! Grizzlor (red), the POP! vinyl Grizzlor #40 and Grizzlor #40 (Flocked), and the Club Grayskull Grizzlor.
For more reviews from Keshi Surprise! check out the following:
Grizzlor (Red)