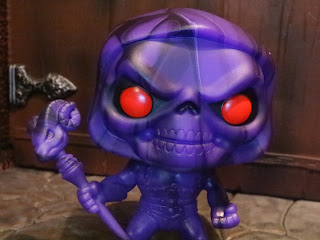 Last year Funko started yet another series of POP! vinyls: The POP! Art Series you might think these would be POP! figures based on Mona Lisa, The Scream, or American Gothic but you'd be wrong. Instead, these are various pop culture characters like Batman, Mickey Mouse, Jack Skellington, and Scooby-Doo given a unique paint finish. I'm really not sure why Funko didn't just keep these in their respective POP! lines since they already do lots of paint variants and stuff but it is what it is, right? I'm actually kind of glad that He-Man and Skeletor made it into this line. I have no idea when or where He-Man is supposed to be released (he hasn't come out already, has he?) but Skeletor was placed on sale at the very end of December during a drop of Funko Shop exclusives. Skeletor is #17 in the series and he's painted with a purple and black color scheme that I suppose is intended to resemble Snake Mountain. Should we take a look at this Skeletor who is intended to be a conversation piece that all of your art critic friends will love and admire? Then let's take a look at Skeletor #17 after the break... 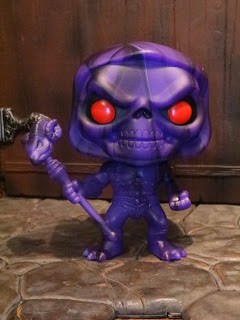 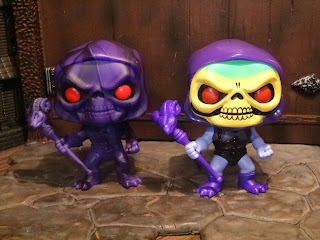 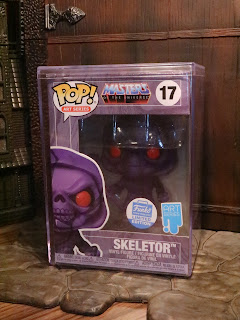 * Skeletor comes in a standard POP! box with gray and black swirls all around it. Since POP! vinyls are very collector friendly you can easily take him out and put him back in again, although he did come shrink wrapped which is something unqiue about this series. I think that's because the POP! Art Series figures actually come packaged in POP! Protectors. More about that in a minute, though. 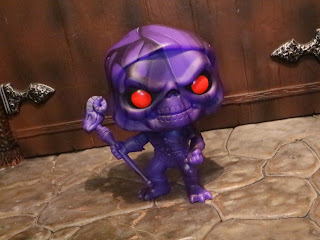 * We've seen this sculpt before multiple times but the look here is very different as Skeletor is all purple with what I'd consider a marbleized paint scheme. It almost looks like a weird purple and black camouflage, like what you'd wear if you were trying to sneak into Snake Mountain I guess. It's kind of cool though the black streaks could stand to be a bit darker like on the package. 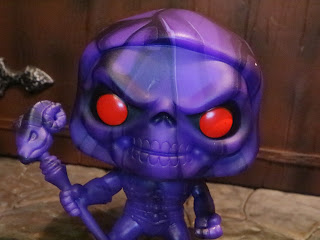 * The headsculpt definitely looks nice with the black highlights and the wicked red eyes. I do really like that detail. 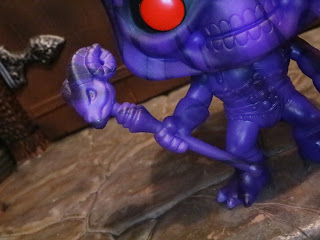 * Of course ol' Skelly's toting around his Havoc Staff! It's got the swirly paint job, too. 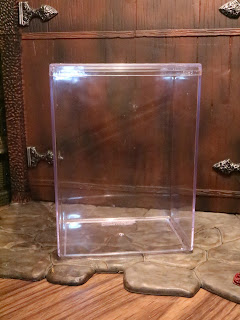 * As I mentioned above Skeletor comes packaged in a POP! Protector. It's a translucent plastic box designed to hold the POP! while packaged and keep it safe. It's not a bad design, it opens easily, and it does have the Funko and POP! logos on top.

* I'm a bit curious as to why Funko is including these on just the art series. Are they really that much rarer or more collectible than the other POP! figures out there? Plus, you're paying more for this figure, so I assume you're essentially paying for the POP! Protector. This guy costs $25 bucks which is around $10-$15 more than your standard POP! exclusive. The POP! Protectors usually cost around $8 so it seems like you're paying more for it. 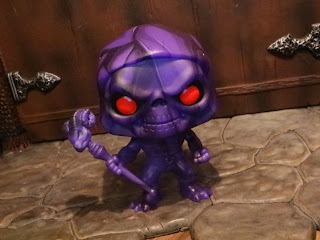 Overall, I'm a bit lukewarm on this version of Skeletor. I kind of like the concept of giving him a cool paintjob (I'm a sucker for the Hikari Skeletors) but the paintjob here just doesn't even seem all that impressive. If the black had been darker with more definition from the purple I think it would have looked better. Also, I'm still not sure why these, of all Funko POP! vinyls, require an included POP! Protector. Anyways, this guy gets an Eh and a 1/2 from me. He's interesting but not super cool, especially considering it feels like $10 to $12 bucks was arbitrarily tacked on. Skeletor says "I could write a book about what you don't know about art!"