Guess what, friends and neighbors? Today is my first snow day of the year! I've been sitting at home playing Assassins Creed: Valhalla this morning before my daughter woke up and while my wife is working but I figured I'd better jump in and do a quick Barbecue's Bonfire. Honestly, while I've been quite busy this week I don't have too much exciting to report. I received the first two High Republic era Star Wars books but I haven't gotten to read them yet and I know the G.I. Joe Classified Series Target exclusives are out there (Viper and Firefly) but considering how bad Covid is in our area and the fact that Target is about 30 minutes away I haven't even gotten to check for them. Plenty of good, though, as I've been getting to spend plenty of time with my family and enjoying lots of cool stuff, though none that I've finished this week (my wife and I are currently watching through the first series of The Black Adder, I'm still playing through AC: Valhalla and Little Nightmares), and I'm in the middle of Stephen King's Rose Madder). We did finish a room escape game, though! 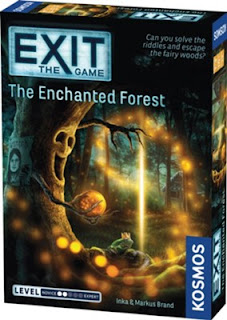 We actually started this one on New Year's Eve with my parents and then finished it later in the afternoon on New Year's Day. I talked about the first game in the Exit series I played last week and we liked this one even better. The Enchanted Forest is a fairy tale themed game with lots of clever, interactive puzzles. It doesn't feel like a traditional room escape game but that's not bad. Rather than looking for hidden objects, finding keys, etc, you're essentially solving a puzzle at each step. We actually made paper snowflakes, used a translucent leaf as a decoder, arranged little cardboard furniture cutouts, and built a bridge to find our way out of the woods. Technically these are one time play games (they involve a lot of cutting) but for the price of around $10-$15 dollars that might be worth it for around 2 hours of entertainment for your family. This one was quite nice and is definitely recommended if you have kids. The puzzles are mostly clever and logical and most of the time if we missed something we realized our mistake once we used a hit.

Just a bit more after the break today.... 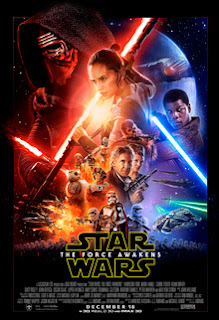 I haven't watched Star Wars: The Force Awakens for a couple years but since we're watching through all of the movies with my daughter it was time to give this on a re-watch. She did watch this one quite a bit when she was younger and, according to her, it's her favorite (she says Empire is the funniest due to Yoda). Watching this one again I still think it's a pretty solid movie and a good beginning to the Sequel Trilogy (which went off the rails after this film). The new cast is fantastic and this film balances the legacy cast and the new cast quite well (well, except for Luke, but we'll get there...) and I still don't think it's just a Episode IV remake like folks love to parrot. The action scenes are quite good, the cinematography is quite lovely, the soundtrack is excellent, and the movie has a snappy pace. I still feel like the movie doesn't "ground" itself well in the Star Wars timeline and galaxy (we actually did need some exposition here) and I'll never forgive Disney/ Lucasfilm/ J.J. Abrams for failing to give the legacy cast one scene together. Still, it's the best of the Sequel Trilogy.

Let's take a quick look at the most popular reviews and articles of the week. They didn't change much this week, did they?

Luke Skywalker (Jedi Knight) from Star Wars: The Black Series is a review from a year ago that jumped back on the list and is holding the high ground for it's third week. Gee, I wonder what could have got folks excited to check out this older review again, huh? Man, Luke's appearance in The Mandalorian season 2 finale was amazing and fans are still talking about it. How long until you think Hasbro releases a version of Luke Skywalker from The Mandalorian?

Snake Mountain from Masters of the Universe Classics is on it's third week and I'm glad folks are reading this one as it was a beast of a review. Super7 really capped this line off with an impressive piece. Even though I have some quibbles with it, I'm sure glad to have it on my shelf.

IG-11 from Star Wars: The Credit Collection is on his fourth week and standing strong. The Credit Collection is a series of repaints based on the excellent concept art shown during the end credits of each episode of The Mandalorian. This is a series of repaints with a new roleplay credit accessory but since they look fantastic and nearly everything based on The Mandalorian sells like nerf nuggets at a podrace, these are hot, hot, hot!

Barbecue's Ramblings: 10 Star Wars: The Black Series Figures We Need From The Sequel Trilogy Era is the first of what is planned to be a series of top 10 lists and stuff just giving me a place to ramble on. It's proven to be quite popular and is here for it's fourth week. Jump over there and let me know what you think! Who has Hasbro neglected from the first 5 Disney Star Wars films.

Luke Skywalker & Yoda (Jedi Training) from Star Wars: The Black Series is now on his second week. Hey, it's a good time to be Luke Skywalker right now, you know? This was a great 2-pack from 2020 and captured a classic scene from the greatest of the Star Wars films!

Obi-Wan Kenobi (Jedi Knight) from Star Wars: The Black Series shows us that people still love the Prequels and, especially, Obi-Wan Kenobi. He's on his third week here. Who else is ready for the Kenobi series?

That's it for this week. Hopefully I can't start catching up on my end of 2020 reviews as some cool stuff from 2021 is starting to trickle in!