Action Figure Review: Skeletor on Panthor #98 (Flocked) from POP! Rides: Masters of the Universe by Funko 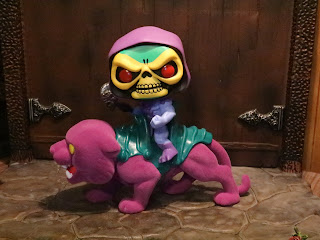 Last year Funko gave us the POP! Rides He-Man on Battle Cat and now they've delivered the evil counterparts of that heroic duo. Here comes Skeletor on Panthor! I've always enjoyed the symmetry of Masters of the Universe so it's fun to have the heroic and evil versions of various characters and creatures. This version of Skeletor on Panthor features a flocked Panthor, just like the vintage toy. It was an exclusive from the Funko Shop that went on sale at the end of December but which shipped and arrived in early January. It's a new toy for a new year, baby! Let's take a peek at the Evil Lord of Destruction and ferocious feline mount after the break... 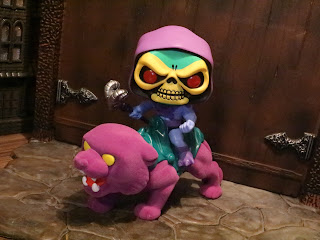 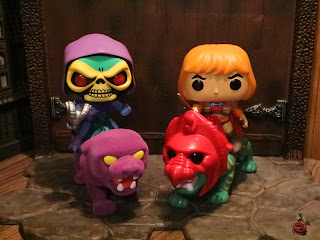 Comparison:
* Looking closely at Skeletor on Panthor #98 and last year's He-Man on Battle Cat #84, it's pretty clear that the bodies of the cats are the same. Honestly, I wonder if the heads are the same on the cats as well, just with Battle Cat getting the helmet over his. 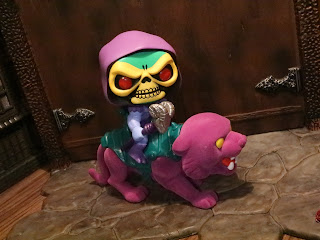 The Positives:
* Panthor and Skeletor make for a pretty decent sized POP! vinyl. Like nearly any other POP! out there Skeletor has a swivel head. Panthor is just a solid figure but the pair looks great together. 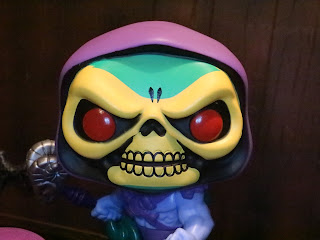 * This isn't a new Skeletor headsculpt at all but doesn't it look fantastic? The yellow and green mixture on the skull really give it a different look and the dark lines around the eyes and teeth highlight old bonehead's features perfectly. It almost has the look of a sugar skull design which is brilliant. Skeletor looks amazing here! 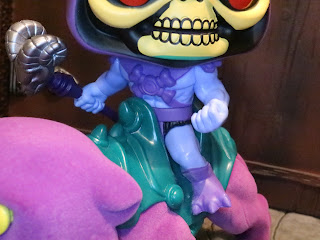 * This is a very classic looking Skeletor and while he's not removable he is, clearly, a separate piece attached to Panthor's saddle. The sculpt and paintwork on Skeletor looks just fine here. 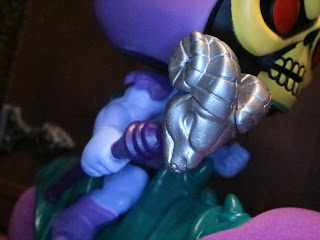 * He's toting around his Havoc staff of course! The head is painted silver like the Filmation version or the 200x version, which helps make the details of the staff pop a bit more. 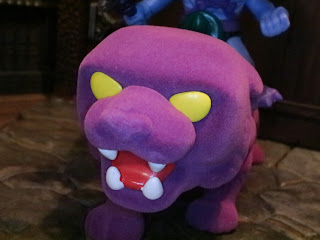 * Like in the vintage toyline and nearly every other MOTU toyline out there, I'm pretty sure Panthor and Battle Cat are the same sculpt with just a few differences. While Batte Cat has his helmet, Panthor's just showing off his menacing yellow eyes! 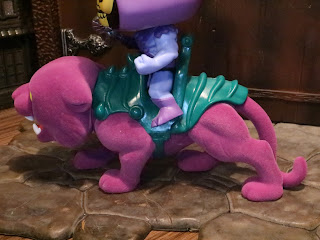 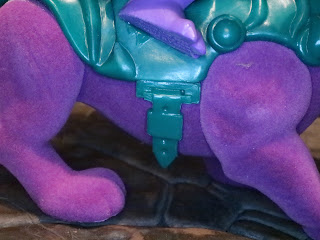 * Just like the vintage toy the POP! Panthor's saddle has the strap and everything keeping things in place. It's a cool little detail that I really like for some reason. 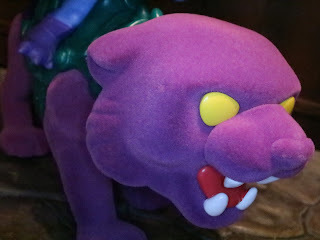 * This is the Funko Shop Exclusive version of Panthor and it's flocked while the regular release isn't. The flocking look great and definitely gives Panthor the "fuzzy" look that the vintage toy had. 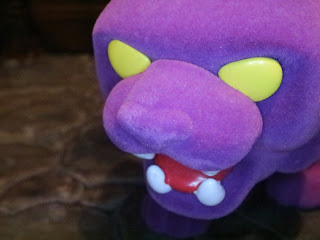 The Negatives:
* Why is Panthor's nose flocked over instead of being painted black? He would have looked amazing with a black nose. It's not as awful as The Loyal Subjects' flocked Panthor but it's still pretty frustrating. 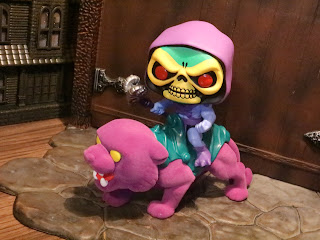 After getting He-Man on Battle Cat I think we all new that Skeletor on Panthor was coming and it's cool to have them so we can display the archenemies and their respective steeds together! Skeletor on Panthor looks great with the flocking and the colors are really quite nice on both characters. I really love the paintwork on this Skeletor's head! this set costs a bit more than the standard figure, though, and since it's an exclusive it'll now cost you more on the aftermarket if you're trying to track it down. It's a Great set, though, but I will be reviewing the standard Skeletor on Panthor soon, too, as mine is on it way to me.