Old School MOTU: She-Ra from Dorbz: Masters of the Universe by Funko 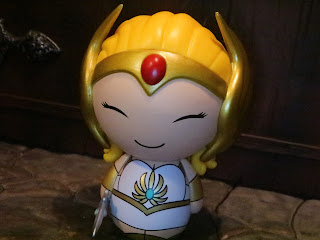 She-Ra: Princess of Power has an interesting relationship with He-Man and the Masters of the Universe. While they are set in the same universe (but not in the same dimension!), they clearly have two different identities, particularly when it comes to licensing. While the vintage toyline Masters of the Universe contained the Evil Horde, the She-Ra: Princess of Power toyline was a completely separate line. Filmation really joined the two properties, though, with lots of great crossovers. Other things like the Power Tour and the epic 1985 Macy's Thanksgiving Day Parade further gave us glimpses of the connections between worlds of Eternia and Etheria, but the 1980s She-Ra was relegated only to memories for more than a decade. When she finally returned it wasn't in the 200x/ MYP cartoon series but as a SDCC 2004 exclusive figure for the 200x MOTU line. Maybe that reignited fan interest because She-Ra was a massive part of Mattel's Masters of the Universe Classics, AKA the greatest toyline of all time. Something crazy has happened since then, though: She-Ra often only appears in toylines as an exclusive. Take the Dorbz She-Ra here: She was actually the first figure released in the Masters of the Universe range of Dorbz figures as she was part of the 2016 12 Days of Funko releases. Limited to 3,000 units, She-Ra is one of the more difficult figures to track down in the line, although she's not that tough as Dorbz aren't crazy pricey. Still, it's a testament to She-Ra's popularity that even in a largely unpopular line she's still one of the most desired figures. Anyways, let's check out this Funko Shop exclusive She-Ra after the break... 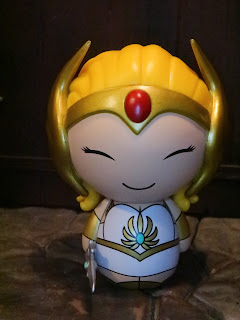 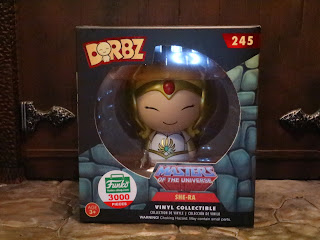 * Here's a shot of She-Ra packaged. The package is mostly collector friendly (there is a round piece of tape holding the box closed on top but you can just open it from the bottom) and it features the Castle Grayskull brick design that most MOTU product used between 2013 and 2019. 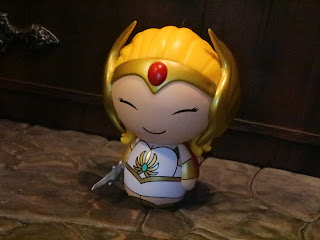 * If you're at all familiar with Dorbz then you know what to expect: A Little People-like body shape, a round head with closed eyes and a smile, and painted body details rather than sculpted elements. She does have a cape and a sword, though, so she does feel a bit more deluxe than most other Dorbz. The paintwork is neat and clean and she has a great, classic She-Ra look. It's clearly the Filmation She-Ra design, but that's the most popular and my favorite, so I'm down with it. 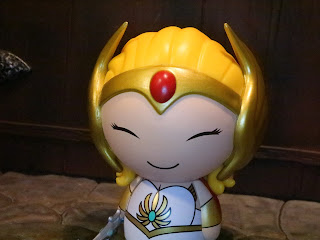 * She-Ra has the same cute face that the rest of the Dorbz have although her eyes do have some feminine eyelashes painted on. She also is absolutely rocking her tiara. The sculpt and design on this is excellent and it really makes her stand out from so many other Dorbz figures. Odd fact: She-Ra is the only female in the MOTU Dorbz line. Teela wasn't released in Dorbz or in POP! vinyl. Weird, huh? The only line to get a Teela is the Pint Size Heroes. What the heck is Funko thinking? 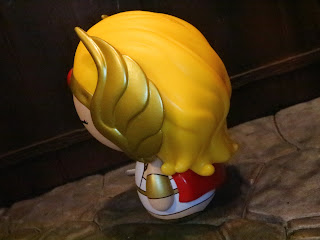 * Here's a side look at the cape, wings of She-Ra's tiara, and her hair. She seriously has a lot of cool details on her for such a simple little figure, doesn't she? 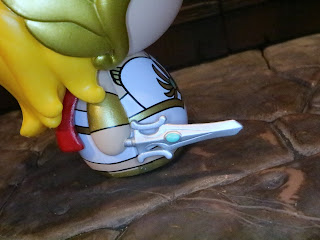 * Like her brother Adam, Adora is toting around a sword as well. She-Ra is carrying the Sword of Protection, complete with the blue gem of protection in the middle. It's very Filmation inspired and painted with an excellent metallic paint that really helps it to stand out. 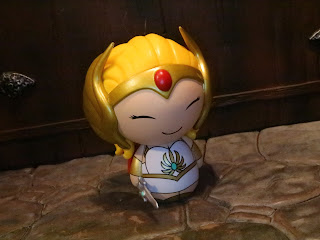 While the Dorbz line didn't last very long, She-Ra definitely kickstarted it with a bang. She's definitely one of he best Dorbz in the series and really stand out on the shelf. While no other line has delved into the world of Etheria like Masters of the Universe Classics, it's still nice to see other lines at least acknowledge She-Ra: Princess of Power. She-Ra is a Great Dorbz figure and a nice addition to the collection. I've got one more Dorbz review coming up in a day or so, so stay tuned!


If you're a She-Raver who digs She-Ra/ Princess Adora then check out the figures I've reviewed: The Masters of the Universe Classics Galactic Protector She-Ra, the Club Grayskull She-Ra, the ReAction She-Ra, the She-Ra from the Super7 Battle for Etheria 2-Pack, the 1/6th scale Starburst She-Ra, the M.U.S.C.L.E. slime She-Ra, the Sonic Wacky Pack She-Ra and She-Ra: Gold Edition, and Mattel's She-Ra and the Princesses of Power She-Ra, Force Captain Adora, She-Ra vs Shadow Weaver, and Battle Armor She-Ra and Swift Wind.

For more Dorbz: Masters of the Universe reviews, check out the following:
He-Man
Man At Arms