Wrapping Up 2020: Man-At-Arms from Hot Wheels Character Cars: Masters of the Universe by Mattel 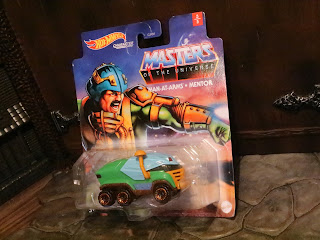 Mattel was all about getting the Masters of the Universe brand into stores on a wider variety of products in 2020 and today I'm checking out one of the odder releases from last year: Man-At-Arms from Hot Wheels Character Cars. Mattel has a long history of using the MOTU brand on Hot Wheels cars but this is a pretty different animal. Rather than just repainting a car with the character's image on it this is a car designed to look like Man-At-Arms. So, for example, if Man-At-Arms were included in the next installment of the Pixar film Cars or if there were a wacky MOTU kart racing game, this is probably what he'd look like. Intrigued? So was I. I actually stumbled upon these in the grocery store nearest to me on a couple recent trips, so that was nice as well. Let's take a look at Man-At-Arms in car form after the break... 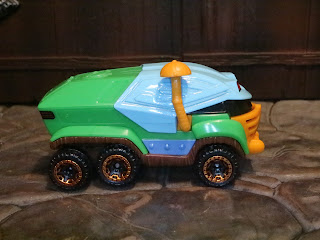 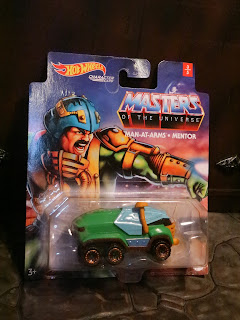 * These come packaged on a simple blister card, just like any other Hot Wheels car, though the art on the card is pretty rocking. Interestingly, the packaging also offers the international name of Mentor for Man-At-Arms which I know is what he was called Brazil. That's kind of cool. 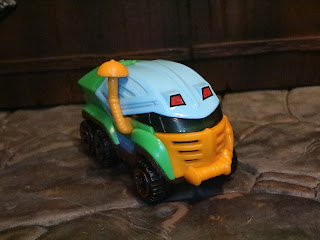 * Mattel has done Character Cars for a wide range of properties (Disney, TMNT, Star Wars, Super Mario Bros.) so it's cool to see them get around to MOTU. Like the heroic master of weapons himself, the Man-At-Arms car is armored up and ready to plow through Skeletor's... junkyard, I guess. The top of the car is a slightly glittery light blue designed to replicate Man-At-Arms' iconic conquistador inspired helmet. 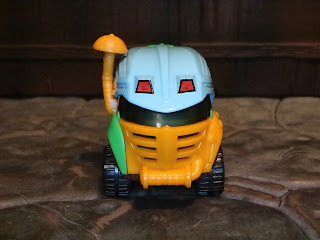 * From the front the windshield is black and peaks out above a orange grill, just like Man-At-Arms' face is visible between his helmet and the face shield on his chest armor. The driver's side fender is also more armored with the orange grill extending over it (just like MAA's asymmetrical shoulder armor). Oh, and the tank on the front of MAA's armor is also present on the grill. 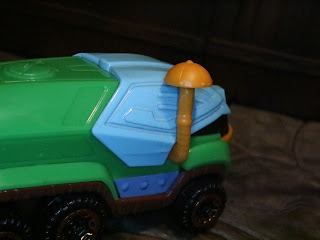 * On the right side of the car you can see a smokestack of sorts that's designed to look like Man-at-Arms' mace. That's a great detail, isn't it? That's like the first thing I noticed when I found these cars on a grocery trip and it blew my mind. 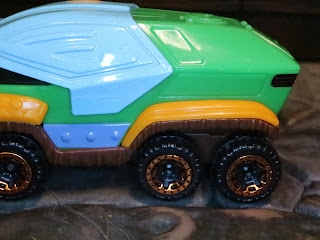 * The asymmetrical orange armor of Man-At-Arms extends all the way down the side of the car. There's also a cool nod to his furry trunks: The edges of the car are brown and look like they're covered in a furry texture while the bottom is blue with rivets, kind of like the belt Duncan wears. That's a crazy detail! 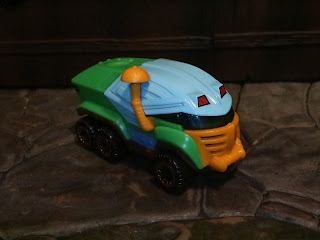 I'm liking this Man-At-Arms car way more than I thought I would Rather than just being a regular Hot Wheels model with a MOTU image on the side or even the color scheme of a character, this vehicle actually takes into account a lot of the elements of Man-At-Arms' iconic costume. It's instantly recognizable to anyone familiar with the character and it's honestly pretty cool. Strange, sure, but very cool. I like seeing different stuff like this and while I wouldn't pick it up for any other property, I love collecting anything MOTU so this definitely got me. It's actually a Great little vehicle!