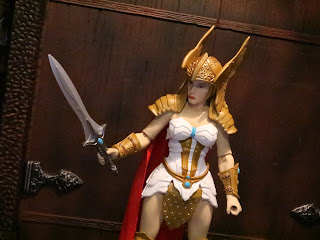 On Friday I was surprised to receive a box on my porch which included the two newest Masters of the Universe inspired figures from the Four Horsemen's Mythic Legions line. I ordered these last January and while the Four Horsemen did offer a couple "pre-release" figures via PowerCon 2020, these are now officially out for collectors who pre-ordered them. Mythic Legions is a very expansive fantasy toyline but due to their history with and love for MOTU the Horsemen have found cool ways to pay tribute to the heroes and villains of Eternia and Etheria in the world of Mythoss. Today I'm looking at Dorina Onoris, a beloved folk hero known for her compassion and spirit who led a rebellion against the evil Lord Draguul. Yes, Dorina Onoris is inspired by She-Ra, Princess of Power, and she looks fantastic. Seriously, this might be one of the best "She-Ra" action figures ever released. Let's take a look at Dorina Onoris after the break and see if she has the power, too... 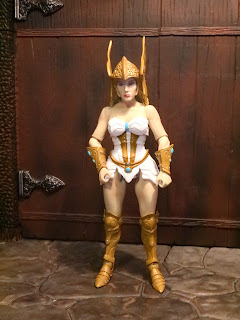 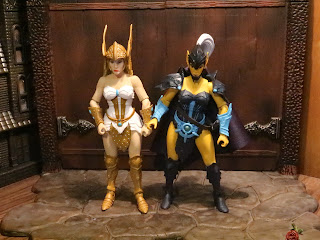 * The Mythic Legions figures take advantage of reuse to create multiple characters, so Dorina Onoris (left) shares parts with previously released figures. On the left is the only other female Mythic Legion figure I own, Malynna, and a close look shows that they share thighs, torsos, upper arms, hands, and alternate armored helmet. It's not really noticeable and probably keeps the costs down while also keeping a uniformity  in the line. 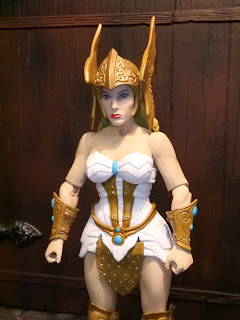 * Dorina looks incredible. Her white and gold outfit with some blue highlights on the various gems and studs really captures the look of She-Ra's outfit while also giving it a bit more of an armored appearance. It reminds me of  Stjepan Šejić's "She-Ra vs the Horde" which is one of my favorite pieces of MOTU artwork. The armor is covered with details, including a cool scale mail piece hanging down from Dorina's waist. The paintwork is perfect and I love how bright the white and the gold colors are on it. She really stands out! 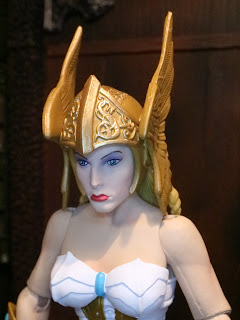 * I do believe that the headsculpt is reused from a previous figure but I'm not sure who. It's an excellent headsculpt, though, and the Valkyrie inspired helmet is incredible. Dorina Onoris' face is quite lovely but also very serious looking. She has a stern expression that definitely should put a bit of fear into the hearts of Lord Draguul's forces for sure. 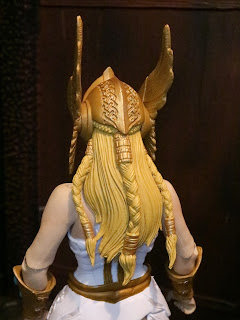 * From the back you can see more of Dorina' intricately sculpted helmet and her gorgeous Nordic inspired hairstyle. I'm playing through Assassin's Creed: Valhalla right now and I wish I could give Eivor a hair design this complex. Maybe at some point? (My Eivor has red hair, though, as I wanted her to look more like Teela). 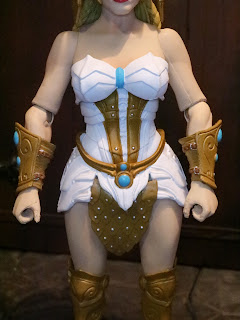 * Here's a close-up shot of Dorina's armor. Those bracers are incredible! 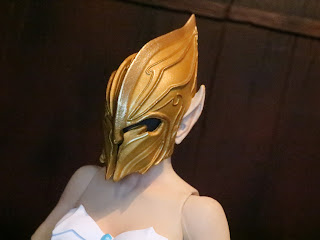 * This is the head Dorina Onoris comes packaged with but it seems like it should be the alternate head. She's listed as being a human but this definitely has elvish ears. The helmet definitely reminds me of the type of armor you'd see in The Elder Scrolls: Morrowind which is a huge plus in its favor. I don't plan on displaying Dorina with this helmet but it's still quite nice. 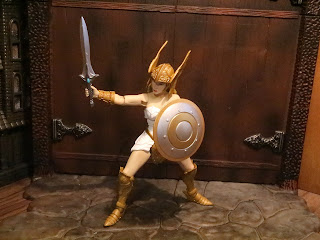 * The articulation on the Mythic Legions line is pretty solid. It reminds me a lot of Masters of the Universe Classics except the joints have a better range of motion and there are a few extra joints such as better ankles, hinged wrists, and the balljointed mid-torso. Dorina Onoris is very sturdy and well made. The Four Horsemen really have done an excellent job on the consistency of the quality of this line from everything I've heard and experienced. 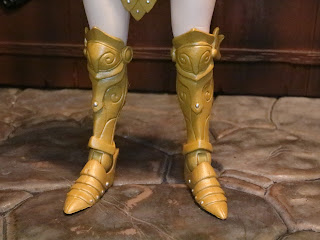 * Dorina Onoris' boots are very elaborate and gorgeously detailed. They're stunners for sure. 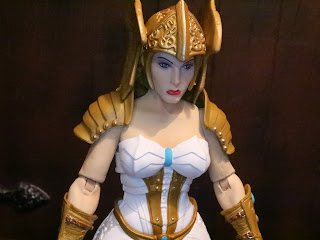 *  Interchangeable shoulder pads are one of the highlights of this line and Dorina's can be easily attached to the figure. They also help hold the cape on, but we'll get to that in a minute. 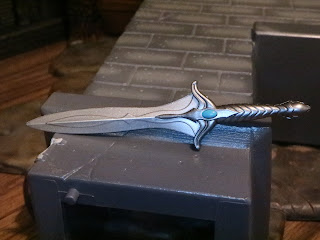 * Dorina's short sword is really, really cool. It reminds me of a cross between the Sword of Protection and Sting from The Hobbit and The Lord of the Rings. It's very ornate and fits perfectly with Dorina's design. 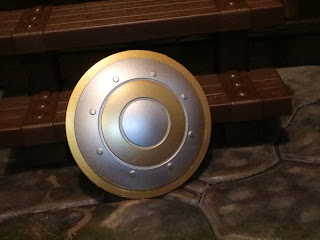 * The shield is a bit plainer but it matches the colors of her armor and her sword, so I'm down with it. It's a great sculpt still, just simper than most everything else. 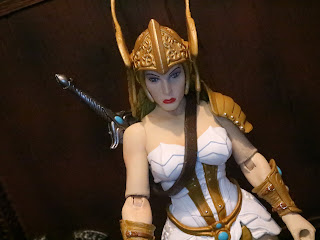 * To stow her sword when she's not using it, Dorina has a strap that can fit across her torso. There's a slit in the strap that allows for the sword to slide in and stay securely on her back. Most figures seem to come with one of these so if you have any other Mythic Legions figures then you're probably familiar with it. 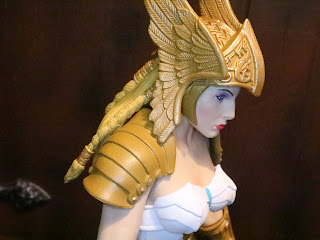 * The bottom of the wings on Dorina's helmet are quite long and they tend to bend against her pauldrons. It'll take a lot of futzing to get things right and you still may not be entirely happy. 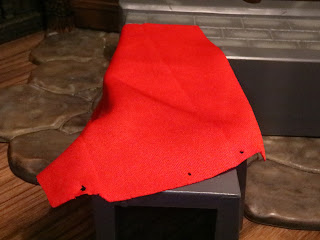 * There's actually a page dedicated to putting on the Mythic Legions capes. I like it the look but you have to stretch the holes out which looks like it's already started some tearing on mine. I wish we'd gotten a simple strap that goes around the neck like Malynna had. 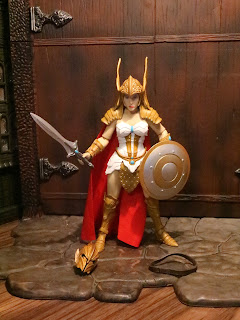 I've been very happy with most of the Mythic Legions and Dorina Onoris is perhaps my favorite yet. She's an excellent figure! Seriously, she's one of the best She-Ra figures ever made and she's not even an official She-Ra figure. I love the more intricate designs of this line and I'd love to see Mattel's Mastersverse line have designs for the MOTU crew more similar to Mythic Legions, You know, kind of like a 200x/ MOTUC hybrid. Anyways, Dorina Onoris is Epic and well worth picking up. You'll be paying a bit more for her now if you have to go through an E-tailer, but if you preordered her or get her through Store Horsemen you'll be thrilled with the purchase. I've got Lord Draguul scheduled for review as well, so you'll probably see him in the next week or so as well. What other MOTU characters would you like to see paid homage to in Mythic Legions?

This is the first figure of Dorina Onoris I've reviewed on the site. For more figures from Mythic Legions check out the following:
Cowarros
Kronnaw
Malynna
Orc Legion Builder 3
Purrrplor