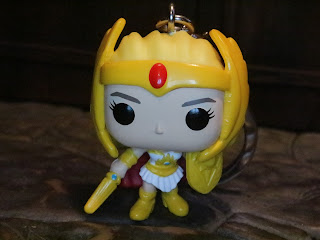 It's She-Ra! And she's not an exclusive or a limited release this time! This is a standard She-Ra release from a licensed company! I love that the world of She-Ra: Princess of Power is part of Masters of the Universe and while Mattel did an awesome job with including the denizens of Etheria in Masters of the Universe Classics most other toylines, especially those from companies other than Mattel tend to only give us She-Ra as an exclusive or chase variant or something similarly impossible to find. Funko has two regular She-Ra releases out right now and I'm starting things off with a look at the She-Ra POP! Pocket Keychain. She-Ra is the defender of Etheria and the Crystal Castle and now she can guard your keys, too. Let's take a look at this cool little POP! keychain after the break... 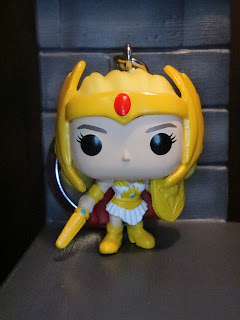 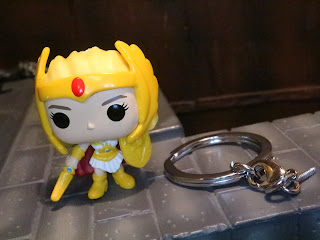 The Positives:
* One of the things that I consider a plus is that the keychain is completely removable from the figure. Now it's a very solid looking keyring, don't get me wrong, but it's nice to have the option to simply display a little mini She-Ra POP! rather than a keychain if you want. Just unscrew the keychain and you'll have a little POP! with just a tiny hole in the top of the head. 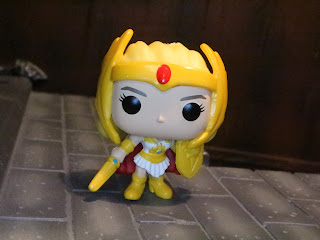 * Unlike most every version of She-Ra released, this sculpt isn't directly based on her Filmation appearance. Instead, it seems to be based on the vintage 1985 action figure of She-Ra from the Princess of Power line. It's not a direct recreation but she does have the asymmetrical design on her dress and the Sword of Protection and shield from the vintage toy. 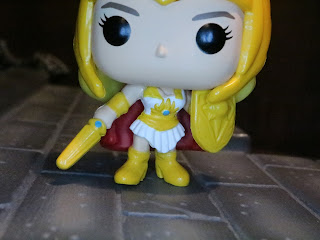 * The dress and weapon sculpts are quite nice and all of the paint work is really clean and sharp. I like the addition of the blue gem on She-Ra's sword and dress as it adds a bit more to the design. 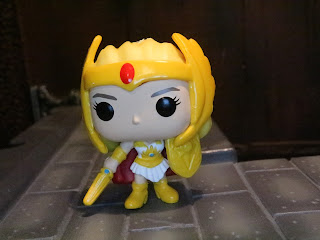 The Negatives:
* My only complaint with this figure is that all of the parts of She-Ra that should be gold are a dark yellow instead. Why is that? Funko uses metallic paint on plenty of POP! vinyls so it's not something they're unable to do. It doesn't look bad but it's very off for She-Ra's design and it makes it harder to visually differentiate between her hair and her tiara. 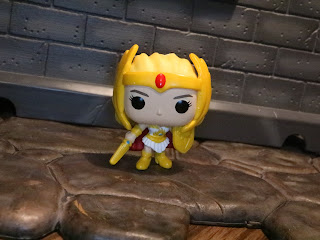 I'm going to talk a bit more about this She-Ra sculpt when I get around to reviewing the full-size POP! vinyl (soon!) but for now I'm giving the She-Ra POP! Pocket Keychain a Good. I really like the sculpt but I'm just not wild about the decision by Funko to use dark yellow instead of gold for all of She-Ra's details. It just looks off to me. Still, this is a neat little keychain and there's not a ton of She-Ra merchandise out there, particularly stuff based on the vintage toyline, so this already is a pretty desirable item just from that perspective. Think Funko will tackle any other non vintage Horde Princess of Power characters?

If you're a She-Raver who digs She-Ra/ Princess Adora then check out the figures I've reviewed: The Masters of the Universe Classics Galactic Protector She-Ra, the Club Grayskull She-Ra, the ReAction She-Ra, the She-Ra from the Super7 Battle for Etheria 2-Pack, the 1/6th scale Starburst She-Ra, the M.U.S.C.L.E. slime She-Ra, the Sonic Wacky Pack She-Ra and She-Ra: Gold Edition, the Dorbz She-Ra, the Vinyl SODA She-Ra, and Mattel's She-Ra and the Princesses of Power She-Ra, Force Captain Adora, She-Ra vs Shadow Weaver, and Battle Armor She-Ra and Swift Wind.

For more reviews from POP! Pocket Keychains check out the following:
Chucky from Child's Play 2
He-Man
Posted by Barbecue17 at 1/21/2021