Action Figure Review: Sy-Klone #995 from POP! Television: Masters of the Universe by Funko 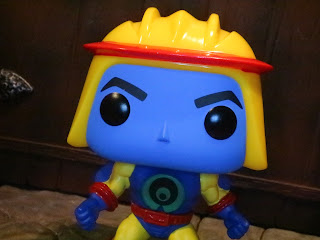 This slow and steady marathon of checking out all of the newest Masters of the Universe POP! vinyls continues with a look at Sy-Klone, the Heroic Fist-Flinging Tornado! Sy-Klone is an interesting character and as a kid I somehow ended up with two of him. I have no idea how! I feel like I either found him somewhere or one of my cousins gave him to me, and I never turn down free toys! While Sy-Klone had limited appearances on the Filmation series he was developed a bit more in other media sources such as in the Golden Books and the UK Comic series and the 200x Mike Young Productions cartoon series. In the Golden Books he was a circus performer transformed into a cyborg by Skeletor, the UK comic series he was an athlete named Dash-Shel who was transformed into a Cyborg by his father after an attack by the Horde (kind of like DC's Cyborg), and in the 200x series he is the mystical guardian of the Legacy Stones on the island of Anwat Gar. Oh, and in the MOTUC canon Sy-Klone is actually a Gar (like Keldor) who wears ancient Gar armor. And now he's a POP! vinyl! Let's check this guy out after the break... 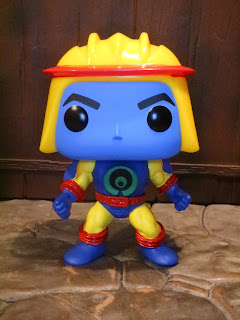 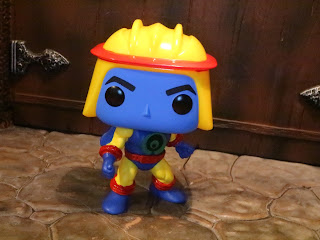 * Sy-Klone is bright, bold, and decked out in primary colors! I love how he stands out on the shelf. Like most other POP! vinyls he has a swivel head so you can pose him a bit. Of course, you could spin his head all the way around to try to replicate his tornado action feature. This would have been a really cool figure to add a waist joint too, wouldn't it? Alas, we didn't get one. 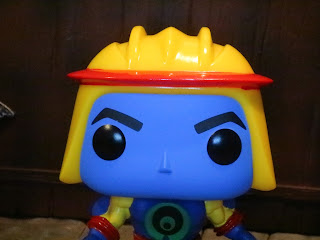 * The headsculpt is just fine. It's a pretty basic looking face, just in blue. That's accurate to Sy-Klone, though. He's also wearing his armored,  samurai inspired with the red ring around the brim. 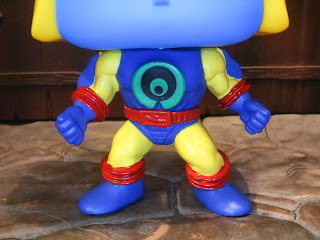 * I love the work on the body, particularly the funky radar pattern on Sy-Klone's chest. It was a cool feature on the original figure but it was a lenticular there. This is just a simple painted detail but it still looks pretty cool. 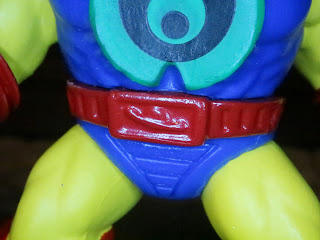 * I really like this cool little planetary logo on Sy-Klone's belt buckle! It's a great little detail from the vintage figure that has been faithfully recreated here. This could have easily just been a simple red buckle but it's nice to see Funko put some more effort into it. 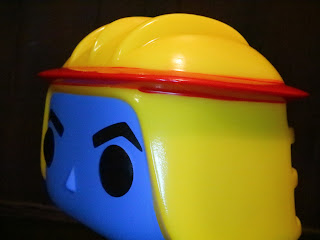 
* Red and yellow paint often tends to bleed and there's quite a bit of paint bleed on Sy-Klone, particularly on the red rings on his helmet and boots. It definitely hurts the usually clean aesthetic of a POP! vinyl when it happens. 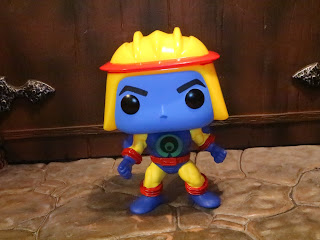 Sy-Klone is quite cool because he's definitely a character that doesn't always make it into every MOTU product range and it's always fun to see characters beyond the usual A-list crew. Sy-Klone is a Good POP! but it would have been nice if he had a spinning pose, an actual lenticular sticker on his chest, his shield, or neater paint application. It's weird how some figures are designed holding their vintage weapons while others aren't, isn't it? Along with Moss Man, Sy-Klone gets us a step closer to having the 1985 Heroic Warriors in POP! form. Now bring on Roboto!

The only other Sy-Klone item I've reviewed on the site is the 200x inspired Sy-Klone head from the MOTUC Heads of Eternia pack.