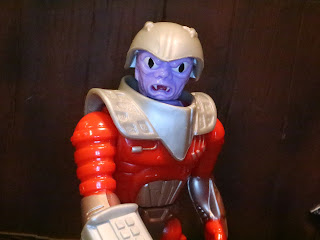 JuNe Adventures is coming to a close soon but I'm hoping to at least get one more review out before the end of the month. I hope you've enjoyed this opportunity to look at a variety of toys from one of the most unique (although often maligned) eras of Masters of the Universe. Today I'm going to check out Flogg, the leader of the Evil Space Mutants! Known as Brakk in his European release, Flogg was released as part of the original 1989 series of figures. A prominent fixture in the toyline (he got a rare variant in the fourth series, Hook 'Em Flogg), the minicomics, and the Jetlag Productions cartoon, Flogg was definitely the #2 villain behind Skeletor in the New Adventures era. Something else special about this figure is that this is actually my childhood Flogg. I ended up selling off most of my New Adventures figures as a kid but for some reason Flogg hung around. Let's check out this Flogg figure after the break and see if he can still whip it good! 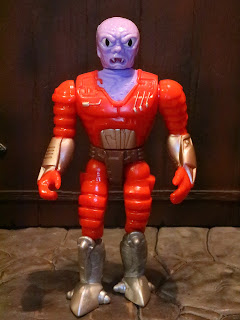 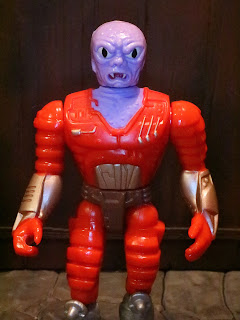 * Flogg has a fairly cool looking sci-outfit. It looks very padded with lots of armored bits all over to give him some extra protection in battle. He's also got lots of wires and such across his chest, although the ends of those are covered up by his shoulder armor, which I guess makes sense. It's almost like everything it attached together. I really think with a bit of a change in proportions Flogg easily could fit in with the classic Masters of the Universe line. I still wonder if it would have been more successful if Mattel had tried to launch the New Adventures brand expansion as a series of new factions for the vintage line? 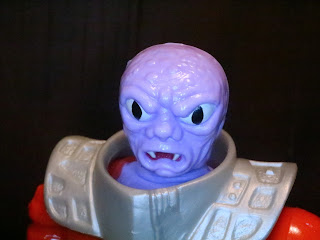 * Flogg has a bulbous purple head with large eyes and some pointy fangs. He's from Denebria, like most of the other mutants, and his alien features are nicely captured here. 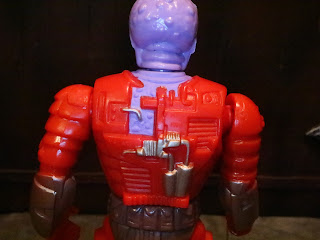 * The back of the figure is even more detailed than the front! Flogg has all sorts of stuff back here including some sort of gas canisters and pockets on his belt filled with all kinds of space gear. 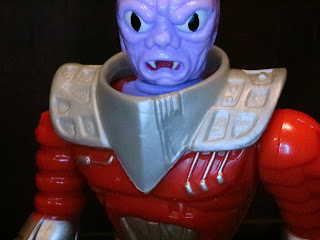 * The giant silver collar is actually snap on armor. It fits on Flogg very well and snaps on securely, giving him a slightly bulked up appearance. 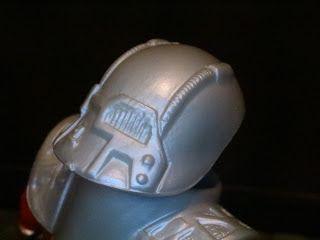 * He also has a conquistador styled helmet (kind of like the concept versions of Man-At-Arms) that fits securely on his head. It's not just a piece of metal, though: There are tubes and electronics panels on it. It's very sophisticated! 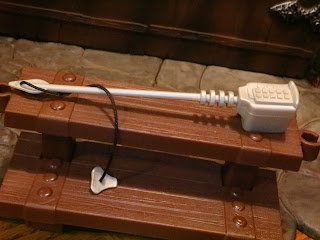 * I've always thought that Flogg's laser whip looked more like a fishing pole than a whip. It's got a metal tip on the string for the whip and lots of button on the handle. Flogg can grip it well and it does swing around quite nicely. It's interesting that Beast Man, Skeletor's number 2 in the classic line, also used a whip. 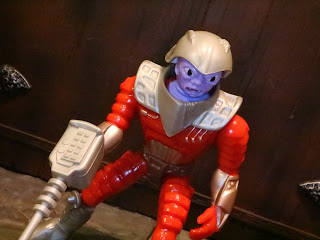 * Every figure in the He-Man line proclaimed that it had "Masters Action!" and Flogg's is his ability to whip. Turn his torso to the right and his right shoulder pulls back while his left arm raises up to protect himself. Release it and he whips! It works quite well! 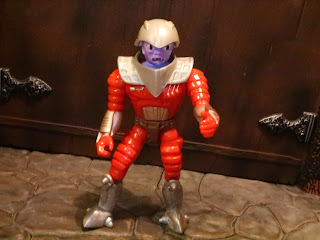 * Flogg moves like most other figures in the line although his knee joints are very rubbery (be careful with them) and his action feature does limit his movement a bit. 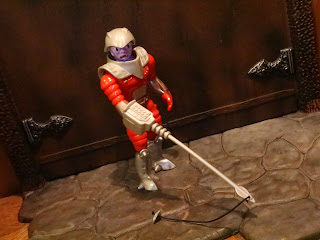 I really like Flogg. With two securely fitting armored pieces, a unique design, and a cool action feature, he's a pretty good representation of the He-Man line that isn't He-Man or Skeletor. I liked him a kid OK but I think I like him a bit more now. He's quite colorful, too, with his red spacesuit adding a much needed splash of color to the Evil Spacer Mutants' ranks. He's a Great and a 1/2 figure and if you're looking to add him to your collection you should have little trouble as he is plentiful and not terribly expensive. Hook 'Em Flogg, though? That guy is a beast to track down it would seem...