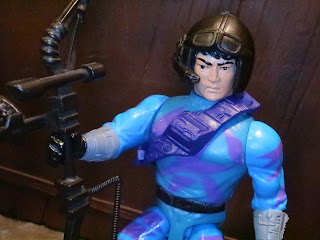 Today for JuNe Adventures I'm checking out Nocturna, a member of the Galactic Guardians from the vintage He-Man (AKA New Adventures) toyline. Released in the second series of figures in 1990 Nocturna seems to be a master of martial arts who is decked out in a stealthy blue and purple camouflage suit. While Mattel did release few of the Galactic Guardians/ Galactic Protectors in Masters of the Universe Classics, Nocturna didn't make the cut. He almost did, though, as there was an episode of He-Man.org's Roast Gooble Dinner where former Masters of the Universe brand manager Scott "ToyGuru" Neitlich did give a month and year that Nocturna was scheduled for to show how deep MOTUC was scheduled to go. Unfortunately, plans changed and Nocturna never got made, and thus his sole toy incarnation is this vintage figure. I really like Nocturna though admittedly he does look like he'd fit in better with G.I. Joe: A Real American Hero or C.O.P.S. and Crooks rather than alongside of He-Man and the Masters of the Universe. The New Adventures brand expansion just had a different feel from classic MOTU. Let's take a look at Nocturna after the break! 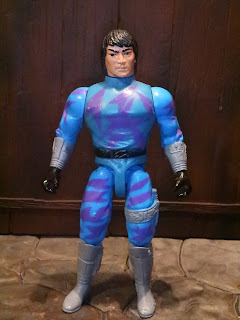 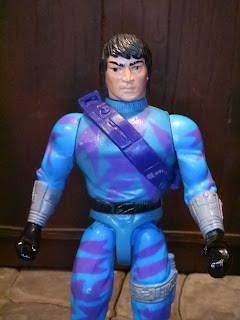 * As I mentioned in the intro, Nocturna really does not look like a Masters of the Universe figure. Decked out in a camouflage jumpsuit with a bandolier and tactical boots Nocturna seems more like he could have been a member of G.I. Joe, C.O.P.S., or even the RoboCop team. Prior to the creation of New Adventures there was some concept work of a He-Man line where He-Man was more like the classic G.I. Joeor Adventure Team and sported different outfits as a military operator. Nocturna honestly seems like he could be inspired by those concepts, especially with his bandolier, high-tech bracers, and the knife attached to his hip. I actually really like the outfit as it's quite cool and makes Nocturna stand out from the most other figures in the line. Heck, he stands out from most other figures the MOTU as a whole. 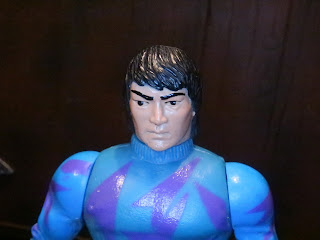 * The regular humans of the New Adventures line don't have the most exciting portraits, but I do like the fact that you typically get to see the character's face without a helmet. He has a very serious and stern expression which seems fitting if he's kind of the "special forces" guy for the Galactic Guardians. There's also a lot of detail sculpted in his hair. 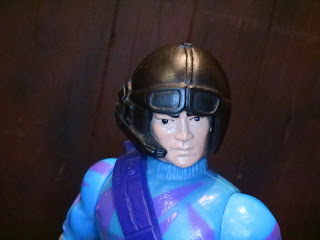 * Nocturna has a removable helmet and, again, it definitely seems more fitting for G.I. Joe or C.O.P.S. rather than something you would think of from a He-Man toyline. Still, it's a cool piece. The armored black helmet has a mouthpiece on the right side and goggles. You can actually tilt the helmet down a bit, too, allowing the goggles to cover Nocturna's eyes. 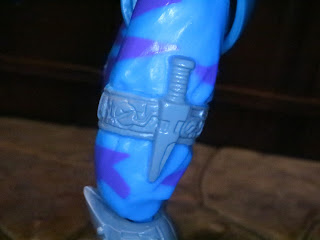 * Since the He-Man line used all new sculpts for figures (something MOTU didn't start doing consistently until later in the line) the figures often have some cool little details sculpted on. Nocturna has a knife sculpted on his left hip which looks pretty cool. Man, I really wish we had gotten a MOTUC Nocturna with this knife as a removable piece! That would have been boss. 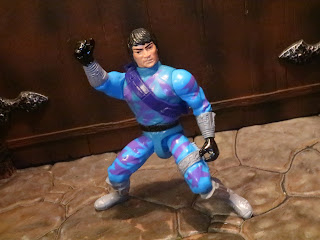 * Nocturna has the standard articulation for this line which is decent. They're fairly durable figures with swivel shoulders, swivel heads, and swivel/hinged knees. He does have an action feature but overall it doesn't inhibit his movement too much like many of the other figures with action features. 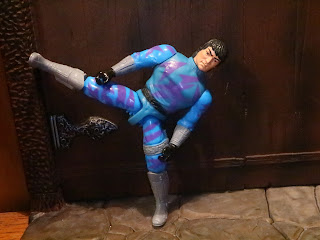 * Nocturna has an interesting action feature: He can perform a side kick with both his left and right leg! His legs have an interesting mechanism of gears that allow you to tip the figure to the side on either leg, causing the other leg to fly up! Mattel must have been proud of this feature as Nocturna's body and action feature was reused for the Demolition Man toyline as the body for "Kick-Fighting Spartan!" There are actually a few Demolition Man toys based on New Adventures figures. 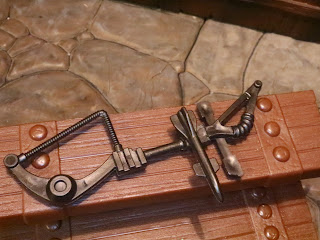 * Nocturna's main weapon is a bow of sorts. It looks like it has a missile attached, so maybe it's a bow that launches missiles or rockets of sorts? It's pretty cool looking and does kind of fit in with the "covert" aesthetic that Nocturna has going on. It's also nice that Nocturna can hold his bow in either hand. 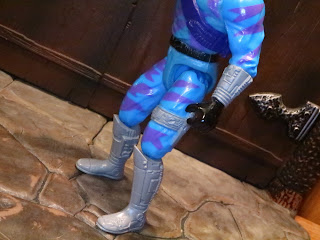 
* While the action feature is really cool, it does leave Nocturna with legs that are joined together. If you move one leg forward then you will have to move the other leg forward, too. It's not the biggest issue ever but I thought it was worth mentioning. 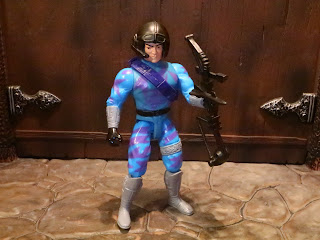 I'm already in the minority as someone who likes the toys and general concept of The New Adventures of He-Man so I'm definitely not ashamed to give some strong opinions on this line. That being said I really like Nocturna. Seriously, he's a really cool figure that is just so different from nearly every other MOTU toy out there. I dig his tactical look, his camouflage pattern, and his cool action feature. He's honestly one of my favorite Galactic Guardians. I never owned Nocturna as a kid but I was glad to get him in my collection a few years back as he really stands out in the line. Whether you take him as a rather unusual concept for a MOTU toy or as a carryover of ideas from the never used He-Man military concept line, Nocturna is a pretty cool hero who gets stuff done.

This is the first Nocturna review on the site. This is also the only Nocturna figure ever released, so there's that, too. For more reviews from Mattel's 1989 He-Man line check out the following:
Artilla/ Weaponstronic
Butthead
Doomcopter/ Skullcopter
He-Man
Karatti
Power Sword
Quakke
Sagitar/ Tharkus
Staghorn
Terroclaw/ Terrapod
Posted by Barbecue17 at 6/11/2020