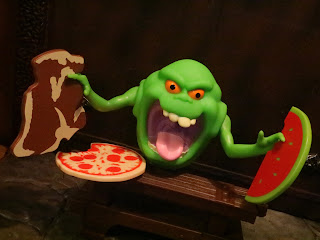 I recently stumbled upon a couple more of Hasbro's Ghostbusters Kenner Classics, the 2020 toys which are near exact recreations of Kenner's 1986 The Real Ghostbusters toyline. I had all of these as a child so seeing these in stores was a real treat! That oversized purple backer card just stands out from everything else on the shelves, doesn't it? I believe there are currently two cases shipping in this series: One with the four Ghostbusters and another with both the Green Ghost and the Stay-Puft Marshmallow Man. Today I'm checking out the Green Ghost, who we all know is Slimer. Kenner used this name on their Slimer figures and even rereleased the original figure with a label pointing out that the character was known as Slimer on The Real Ghostbusters cartoon. The original Ghostbsuters toys were very popular and there are probably untold numbers of these figures floating around out there. Still, it's nice to get a new and complete one at a decent price. Hasbro did a great job recreating these figures, so doing reviews of these figures is a bit odd as most of the positives and negatives I'm pointing out are aspects of the original figure. That said, I have to admit that this was never my favorite Slimer toy as a kid. My favorite was actually the Topps Slime candy container released around the time of Ghostbusters II. Still, I had this guy as a kid and I have him again now, so let's take a look at the Green Ghost after the break... 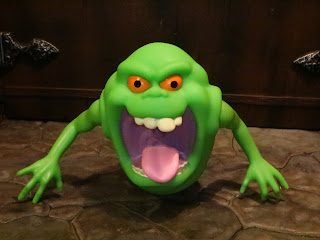 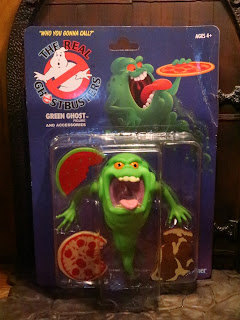 
* Here's a quick shot of the packaging. It looks pretty spot on to how I remember the vintage packaging looking and features the classic Kenner logo in the bottom right corner. I do want to point out that these cards seem to get damaged in transit, though, as I haven't seen any cards for either the Green Ghost or Mr. Stay-Puft that haven't had some severe damage to the backer card. The top corners seem to be especially prone to bends and creases. 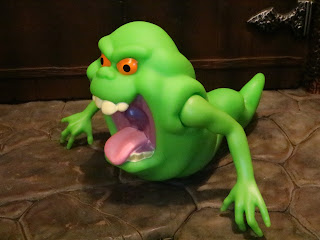 * Slimer is a very iconic toy and Kenner did a really nice job of capturing a mixture of the movie design and the cartoon design of the character. He's rotocast, meaning he's hollow, and his shape, colors, and design really capture the ghost's larger than (after)life persona. He also does have a body that looks kind of like a potato, so Ray was right: He's an ugly little spud. 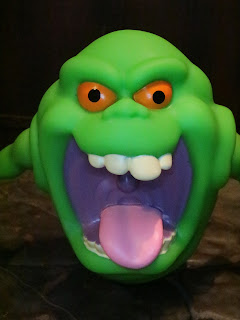 * The face on Slimer is excellent. I'm not the biggest fan of this toy (which I'll get to in a minute) but I do love the expression. If you wanted this version of Slimer to be a villain that the Ghostbusters have to hunt down then that's totally believable by this expression. Of course, you could also have this as the lovable nuisance from the cartoons as well. The portrait is extremely expressive and really seems to capture two different looks for the Green Ghost at once. The open mouth is also a really fun feature as it makes him seem very wild and dynamic! 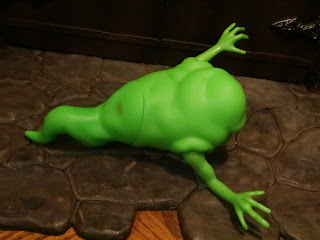 * Slimer only has three points of articulation but I do love his articulated "tail" as it does give you a couple decent options for posing him while playing with him. He's a solid and durable toy, too, so there's no fear of breakage here. 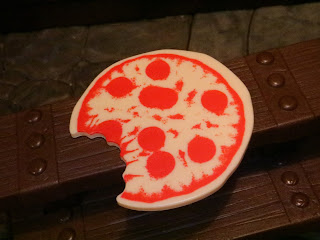 * Since Slimer loves to eat he includes three rubbery food items that he can hold between his fingers or that you can fold up and stuff in his mouth. First up is this cool pizza. Before the Teenage Mutant Ninja Turtles, getting pizza as an action figure accessory was rare. Slimer's pizza is clearly New York style with lots of pepperoni and cheese. Oh, and a bite missing! 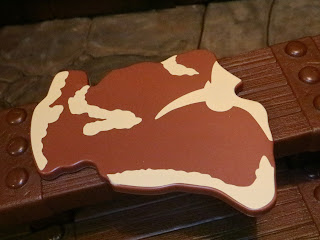 * Next up is a rubbery steak. It's kind of like a really small dog toy for a really small dog. Of course, for an action figure this is like a big, Fred Flintstone sized steak. I've actually seen folks get into knife fights over whether this is a steak or a pork chop, but I'm firmly in the steak camp (and Hasbro's copy for the toy call this a steak as well). I think that's a bite mark on the left.

Gosh, that looks pretty good, doesn't it? It's all nice and marbled! 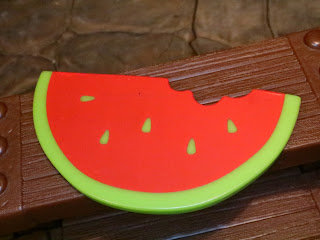 * Last up is a slice of watermelon. How refreshing! I have a Mexican restaurant near me that serves amazing watermelon agua fresca (it seems like it's usually on Mondays) and just looking at this accessory gets me excited for Monday, so that's a good thing. Delicious! 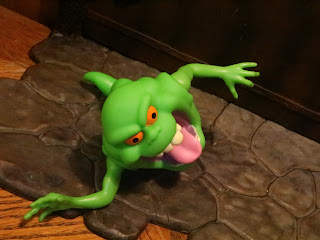 * Slimer is a really hard figure to play with unless you're just floating him around. If you have his tail posed a certain way and you put his arms down you can kind of balance him, but that's not super convenient or fun. He really is just going to roll around on display unless you get really creative. 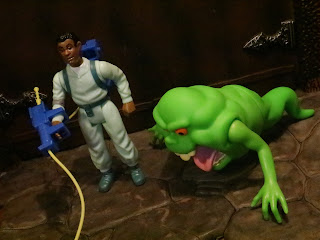 * I've never liked how large Kenner's Slimer was! He seems way too large for the line! I'm usually OK with certain things being scaled up a bit or scaled down a bit (Stay-Puft makes sense to me as he would have been unrealistic for the line had he been larger) but Slimer would have clearly been doable in a smaller scale. 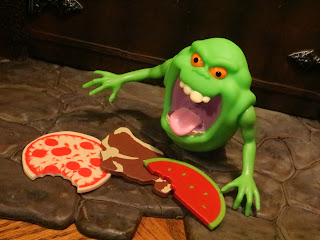 Hasbro did an excellent job remaking Slimer and any weakness really is attributable to Kenner as I always found the original toy flawed, even as a child. I do like it but it's definitely the weakest first series figure. It's actually one of the weakest The Real Ghostbuters releases of the line. He's still an iconic toy and the rubbery food accessories are quite charming, so I'm giving Slimer/ the Green Ghost a Good and a 1/2 rating. There's fun to be had but most of it is derived from the nostalgia since so many if us had this guy as a kid.


This is the first toy of Slimer/ the Green Ghost that I've reviewed on the site. For more reviews from the Ghostbusters Kenner Classics line check out the following:
Winston Zeddemore and Chomper Ghost