Action Figure Review: Mosquitor #996 from POP! Television: Masters of the Universe by Funko 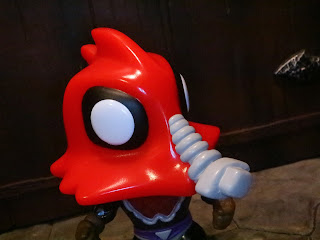 It's always exciting when a toyline based on an existing property starts moving beyond the A-list characters and starts delivering up the more obscure fan favorites and that's why I'm pretty excited for the newest series of Masters of the Universe POP! vinyls from Funko: It has a great assortment of B and C list characters! Yeah, the newest series has a He-Man redo, the Sorceress, Prince Adam, and an oversized Skeletor, but it also has a more obscure character from each of the four main factions. There's Sy-Klone for the Heroic Warriors, Tung Lashor from the Snake Men, Webstor for the Evil Warriors, and Mosquitor for the Evil Horde! Since I'm on the younger side of MOTU fandom (I wasn't born until '83) I actually had a lot of the figures released later in the line as a kid, like Mosquitor. I'm not quite sure where and when I got my Mosquitor but I still have him and he still works. Mosquitor is a pretty fearsome villain and a popular figure. I'm really glad to see Funko put him into the POP! line since he doesn't get the exposure that so many other characters do. Let's take a look at Mosquitor after the break... 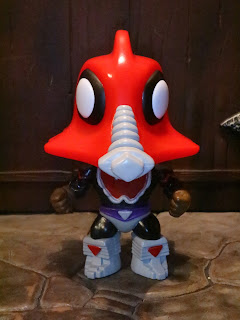 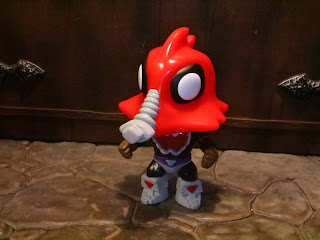 
* Mosquitor's pose kind of reminds me of the classic POP! pose although his body is less chunky and far more detailed. He stands securely and has a swivel head, just like the rest of the MOTU POP! vinyls. He's also rocking his wicked cool Mosquitor boots. I don't know why he doesn't have his purple laser gun, though. Funko kind of goes back and forth on who gets their weapons in this line. 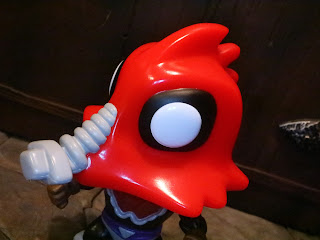 * Mosquitor has a very unique headsculpt for a POP! since Mosquitor has a head that wouldn't translate into the standard POP! design. It really feels like Funko took the standard Mosquitor head (or maybe it's a helmet?) and softened it up a bit. The nose/ mouth is less pointy, the edges are smoother, and the eyes are just blank white. it works, though, and it's quite colorful. Mosquitor really stands out on the shelf. 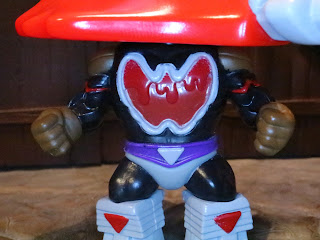 * Mosquitor's classic action feature was a clear chest that showed red liquid "blood" inside. When you pushed a button the "blood" bubbled around, making it look like Mosquitor was actively sucking some victim's blood. It's a great action feature and while Funko didn't actually include it here they did sculpt the chest to look like blood is running into the reservoir there. And yes, I believe the minicomics and such labeled Mosquitor as sucking out his victims' energy, but c'mon, he's a mosquito-vampire hybrid: That's blood! 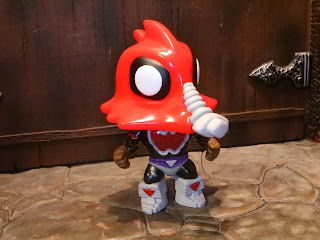 I'm really liking that Funko seems to be including a nice mixture of the more obscure characters along with the more well know characters, too. Mosquitor definitely qualifies as one of the lesser known MOTU characters and his presence in the line is quite welcome. He's a nicely sculpted figure although I do wonder why Funko didn't give him his gun accessory. Despite the MOTU POP! vinyls appearing the POP! Television subset, Mosquitor never appeared in the Filmation cartoon. This is clearly based on the vintage toy, so why no laser gun? Mosquitor is a Good and a 1/2 POP! vinyl that goes outside the box a bit to tackle Mosqutor's unique head, which works quite nicely.


It turns out that this is the first Mosquitor figure I've reviewed on the site. For more POP! Television figures from Funko check out the following: