Action Figure Review: Shokoti from Masters of the Universe Classics by Mattel 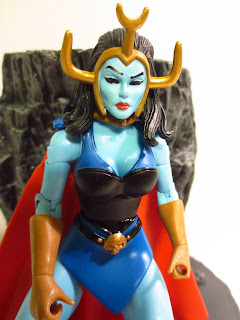 I love Masters of the Universe. A lot.  I'm not the biggest Filmation fan in the world, however.  Actually, let me clarify: I love Filmation's She-Ra: Princess of Power, but I'm just not as big of a fan of Filmation's He-Man and the Masters of the Universe. Don't get me wrong, I do like to watch it.  If I'm sitting around and want something quick and fun, I'll put it on. I love the show. It's just not as definitively MOTU to me as it is to some fans.  That being said, there are some really good episodes in He-Man and the Masters of the Universe, and one of the best that always gets brought up is the season one two-parter "House of Shokoti."  It's a pretty good episode that is legitimately scary and menacing while also featuring a discernible plot.  While there weren't a ton of Filmation He-Man and the Masters of the Universe characters I was dying to get in Classics, one I definitely wanted was Shokoti, the evil titular star of the episodes named above.  Rather than give you a standard review of a character you may not be familiar with, I opted to do a FAQ (Frequently Asked Questions). All the same info as usual, but in an easier to read format.  The FAQ starts after the break.... 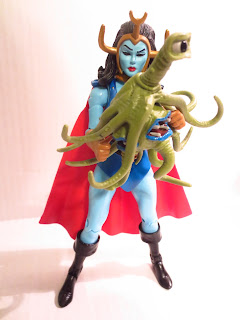 OK, so who exactly is Shokoti?

I'll let Mattel's own bio handle this one:
"Possessing incredible powers fueled by darkness, Shokoti™ was the most dangerous sorceress on the Dark Hemisphere of Eternia®. Fearing her plan to cover the entire planet in darkness, Shokoti’s fellow blue-skinned Gars lured the nefarious witch into the sunlight and buried her with her beast companion in the House of Darkness. Many years later, the shapeshifting wizard Masque raised the temple from the Sands of Time and opened the door to darkness once more until He-Man® heroically defeated Shokoti™ and the Sleeping Beast forever. Shokoti™ uses the darkness and magic to cast illusions and project energy blasts from her hands."

Has she appeared in any other media besides the two Filmation episodes you mentioned above or the Classics bio?

Nope. Actually, she really doesn't even appear in the first episode of the two parter--only in images of her all around her pyramid.  Still, her appearance is quite memorable and has left an impression on so many fans that Mattel decided to put her in the line. Then again, Mattel also put Nepthu in the line.

How do you say her name anyway?

This is actually a running gag in the "The House of Shokoti" as Ram-Man can't get her name correct.  He calls her Shaboopi, Sashimi, and Shabooti.  He might even call her Mushroomi.  In the episode the name is correctly pronounced Shuh-KO-Tee. 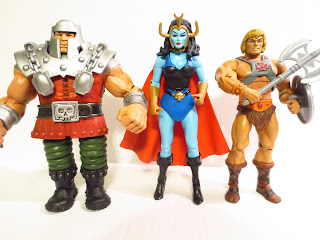 OK, give me some vital statistics about the figure: A/S/L- you know, that stuff!

A/S/L? What is this, 1995?  I don't have a clue how old she is, she's obviously female, and she's from the dark hemisphere of Eternia.  She also stands right around 7 inches tall; perfectly in scale with the rest of your Masters of the Universe Classics figures. 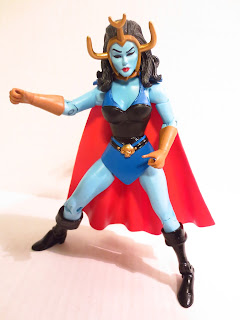 While the male characters have had pretty standard articulation, the females have varied more from figure to figure.  Shokoti has full lateral ankle hinges and vertical ankle hinges, boot swivels, hinged knees, thigh swivels, ball jointed hips, a swivel waist, ball jointed shoulders, swivel biceps, hinged elbows, swivel wrists, and a ball jointed head.  Some collectors have complained that they've had figures with loose ankles, but my Shokoti has very tight ankles.  I really like that she has the full lateral hinged ankles that come from Adora as they offer a great range of motion.  Her head movement is restricted by her long, thick hair, so keep that in mind.  My figure also has her right boot swivel completely stuck.  She might be due for a trip to the freezer or a dip in boiling water to see if we can't do something about that.


Does she feature any reused parts?

Of course.  This is MOTUC after all.  I mentioned above that Shokoti has Adora's feet and boots, but she also has Octavia's gloves along with the new standard female thighs, torso, and upper arms. 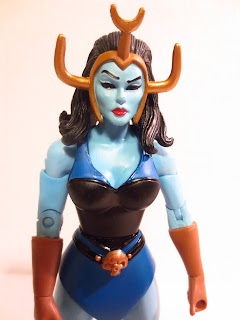 Well, the reused parts definitely look like the character model from the cartoon, so I'd say those are a success.  The newly sculpted parts are her skirt, top, cape, and head.  There's nothing particularly wrong with these parts, but the figure really seems to emulate the simple look of the Filmation villain to the detriment of being an exciting figure in three dimensions.  It's always been difficult to nail down just what exactly the "Classics style" is, but Shokoti seems to be too simple in design compared to other figures.  While Mattel and the Four Horsemen did a great job of translating Icer, Shadow Weaver, and Fang Man into the line by adding extra details, textures, or shading, Shokoti sits more firmly in the Eternos Palace Randor camp as ultimately feeling a bit flat.  Granted, there are still some very cool elements to the character as an evil blue witch is a difficult concept to make boring. 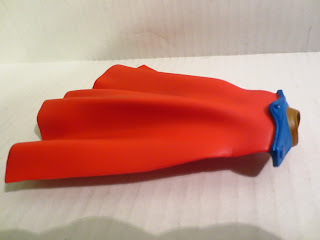 The cape, while being plain, seems like it could be a versatile accessory for folks who like to customize. The armored top of it looks kind of cool, as it sort of reminds me of epaulets.  It's her top and her skirt that I just feel are very empty. You're telling me that the Four Horsemen couldn't have figured out more cool details for this chica?  You know that if she were airbrushed onto the side of a van, she'd be covered with copious amounts of cool stuff.  Check out this concept art that was done by super fan Emiliano Santalucia to get a better idea of what I was hoping for.  Her face, headdress, and hair look impressive and aren't as flat and lifeless as the body. Well, her pupil-less eyes are lifeless, but in a creepy sort of way that's part of the character's allure.  She is missing her fangs, however, which is kind of weird. I also think her face could stand to be a bit more angular.  Take a look at this picture here--don't you think Shokoti could stand to look a bit more demonic and evil? I sure do. 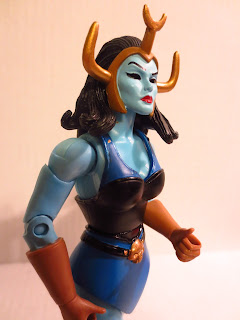 Umm, it just sits on the figure and makes her colorful.


No, no. What's the quality of her paint applications like?

Oh, sorry. Well when I look at her, the first thing that comes to mind is Big Barda from DC Universe Classics.  It's gotta be the blue, the headdress, and the red cape.  For the most part all of her paint work is well applied and neat.  The body and head are molded in the blue of Shokoti's flesh so there's no paint tub issues on the joints. The only paint problem I have is that there is some red splatter on the back of Shokoti's hair.  It's not very noticeable, but it's still there and I know it. Of course, now you know it too. 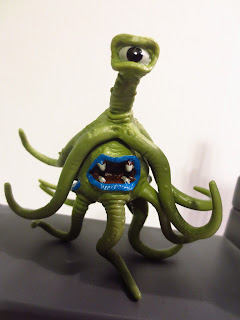 What's the little green guy that comes with her?

It's a Darkling; one of the weird little creatures that Shokoti commands against He-Man and Ram-Man in "House of Shokoti." It really was a swell idea for a pack-in with the character, and it looks great. We really need more little guys like this in the line, so it's always a pleasure to get one.  The Darkling is an ugly, tentacled thing with 12 tentacles, an angry eye on an eye-stalk, and three mouths.  It's made of a solid rubbery plastic and stands pretty solidly on it's lower tentacles. Including a stand or at least a peg so that a stand could fit the creature and give the illusion of floating would have been desirable, but it didn't happen here. Actually, I think it would have been cool if Mattel had given the Darkling a hole for a neck peg so that the creature could both be attached to a stand or be used as an alternate head for a character.
How was she made available?

Shokoti was the second figure available in the Club Filmation subscription offered through Mattycollector.com.  She was released in August of 2013 and was sold on the Mattycollector website for non-subscribers for a day or two. 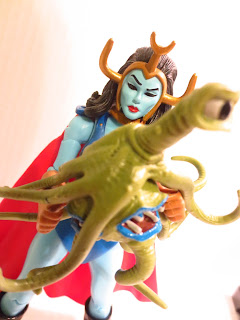 Can I still buy her?

At this point, she is listed as being sold out on Mattycollector.com but you can still snag her on some other websites such as Big Bad Toy Store. She's ready and available there right now.

BTW, who is Masque? I keep hearing about this guy.

Masque is an evil follower of Shokoti who attempts to keep the heroes from interfering in Shokoti's plans.  He also appeared in "House of Shokoti" and seems like a natural companion for Shokoti. At SDCC 2013 Mattel had a vote to let fans decide who would be made in the 2014 line: Huntara or Masque.  Masque ended up losing to Huntara, but many fans hope that at some point we'll see Shokoti's devoted whipping boy in MOTUC.

Back in your review of Cortana you gave a list of your five favorite blue women- would Shokoti make this list? 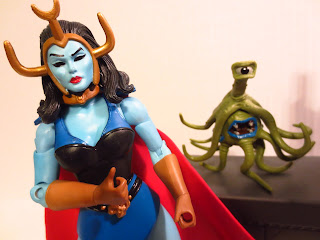 Humor us--give the figure a rating.

Let's see--I've got to say that I'm really glad to have a Shokti in the line, both because she's a cool character and because she's a villain independent of any of the main baddies.  She's got a unique look to her, but the style is just too plain and barren of the neat little details that make MOTUC so fun.  I love her Darkling, but she really could have used an extra accessory--if not a new stave of some kind, a simple repaint of Evil Lyn's staff would have done nicely.  Paint's good, articulation is decent except for my QC issue with her right boot swivel, and the head swaps easily.  I'll go with a Good rating. I'm happy to have Shokoti, but I feel that Mattel and the Four Horsemen could have done a bit more to spice up her Filmation design and make her a competitive action figure for the year 2013.
Posted by Barbecue17 at 11/22/2014