I hope you're liking the little theme I got going on with giving you a couple Trash Bag Bunch figure reviews on the weekends. I'm not sure that will continue but I'll see what I can do. Today I'm looking at Trashblaster who is absolutely a figure I owned as a child. He's another toy from my collection that I've had since 1991, so I've now owned him for around 25 years. Crazy, right? Let's take a look at this awesome heroic robot today... 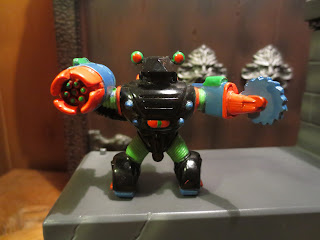 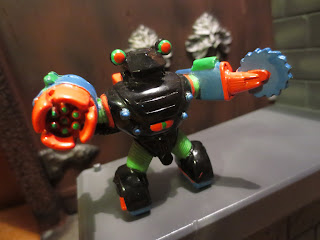 * The thing I love about Trashblaster is that he's packing two very serious weapons. I've always assumed that Trashblasters were a sort of generic heavy infantry unit used by the Disposers and thus they have a small army of these guys. I'm not sure what I like more: The giant saw blade or the massive cannon with green missiles. It reminds me of the cannon that sat in front of the 1992 G.I. Joe Headquarters, although this guy did come out first. Imagine if this were a full size figure and you could crank a knob on the back and launch some green death from Trashblaster's cannon! 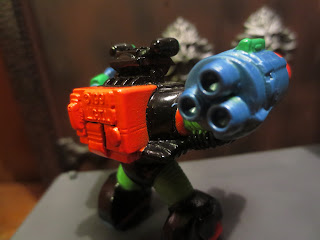 * I really like the color scheme on Trashblaster. The orange, green, and metallic blue just looks really nice against the black body. If you turn him around you can see an energy pack of sorts on his back. It seems to link to the massive cannon on his right arm. It's possible this thing also pumps energy rounds into that mega cannon. 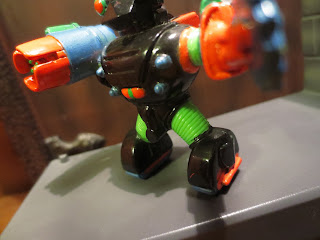 * I love the treads on the bottom of his feet and the flexible green legs that Trashblaster has. I imagine that these guys can't climb much, and probably stumble over rough terrain, but they're probably beast enough with their weaponry to make up for it. Also, doesn't it look like he has a dong? That's weird, huh? Maybe's it's just the barrel to an anti-personnel shotgun or something to help Trashblaster out when the bad guys get too close. 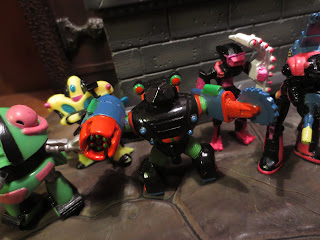 This guy is awesome and has always been one of my favorites. He's kind of mech-like in his design but he also has a lot of personality thanks to those red and green eyes on top of his head. I now have two of these guys (I picked one up in a recent lot to score two other figures I needed) and I think they make really little army builders. Trashblaster is definitely an Epic minifigure and quite possibly my favorite figure from the heroic Disposers. He seems to be one of the easier ones to find so have at him, folks!


My goal is to review every series one Trash Bag Bunch figure on this site! I've currently reviewed these figures so far: