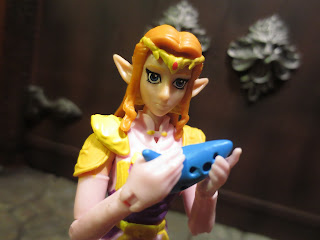 It's been over a month since I found Red Toad and Cat Mario from series 2-2 of Jakks Pacific's World of Nintendo line but I've finally found the third figure in the series: Princess Zelda! Based on her appearance in The Legend of Zelda: The Ocarina of Time, Zelda adds another character to the growing roster of action figures Jakks has released from that game. While these aren't the most impressive action figures on the market I find that this is one of the action figure lines I look forward to the most. They're colorful, fun, and feature so many characters who have never had action figures made of them before! While I do own a Princess Zelda action figure from 1998, it's still amazing to see a new Zelda figure on toy shelves today. Let's take a closer look at one of the heroes of Hyrule after the break... 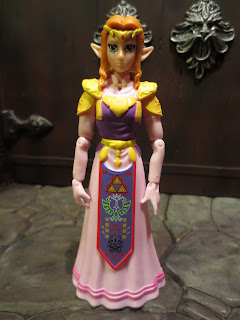 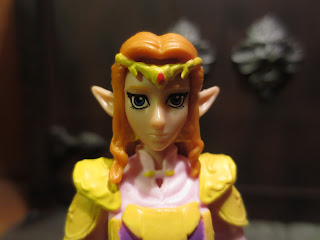 * This is a gorgeous representation of Princess Zelda. The sculpt and the paint come together beautifully. She looks a bit concerned, understandably so as the weight of the fate of Hyrule is surely on her shoulders, and the excellent paint on her eyes captures this expression beautifully. This is one of the nicest looking figures I've seen from Jakks. 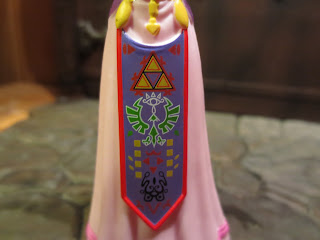 * Zelda has a beautiful apron (I'm not sure what it's really called) hanging down from the front of her dress that is covered with various Hylian symbols such as the Triforce. The paintwork on this stamp is just gorgeous. It's so colorful and well designed! 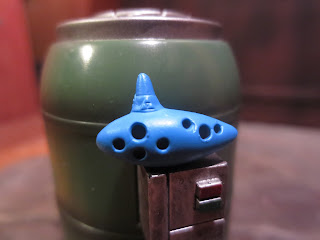 * I'm absolutely thrilled that Princess Zelda comes with the Ocarina of Time itself. What a cool accessory! It's very nicely sculpted and features black paint applications inside the seven finger holes to give the allusion that this is actually a hollow instrument. There's even a little Triforce by the mouthpiece. 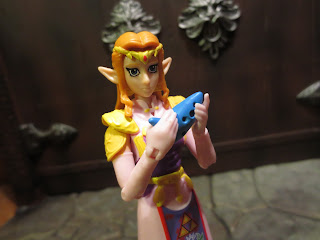 * When we first began seeing pictures of this Zelda figure it was immediately recognizable that her arms looked really awkward. It turns out that they're really well articulated and designed so that she can hold the Ocarina in a fairly convincing pose. She's not quite "playing" it, but she looks ready to play. I like the range of motion in her arms and how expressive it makes her seem. 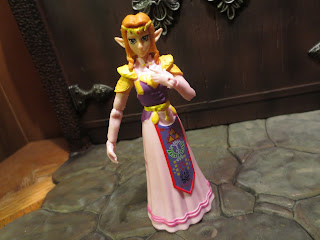 *As demonstrated above, Zelda's arms are really well articulated and definitely help the figure to look awesome in a number of poses. From the waist down, though, Princess Zelda is what I've always heard referred to as a "salt shaker": An action figure wearing a robe or dress that's simply made of a solid piece of hollow plastic. Zelda doesn't have any sculpted legs or articulation. Don't bother saying "Excuse me, princess!" She couldn't move out of the way if she needed to. 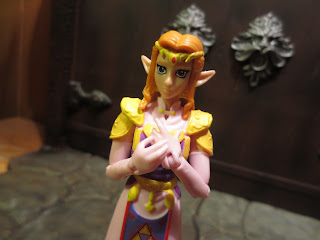 While I do not yet have Skull Kid and Slippy Toad, I really think Princess Zelda might be my favorite figure in this series. While her lower leg articulation is nonexistent, she really is a very lovely action figure that captures the Princess' beauty and strength. The inclusion of the Ocarina is incredible, too. What a cool (and long overdue!) accessory. Zelda might not be the most exciting figure in this series but she's still really well done. She's a Great figure and well worth picking up if you're a fan of the Legend of Zelda.


I have actually reviewed two other figures of Princess Zelda before: The Princess Zelda offered as part of a preorder bonus set for The Legend of Zelda: The Ocarina of Time in 1998 and Sheik from World of Nintendo, who is Zelda in disguise. I've reviewed plenty of other action figures from this line, including: