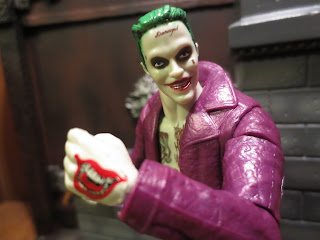 Yesterday I reviewed Captain Boomerang and today I'm looking at another figure from Mattel's DC Comics Multiverse: Suicide Squad line: The Joker! I really liked Jared Leto's portrayal of the Joker in Suicide Squad and I've been waiting for an action figure that does the character justice. I reviewed the Toys R Us exclusive Joker near the end of July and now, around two months later, I'm finally getting around to reviewing the regular release. This is an outfit that the Joker wears in the film although I don't think it's his most memorable look. Still, any Joker look is pretty interesting, right? Let's take a closer look at the Joker after the break... 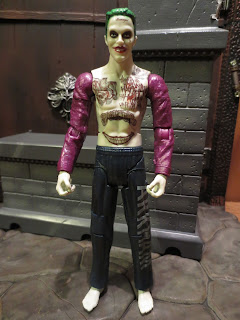 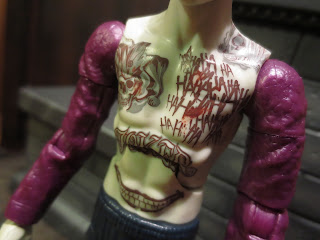 * The Joker's tattoos look really good. I was checking these out compared to some images from the making of Suicide Squad book and I think Mattel nailed them. They're great and I only regret that Mattel didn't give us a pure shirtless Joker. 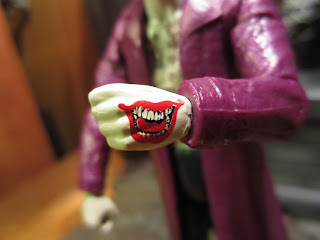 * Check out that crazy hand tattoo! I love it. While the Joker lacks the ability to truly hold it up this his mouth (he needs some double jointed elbows for that) the paint work on this tattoo is really quite impressive. 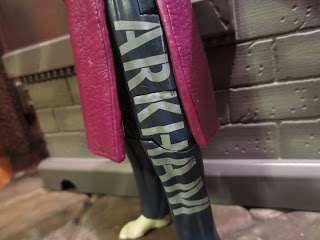 * The Joker is wearing some Arkham Asylum branded pants that he escaped from jail with in this outfit and, being a huge Batman fan, I just can't help but love this detail. The print is clean and these really do look like something from an institutional setting. Neat detail. 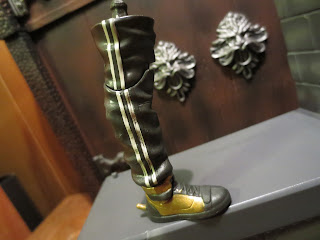 * While it drives me absolutely nuts that Mattel continues to split build-a-figures over two waves that ship at different times, I'm still excited about building Croc and adding him to the lineup. At this point the only figure I'm missing is Katana and thus I'm missing Croc's head and waist. 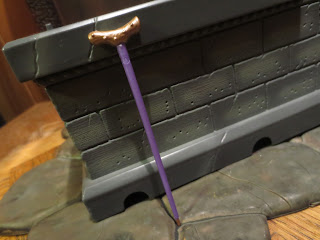 * The Joker comes with a cane. It's simple, but I'll take it. It looks good with him and works to help add some pizazz to any number of poses. 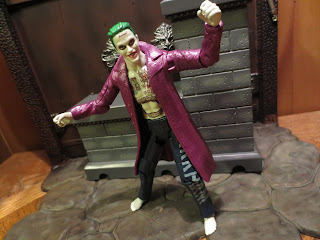 * After really getting invested in Hasbro's excellent Marvel Legends offerings I've become more disappointed with what Mattel's offering. Not only is the Joker less articulated than almost any Marvel Legends figure but some of his articulation just doesn't work. His ankles are useless as are his knees. The joints seem to tight and limited to even get a pose. Lame, Mattel. 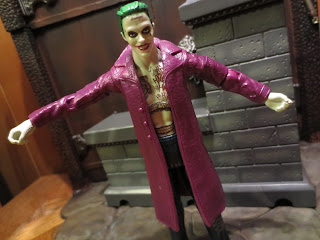 * Here's the thing with this figure: Opening it, I think I'd really rather have a shirtless Joker with all of his cool tattoos on display. Yeah, the jacket is removable, but only the chest part: The arms will still be covered by big purple sleeves. I really think Mattel should have considered something more like the removable jackets they've done on some of their wrestling figures. They ain't perfect but they're much better than a half removable jacket. 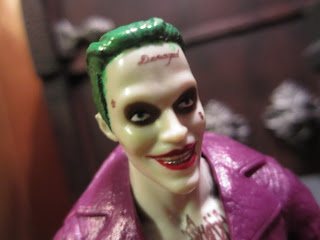 * This face just doesn't scream Jared Leto to me. It's just....odd. I could almost see the likeness in the Toys R Us exclusive figure but here? Nope. The paint work on the lips, teeth, and tattoos is good but the hairline is a mess. Ugghh... 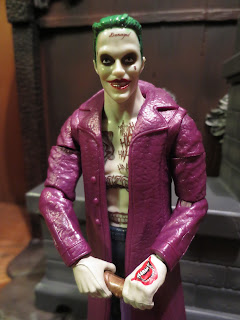 I have to say it: This guy is just  an Eh 1/2 figure. I mean, he's really, really just not that impressive. Considering that the Joker is such an iconic villain you'd really think that Mattel would have tried to put out at least one figure that knocked out socks off. Well, they didn't. I'm frustrated, too. While I still need to pick up Katana (she actually looks pretty good and I need to finish Croc), as I'm looking back at the Suicide Squad toys I'm definitely feeling like they're a very mixed bag. It's interesting to me that Mattel goes all out on 100% new sculpts sometimes but has articulation on the figures that just doesn't function properly. I mean, the Joker's knees and ankles really and truly just do not work. The joints are too close together and obstructed by the sculpt of the paints. Unless you're building Croc or are a hardcore Joker collector, this guy can be safely avoided.
I've reviewed tons of Joker figures, including: