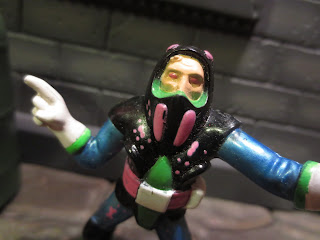 While I review plenty of toys from the recent lines I'm collecting, I also like to mix in a few figures from some of the older lines I'm currently interested in, too! Right now those seem to be Star Wars Micro Machines, M.U.S.C.L.E., and Trash Bag Bunch. I'm really trying to complete my set from this semi-obscure 1991 Galoob toyline and the subject of today's review, Prof. Garboff, gets me one figure closer to that goal. Right off the bat I'll totally admit that Prof. Garboff isn't the most exciting figure in the line. While I can appreciate his subdued pallette, neither his outfit nor his pose stands out from many of the other Disposers. Being that these characters have no backstories that I'm aware of, they're simply blank slates for whatever crazy ideas you can come up with. Me? I'm about to tell you why Prof. Garboff is the bad guy. Join me for what is quite possibly (hopefully, I guess?) the world's first Trash Bag Bunch fan fiction... 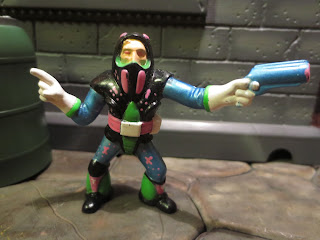 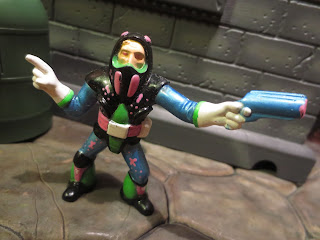 * Prof. Garboff kind of has an awkward pose. He's pointing his gun out to the side, as if he's shooting, but he's not looking where he's firing. Of course, since Prof. Garboff is an academic and not a trained soldier like Sgt. Wastenot or Kapt. Kollector, perhaps it's because he tends to fire randomly and doesn't have the proper fire discipline. Or, perhaps this pose captures him in a specific moment: The moment he swings his pistol out, places it against the head of a member of his own team, and turns their head into a fine red mist. Yes, it is true! Prof. Garboff is a bad guy! The bad guy, actually. 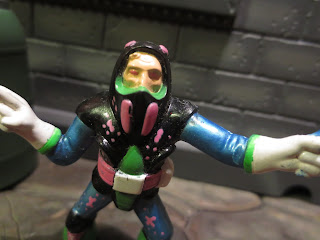 * Yes, it's true! Prof. Garboff is indeed the mysterious master of the Trashors! The Muck Master is just a pawn! Prof. Garboff is the real evil genius and he has been using the Trashors to help make the planet inhospitable to human life. Why's that? Because after years and years of tirelessly crusading for peace, human rights, and environmental causes, Prof. Garboff was crushed by the tragic murder of his wife and daughter by environmental activists. Look into those little red eyes: Those are the eyes of a man who doesn't believe that humanity should continue on living. 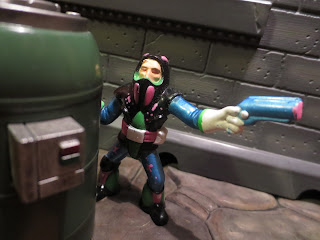 Seriously, one of the things I love best about many lines of little plastic figures is that so often there is no pre-existing story. You get to make one up yourself! I'm thinking that I might start working on some crazy stuff for Trash Bag Bunch for my own entertainment. While Prof. Garboff is only a Good and a 1/2 figure, he really has gotten the old creative juices flowing. I've got a few more reviews of these guys in the pipes so stay tuned for more trashy fun!

If you like what you saw here, check out more reviews of the Trash Bag Bunch by Galoob:
Bio-Degrador
Skuzbeast
Stink Buzzard
Trasher
Posted by Barbecue17 at 9/03/2016