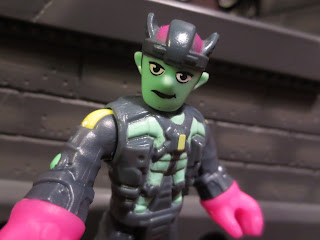 Thanks to someone over on the Imaginext Generation Facebook group I was able to secure a set of all 6 figures from Imaginext: Collectible Figures Series 7! While I've never seen hide nor hair of the Batman blind bagged Imaginext series, I have been able to collect every single figure from the standard series of figures thus far. Like Series 6, Series 7 only has six figures in it. It's odd that Fisher-Price has continued to decrease the number of figures in each series. Usually a blind bagged series is more appealing if someone knows they have slimmer odds of pulling a duplicate figure. Of course, Fisher-Price wisely (and subtly) numbers these figures so you really aren't buying them blind. That's really nice and something I wish other blind bagged lines would do. Today I'll be looking at the "Alien" from series 7. He's a pretty plain looking guy and, I'll go ahead and tell you, my least favorite figure from the series. Learn more after the break... 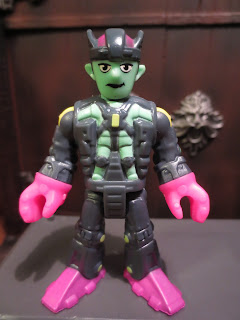 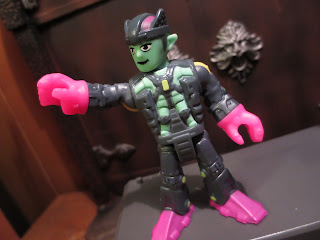 * Whether you're collecting these yourselves or buying these for the kids, you can appreciate that Imaginext figures are really well built. The articulation feels sturdy and you can have quite a bit of fun with these. My little one loves playing with these and so do I. They're just fun toys overall. 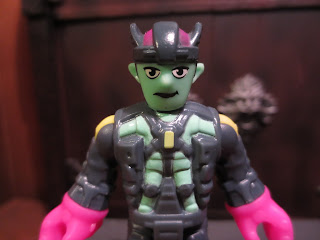 * I'm not overly wowed by this figure but he is definitely more interesting than some of the other Imaginext aliens we've seen. I think it's the face. The choice to make him green with somewhat unusual features helps him to stand out. Remember that episode of Space Cases where Bill Mumy and Mark Hamill played aliens? This guy reminds me of those two. 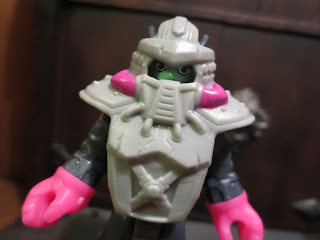 * To cover him up for battle or braving the dangers of outer space, the Alien comes with a space suit helmet that fits over his head and torso. The sculpt is pretty cool and there are actually some paint applications on it to tie it in with the pink and magenta highlights of the Alien's gloves and boots. It has a nice, secure fit on it and it really improves the look of the figure. 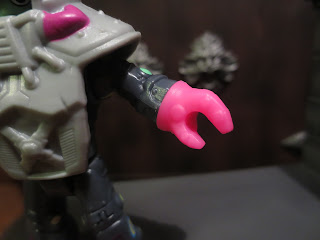 * Those pink gloves are really quite garish! That's not my real complaint, though; my real complaint is that the Alien only comes with his armor piece. That's a bit light on the accessories, isn't it? Most figures usually come with two little extras. A laser cannon, a staff, or even a probe of some kind would have been quite welcome. OK, maybe not a probe. 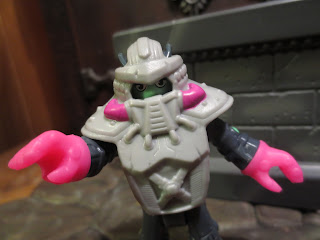 I appreciate the Alien's unique colors and interesting face, but he still just seems like a really dull figure. Maybe it's because I'm less interested in the space themed figures but this guy is, without a doubt, my least favorite in the series. Again, he's not a bad toy, just not one I'm particularly interested in. I think an extra accessory would have really went a long ways towards making the Alien stand out. He's a Good figure, but that's about it. I really wish he had been replaced with a female figure in this series, which has no females at all.


I've reviewed plenty of other figures from the Imaginext: Collectible Figures Series, including: