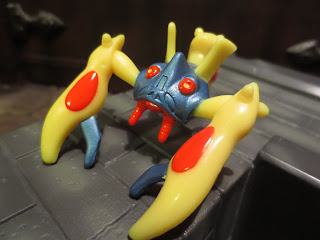 I really appreciate the great feedback I'm hearing from a number of you as I'm reviewing the Trash Bag Bunch! I'm going to try and keep doing more reviews of older toys on here but, since I'm currently trying to complete the Trash Bag Bunch, I'm going to keep offering these guys up. Klutch is a mechanical crab-like robot that fights alongside of the heroic Disposers and another figure in this line that I never owned as a kid. It's cool to have him finally as he's a rather unique looking figure and seems to be pretty popular with Trash Bag Bunch collectors (all 9 of us). Let's take a closer look at Klutch! 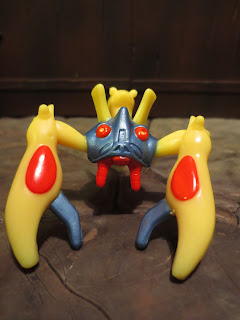 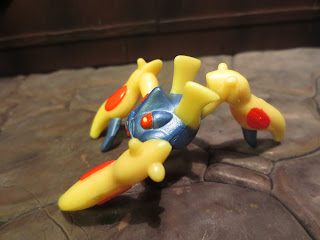 * The most unusual thing about Klutch is that he's a three legged figure who looks like a cross between a scorpion and a crab. He rests on his front two and rear legs and walks on three powerful pincers. I imagine that Klutch isn't much for fighting but serves more as a scout and a combat controller for the other robotic Disposers. While I tend to picture most of the Disposers robots as generic fighting units, I think Klutch was probably built as a unique robot with a specific personality. 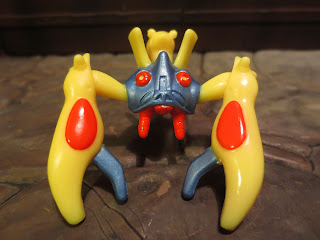 * I really like the front of the figure: Klutch's head/body really does look nicely armored and somewhat organic. His claws are also massive. I could see that Klutch, although not built for battle, could really be an effective fighter if push came to shove. Imagine how much pressure those pincers could apply? 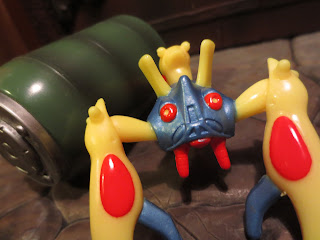 Klutch is pretty cool and definitely stands out from the other Disposers. He seems to be a more uncommon figure in this line, possibly because of his unique build. He's a Great Trash Bag Bunch figure, though, and he's well worth trying to pick up. He's very fun to play around with; he looks great fighting with other minifigures.

I've reviewed quite a few Trash Bag Bunch figures, including: