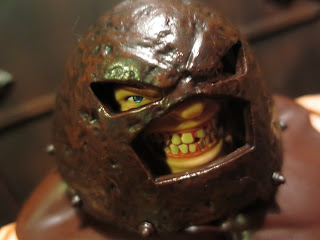 Back on August 31st I reviewed Kitty Pryde from Hasbro's recent X-Men subset of Marvel Legends, which includes the pieces needed to build an action figure of the Juggernaut. Today I'm finally reviewing the big guy himself, fully assembled and ready to ram his way into your collection. I'm definitely nostalgic for Toy Biz's 1991 X-Men line, Fox's cartoon, and the earliest Jim Lee era issues, so anything from those media usually get a automatic buy from me. Only once before have I ever built a Marvel Legends build-a-figure and that was Iron Monger from the Iron Man 3 tie-in series. While I was really introduced in most figures from this series due to being from the above mentioned X-Men era, the Juggernaut's presence sold me on the entire series. He was just a character I had to own in the Marvel Legends format. Now that I've picked up all seven figures needed to build him (Deadpool doesn't come with a BAF piece) I can review this guy, so let's get to it after the break... 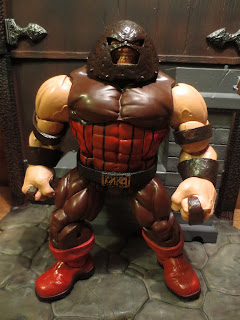 Non-Scalper Price: To build him you need to buy 7 figures at an MSRP of $20 each, so around $140. Of course, you also get seven other action figures: Cable, Havok, Kitty Pryde, Phoenix, Rogue, and Wolverine. 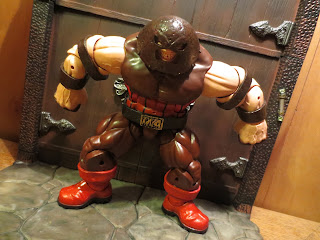 * While he doesn't have as many joints as most other current Marvel Legends figures, Juggernaut is a big, bulky, sturdy figure that's fun to pose. He goes together well and is a blast to pose in a variety of human bettering ram like poses. He doesn't have wheels in his feet like the old Toy Biz version but I still like him. 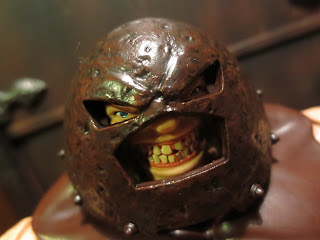 * This headsculpt is really impressive and captures the madness and rage of Cain Marko well. Look at those teeth and those eyes! That's pure insanity and I love it. I'm also digging the look of the helmet as it has a great texture that really evokes a shaped metal dome with rivets on the sides. The head and the helmet are separate pieces, although the helmet is not removable. 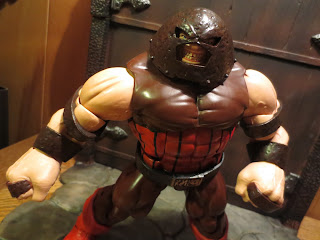 * This guy is a bruiser. At around 8 1/2 inches tall, and 5 1/2 inches wide, Juggernaut is a pretty beastly figure. He's certainly not the largest build-a-figure but he does make for an intimidating looking toy without making him monstrously huge. I think the size looks about right and he has a nice amount of heft to him. 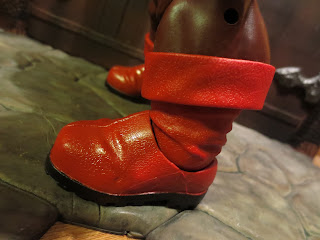 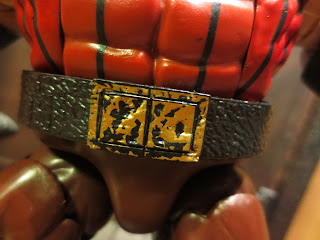 * Juggernaut has a belt around his waist that's a separate piece from the main torso. It's not removable, though. I like the look of it, even if I'm not 100% sure of what the deal with the belt buckle is. The leathery texture of the belt is nice, though, as it helps to add some differing textures to the figure's costume. 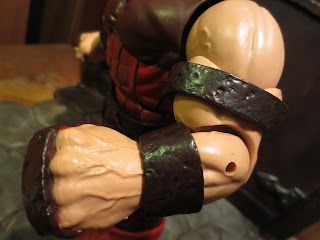 * Look at this guy's arms. He must work out. Seriously, Juggernaut has some massive arms and they look terrific. I love the iron bands wrapped around his wrists, biceps, and knuckles. They really add to his terrifying appearance. Can you imagine someone getting punched by this guy? 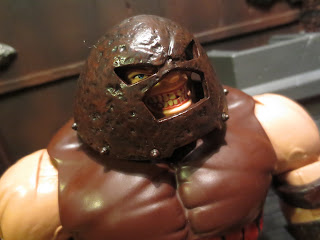 * Juggernaut, being a human battering ram, doesn't really warrant much in the way of accessories. There is one thing, though, that would have greatly improved this figure: A removable helmet. Cain Marko has a pretty recognizable appearance even without his helmet and it would have been cool had Hasbro made the helmet truly a removable piece, or included the second head with another figure. 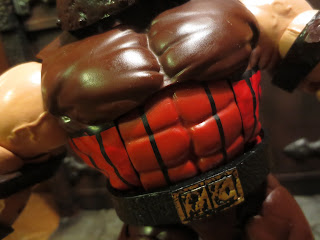 * I can't quite put my finger on it but there's something I'm not wild about in regards to Juggernaut's torso. I think it just doesn't look armored enough. Other Juggernaut figures have had a few panels of armor scattered about here and there but this version just looks like he's wearing a really tight spandex outfit. Like, really, really tight. 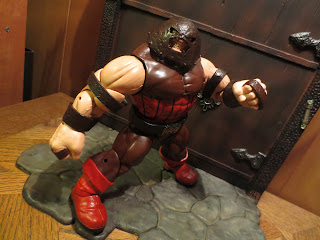 I'm pretty pleased with the Juggernaut and I'm glad I decided t build him. For some reason, I'm really feeling a tremendous sense of accomplishment that seems a but too much for simply putting 7 pieces of an action figure together. Hasbro did a nice job with this one and I feel like Juggernaut is definitely a character who can help to move some complete sets on his own. This is a solid figure and I'm giving him a Great rating. I do wish he had a removable helmet to give him a bit more substance, but overall this isn't a bad build-a-figure.

I haven't reviewed any other Juggernaut figures on Action Figure Barbecue but I have reviewed quite a few other Marvel Legends figures, including: