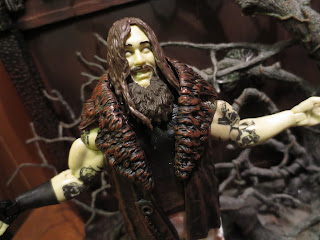 Whether you're a wrestling fan or a horror fan, I think it's worth taking a look at Mattel's latest WWE line: WWE Zombies. Yes. WWE Zombies. WWE Superstars recreated as zombies. It sounds really silly when you first hear about it. Believe me, I thought so too. It turns out, though, that these are insanely cool. Mattel took some popular WWE Superstars such as the Rock, Dean Ambrose, and John Cena and zombified them. They're not really done as comical zombies, though: These zombies look really, really good. How often have we had action figure lines filled with good zombies? I stumbled upon these a few weeks ago at my local Wal-Mart and had to pick up two of my favorites. My first choice was Bray Wyatt, one of my favorite WWE Superstars. He already has an incredibly cool horror themed gimmick so the zombie theme works perfectly for him. Let's take a closer look at the Eater of Worlds after the break... 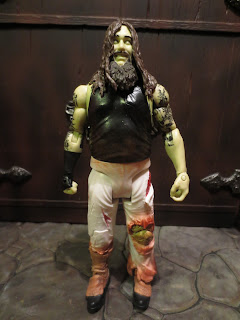 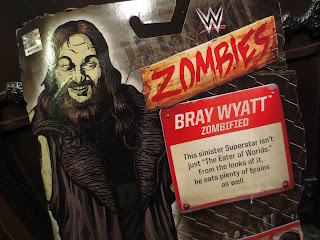 While we've had some solid packaging on mass market action figure releases lately, there really hasn't been much original art on toy packaging. Not only do these WWE Zombies have some cool original art but the blisters are individualized. 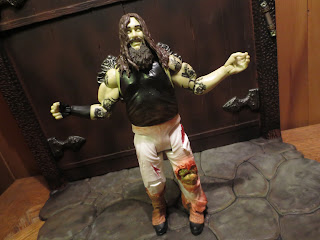 * WWE Zombies are essentially basic figures with some newly sculpted pieces added on to create the zombie effects. While the hips are simple swivel joints, the arms feature some pretty nice articulation. It's a nice compromise between the exceptional articulation of the Elite line and the need to be budget conscious. 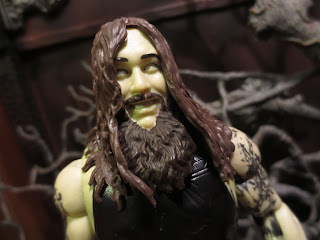 * While this isn't a new headsculpt for Bray Wyatt, it really works well for the character. It's already a pretty creepy headsculpt but now, with putrid green skin and milky white eyes, Bray is way more terrifying. I'm loving the look of this figure! 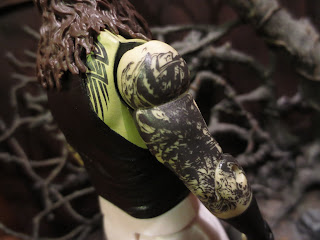 * Bray's tattoos are handled pretty well. There is a great amount of detail here, even on the bits of skin that are showing on his back from underneath his shirt. 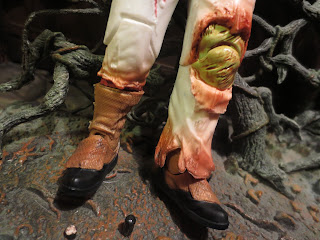 * As I mentioned above, each figure in this series is based on a standard figure with some new "zombified" pieces added on to create the undead appearance. Bray's pants have been ripped and shredded and you can see a good deal of bone and muscle peaking out from underneath. They're also covered in blood. This is some pretty gruesome detail for a figure sold as mass retail but I'm glad Mattel went with it. 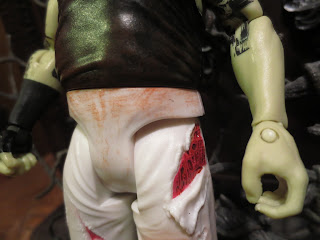 * Here's another shot of Bray's ripped pants and skin. You can also see the bloodstains and mud streaks on his pants and shirt. 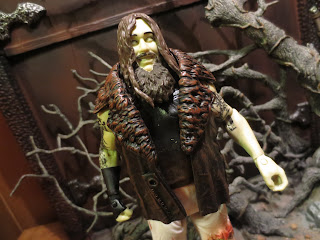 * One of the coolest things about this figure is that Bray has a really nice removable jacket. It has a great leathery paint job and actually looks like something he has worn from time to time. It's easy to remove and really adds a good deal of oomph to the figure. 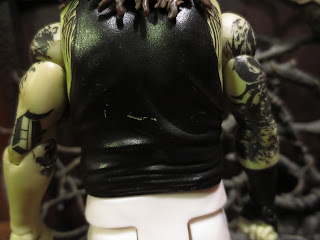 * There are some minor paint scratches on Bray's back. Of course these could easily be passed off as rips or tears in his shirt but the reality is that these are just some quality control issues. Not a big deal but I felt it was worth mentioning. 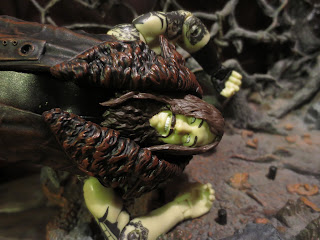 I'm absolutely loving WWE Zombies and I can confirm that at this point I have picked up five figures from the series, all of which I'll be reviewing on the site in the coming weeks. I'm so glad that Mattel managed to get these out right before the Halloween season and I hope they continue to do more with this line. Bray Wyatt is one of my favorites and he's easily a Great and a 1/2 figure. Whether you're a wrestling fan or a zombie fan, Bray just looks incredible and should spice up your display.


I have reviewed a few other Bray Wyatt action figures on here including the Basic Series #55 figure, the first Elite Bray Wyatt, and the series 38 Elite Bray Wyatt. I've also reviewed plenty of other WWE figures from Mattel, including: