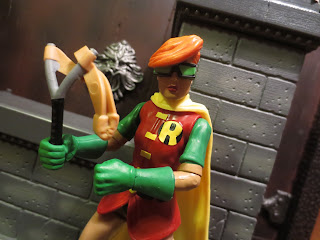 Just four or five years ago, did you ever think that you could walk into a mainstream retail store and pick up figures from Frank Miller's The Dark Knight Returns? While Mattel did release a DKR Batman in their Batman Unlimited line it's just been this year that the floodgates have opened. Wal-Mart had an exclusive three figure series earlier this year while the newest general Multiverse assortment features Armored Batman, the Mutant Leader, and, the subject of today's review, Robin. In DKR Carrie Kelly, a 13 year old female, takes on the mantle of Robin and joins Bruce in his crusade against crime. DC Direct released a figure of Carrie Kelly as Robin in their Dark Knight Returns back in the early 2000s so it's been well over a decade since she's been released in plastic form. Let's take a look at this newest figure of her after the break... 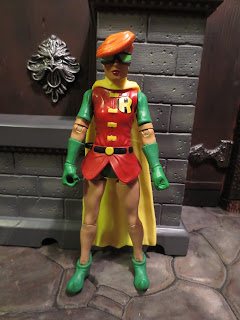 Accessories: Slingshot and the right leg for the Collect & Connect figure Doomsday. 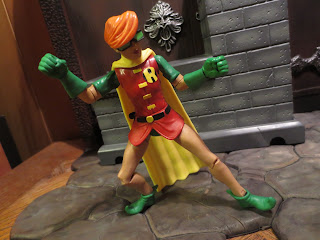 * Carrie Kelly doesn't have the best articulation but she is a solid, well built figure with a completely new body (so far as I can tell, anyways). She's also appropriately scaled, too, which is nice. Sometimes odd things happen with teenaged figures using adult bodies so I'm glad Mattel definitely put some time and effort into it. 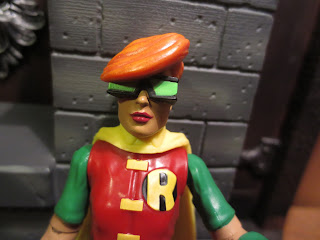 * I think Carrie Kelly has a great headsculpt: The Conan O' Brien hair is dead on, the size of the glasses looks right, and the shape of the face is near perfect. What I've come to realize is that I think Carrie Kelly is really odd looking. While she's supposed to be a 13 year old girl, she doesn't look like one. I know that the Dark Knight Returns has an oddly futuristic aesthetic, but Carrie Kelly has always looked more like a middle-aged female rather than a teenage female. Still, despite the oddity, Mattel did some nice work. 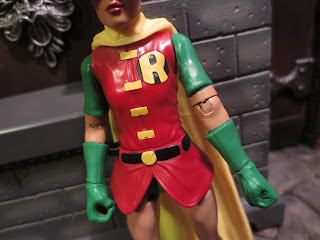 * Since she's a new sculpt, Robin's costume features plenty of sculpted details such as the clasps across the front of the chest, the Robin logo, and the belt. The colors look great and the paintwork is really quite nice. Carrie Kelly's Robin costume is so bright and vibrant and absolutely stands in stark contrast to Batman's darker appearance, particularly Miller's interpretation. 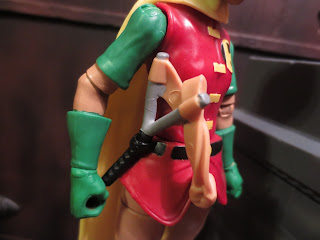 * Another cool feature is that Robin has a functional loop for her slingshot on her belt. At first I didn't think the slingshot would fit nor did I think it would look right but, pulling my copy of DKR off of the shelf, it actually looks proportionate, too. 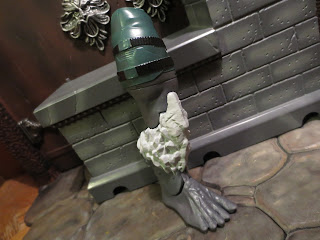 * I'll always give a figure credit for including a build-a-figure piece. I just like the concept and it helps to move more figures. I'm not planning on picking up Doomsday but it's cool to have him as an option for fans who want him. If anyone wants the piece, let me know! 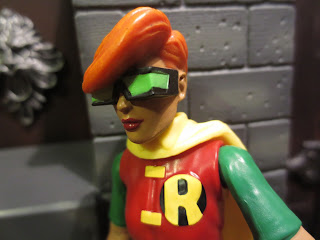 * I really wish that Carrie Kelly had translucent lenses on her glasses. Part of her characterization in the books is that while her glasses function as her mask you can still see her expressive eyes through them. This would have been beyond cool. 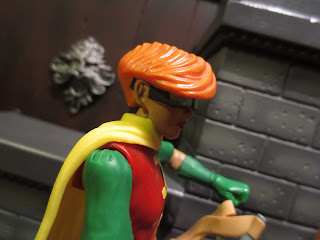 * I mentioned that Robin's articulation isn't too bad but I do dislike the fact that her head is effectively just a swivel joint. I'm not sure why Mattel isn't using a more simple, effective balljoint model to give a better range of motion. Ball jointed heads are just so crucial to good posing! 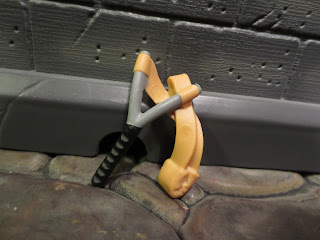 * Carrie's slingshot isn't at all bad. The paint work and sculpt is really quite nice. I'm wondering, though, why in the world did Mattel sculpt the elastic straps in such a dull way? I guess because it fits in the belt better but I would have loved to have seen the strips pulled back in a launching position. 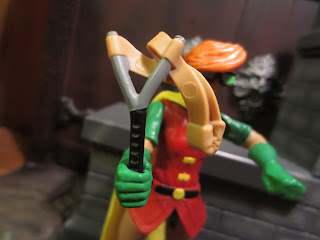 * Another weird thing involving Robin's slingshot: Her right hand is sculpted to hold the slingshot but it doesn't slip the whole way through. It sits too high and doesn't stay in all the way. Weird. 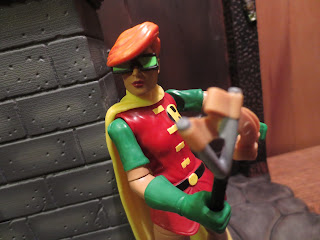 I feel like Robin is a nice figure that just has a number of small, odd problems that drop the  overall quality. She's very cool and looks nice but there are some functionality problems. In the end, I think she just gets a Good (which is my "average" rating). I think if the slingshot had been done better she would have rated much higher. I really like that Mattel is releasing so many unique sculpts in their Multiverse series; I just wish they'd focus on making the articulation more functional.


I haven't reviewed any other figures of Carrie Kelly as Robin nor of any other Robin. Weird, huh? I have reviewed some other Dark Knight Returns inspired figures, though: