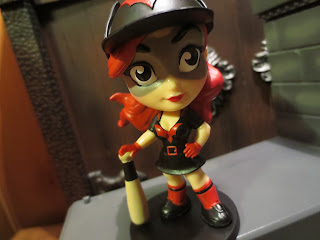 Today's my first review in Cryptozoic Entertainment's new DC Comics Lil Bombshells series of minature vinyl figures and I'm starting with Batwoman, who is quite possibly my favorite design in the bombshells series (Hawkgirl is my other favorite). I'm a trade paperback reader so I haven't had the chance to delve into her appearances in Rebirth's Detective Comics yet but I absolutely thought Batwoman's self titled series in the New 52 was one of the three strongest titles during that era. The character is incredible and I'm glad to see Kate Kane included in this series of minifigures. She's definitely one of my favorite characters and was the first figure from this series I picked out. I've completed the 10 basic figures in this series already (there are two black & white variants but I'm not too interested in them) and this starts things off. Think of these reviews as little treats from me during the Halloween season, eh? Let's jump in and play ball after the break... 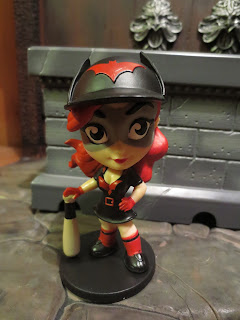 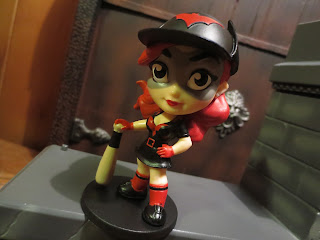 * Batwoman's baseball outfit is one of my favorite looks in DC Bombshells. It's simple and a bit punny (Batwoman, bat woman, get it?) but my gosh does it look stunning. It really manages to capture the look of Kate's Batwoman costume while still transporting the character to the 1940s. The pose is different than the statue but I like it. There's a bit of a stylized look to these, a style somewhat akin to Betty Boop. 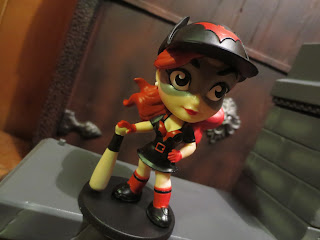 * While Batwoman doesn't have any writing on the back of her outfit like the statue (the figure's hair is covering that area) the rest of the paintwork is quite nice. Cryptozoic has definitely ensured a neat, clean paint job on these, which is especially welcome given the smaller size. Kate is permanently attached to the small display stand which makes displaying her all the easier. 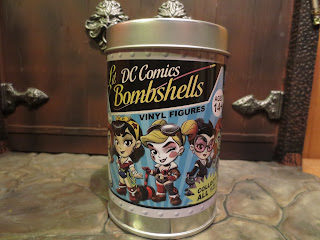 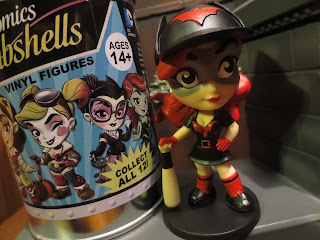 I really like these. As someone who loves the Bobmshells aesthetic but can't afford to collect all of the statues in the line, these less expensive lines are a nice option. Batwoman just might be the star of series one for me. I love the colors, the design, and the pose. While the price and the blind-bagged nature of these might turn some collectors off, this is still a really good minifigure and Batwoman collectible. She's a Great and a 1/2 item and well worth snagging if you're a fan. Stay tuned for reviews of the other 9 figures in the set!


There really have not been that many Batwoman figures released and the only product of her I've reviewed of her has been the Kotobukiya Bishoujo Batwoman. DC Collectibles has a Bombshells action figure of her scheduled for release next year and I'm hoping a New 52 era Batwoman makes it's way into either DC Collectibles' Icons line or Mattel's DC Comics Multiverse line soon. Kate Kane is one of the best and she deserves more recognition.
Posted by Barbecue17 at 9/24/2016