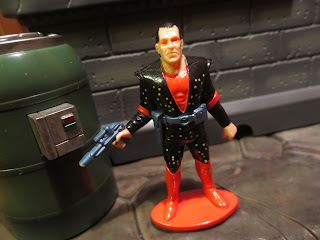 I'm really enjoying getting a chance to talk about the Trash Bag Bunch as I'm seeking to complete my collection (I'm now only in need of 7 figures) and, from the looks of the visits, many of y'all are enjoying these crazy minifigures, too! Dr. Sheen is a figure I've owned since childhood and I figured it was time to give him a closer look. He's always been the leader of my team of Disposers and now, for the first time ever, I explain why I think he's qualified to do that. And, my gosh, yes I do believe I've started writing Trash Bag Bunch fan fiction in these mini-reviews. I just never thought I'd sink that far down the rabbit hole, you know? Anyways, take a look at more words than you would ever believe could be written about this figure after the break... 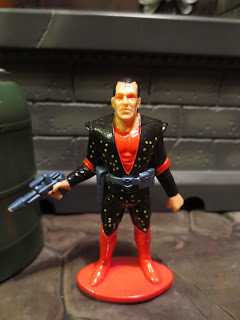 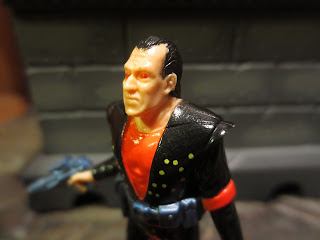 * For years,going back to when I first got this figure as a kid, I always thought Dr. Sheen looked like Bill Murray. I think it was due to the hairline. Now, though, I'm seeing someone a bit more weathered and worn; maybe James Woods or a gaunt Jim Belushi. Whatever the case, I've always imagined Dr. Sheen as the official leader of the team. Prof. Garboff is the creator of the Disposer's robotic soldiers but, like Peter Venkman in Ghostbusters, Dr. Sheen is the man who helps to put all of the moving parts together. He's part CEO, part CIA spook, and part politician. 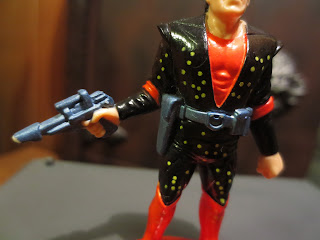 * While largely the charismatic force behind bringing the heroic Disposers together and helping to keep the force running behind the scenes, Dr. Sheen doesn't mind getting his hands dirty when the need arises. He's wielding a really cool pistol. He's got a sweet holster to store it in, too. Of course, since he tends to handle the publicity and diplomatic aspects of the team, he's also always clad in a professional looking suit. Note: In the Trash Bag Bunch universe, Dr. Sheen's suit is what passes for stylish. High dollar right there, folks. 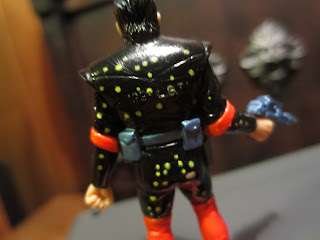 * One of the popular fads of some 1990s action figures was the random flecks of neon paint. I'm not sure what it's supposed to be here: Random bits of toxic waste? A bold, Dusty Rhodes inspired fashion trend? Leftover paint spatter from repainting a Q-Zar? I'm not that into it, to be honest. 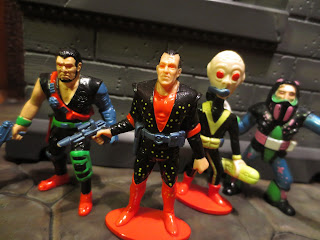 I really like this guy. He's not the most exciting figure in this series but he fills in an important role in the team to me. I do like his more normal appearance (you know, other than the red glowing eyes that all humans in this line have) and his cool pistol. I've always thought it just looked so cool! This guy gets a Great rating from me. By the way: Who does Dr. Sheen remind you of? Let me know in the comments below!


I've reviewed a number of other Trash Bag Bunch figures on this site, including: