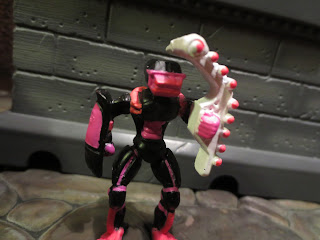 I'm really excited to review Incinerator today because he's one of the Trash Bag Bunch figures I've never owned before! Heck, he's one I don't even remember seeing pictures of. As I look as the heroic Disposers, I've noticed that there definitely seems to be a subset of heroic robots that wage war against the Trashers. I imagine that Prof. Garboff built these as part of his original goal of trying to save the planet. Dr. Sheen influenced him to weaponize them, though, and thus we end up with a pretty slick robotic army. Let's take a look at Incinerator after the break... 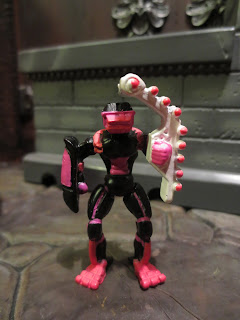 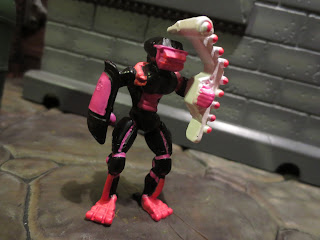 * Here's Incinerator! Build by Prof. Garboff, Incinerator was originally a robot designed to help determine emergency needs in a disaster area or emergency situation. Incinerator can quickly scan an area and proceed to send requests for specific needs directly to a centralized location. Under the guidance of Dr. Sheen, Incinerator was modified to survey a combat zone and determine the priority of targeted threats that need to be eliminated 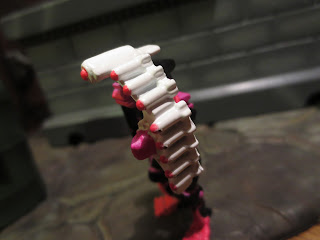 * Look at this rack of missiles Incinerator totes around! He's essentially a mobile artillery division for the Disposers! I love the white bodies with red tips: Those colors just scream bomb or missile. Maybe that's why so many toys use that color scheme. 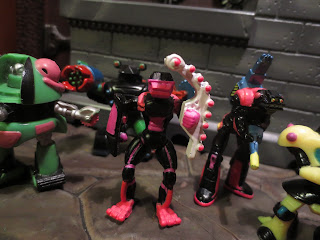 Incinerator's gigantic missile rack just delights me. I'm not sure why? It seems rather impractical, but then again, it also seems like something an early 1990s G.I. Joe figure might have carried into battle. I dig the neon pink and black color scheme, the small combat shield on his right arm, and the unusual beak-like mouth on the robot's head. This guy gets a Great and a 1/2 from me!


I've reviewed quite a few Trash Bag Bunch minifigures on this site, including: