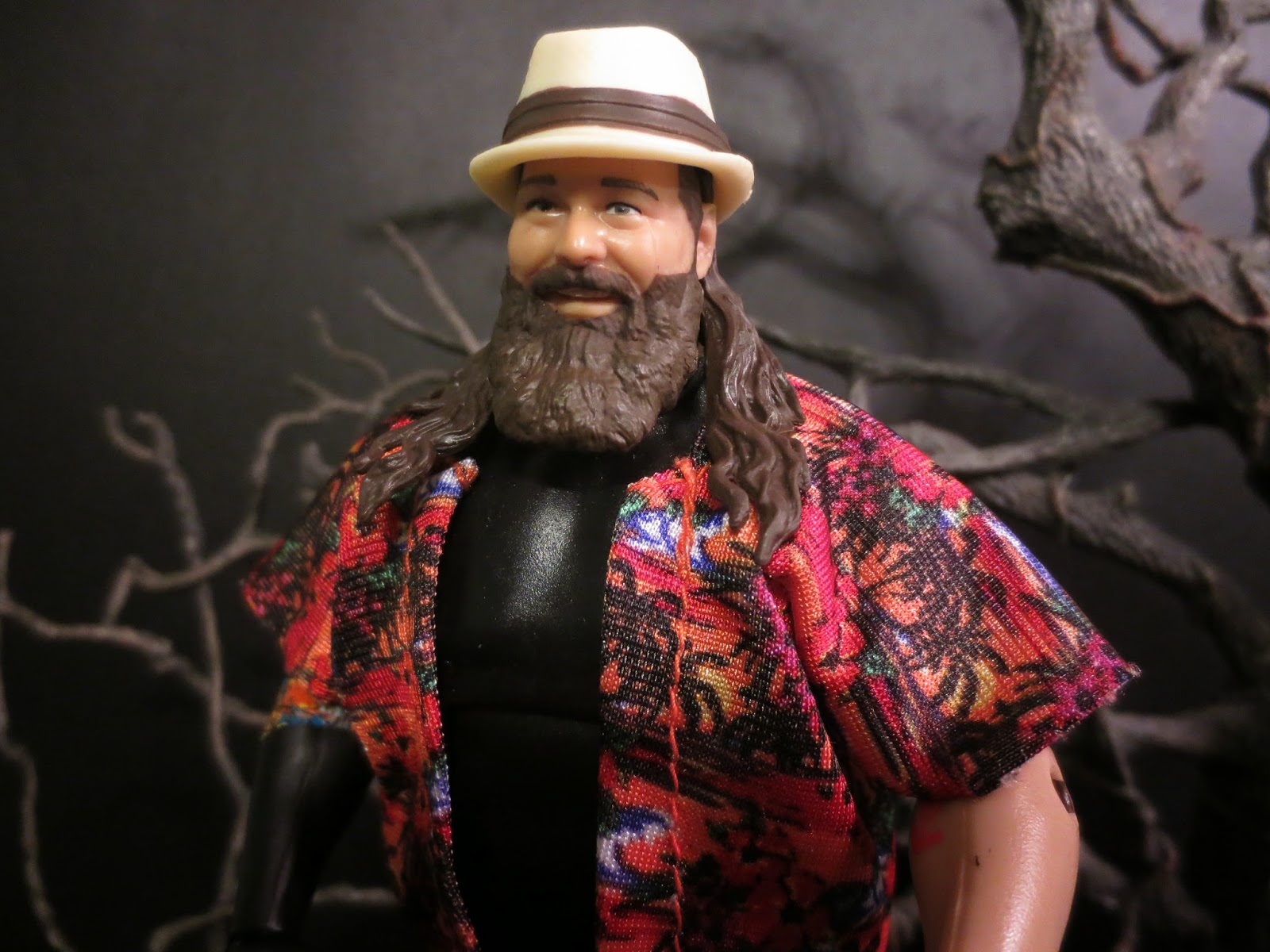 31 Days of Toy Terror brings us once again to new and terrifying places. Whether you're out in the woods with no one around but the monsters, at an old run-down carnival, in an abandoned opera house, or just investigating that mysterious little door that you've never noticed before in your living room, there's always something spooky just around the corner...

In my review of Erick Rowan from Mattel's WWE Elite Collection I mentioned that I'm not usually into wrestling or wrestling action figures, but there is just something about the Wyatt Family that really appeals to me. I'd never heard of these folks before watching Wrestlemania XXX with my fellow Epic Reviewer Andrew but I was really impressed with their theatrics. Bray Wyatt and his crew just have such a wonderful, creepy vibe that you can't help but take interest in what they're doing. Today I'm looking at Bray Wyatt, the leader of the Wyatt Family cult. Played by wrestler Windham Lawrence Rotunda, Bray Wyatt is a cryptic cult leader who claims to be more monster than man and loves playing mind games with his opponents. To learn more about this figure, follow the buzzards after the break.... 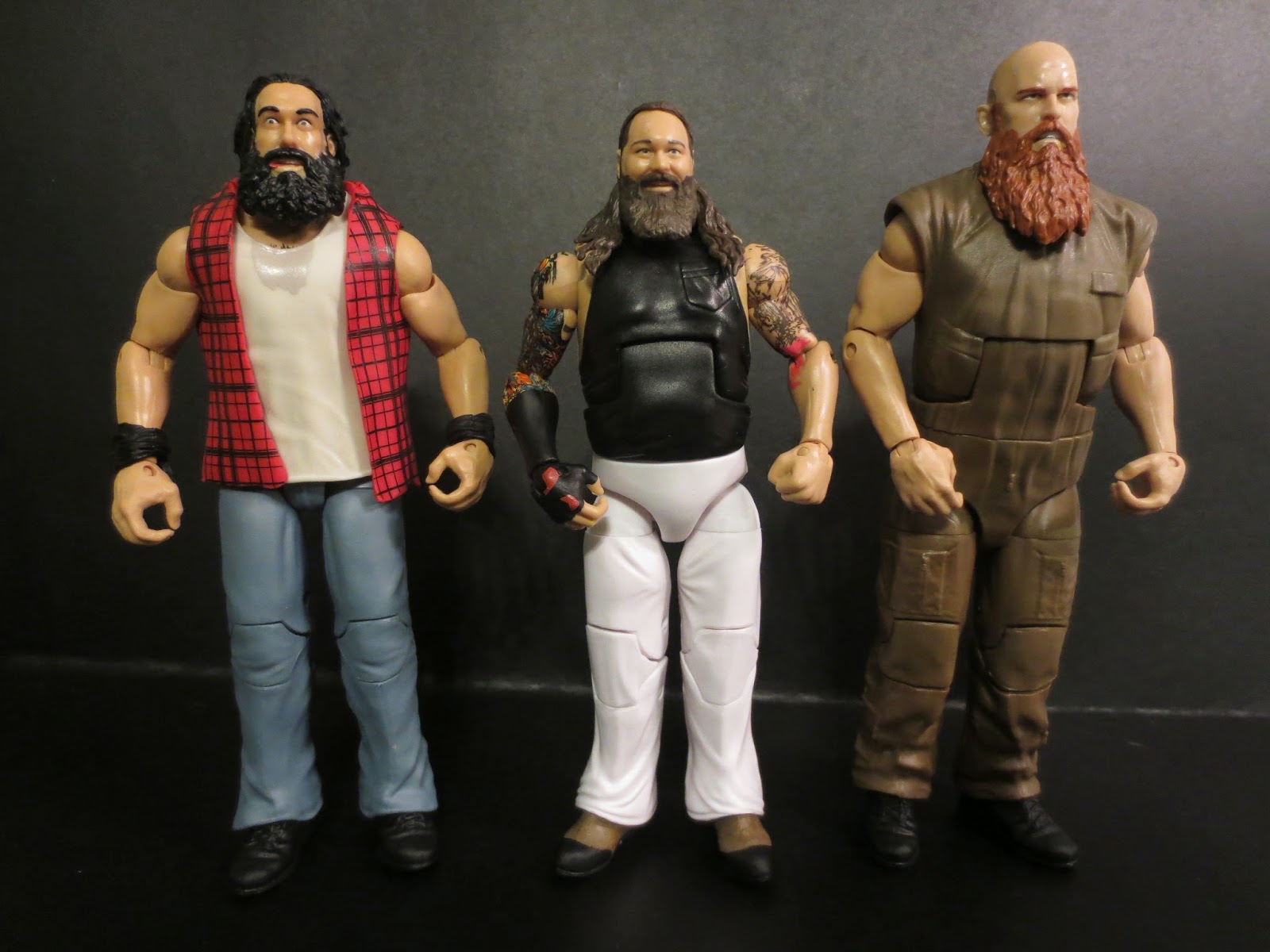 Bray Wyatt is the shortest member of the Wyatt Family and his figure reflects this by coming in just under 7 inches tall (Erick Rowan, the tallest member, came in around 7 5/8th inches). I'm not sure if the WWE Elite Collection is always this precise in giving these guys proper scale, but I'm impressed with the scale between the Wyatt Family. I really think that these WWE Elite figures are some of the best products I've ever seen from Mattel. While they're not quite up to the level of a company like NECA, I think they'd still intermingle quite well with other 7 inch action figures. The appearance of each figure is fairly realistic. 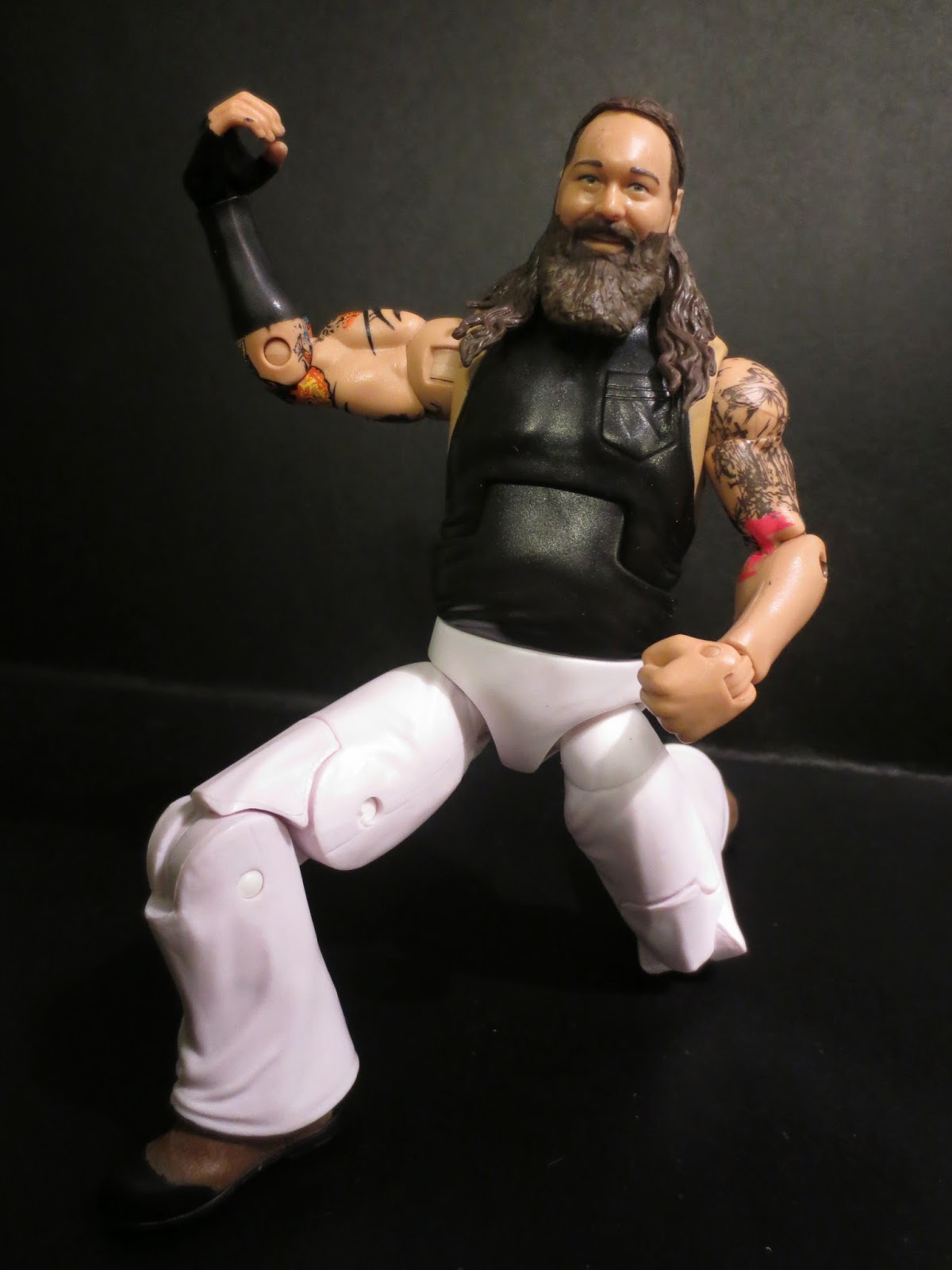 Bray Wyatt features the following points of articulation: Lateral ankle rockers, ball jointed ankles, double hinged knees, swivel hips, ball jointed hips, a swivel waist, hinged abdomen, swivel/hinge shoulders, swivel biceps, hinged elbows, swivel/hinge wrists, and a ball jointed head. As I mentioned with Erick Rowan, these guys have a great mixture of fun and functional articulation. It doesn't look perfect, but I as pretty satisfied that I could even get this guy into a pretty good spider pose. You know, that creepy spider walk that Bray Wyatt does. These figures just feel really well made. I wish Mattel would put the designers of these figures on MOTUC. Maybe we'd have less crazy problems with that line. 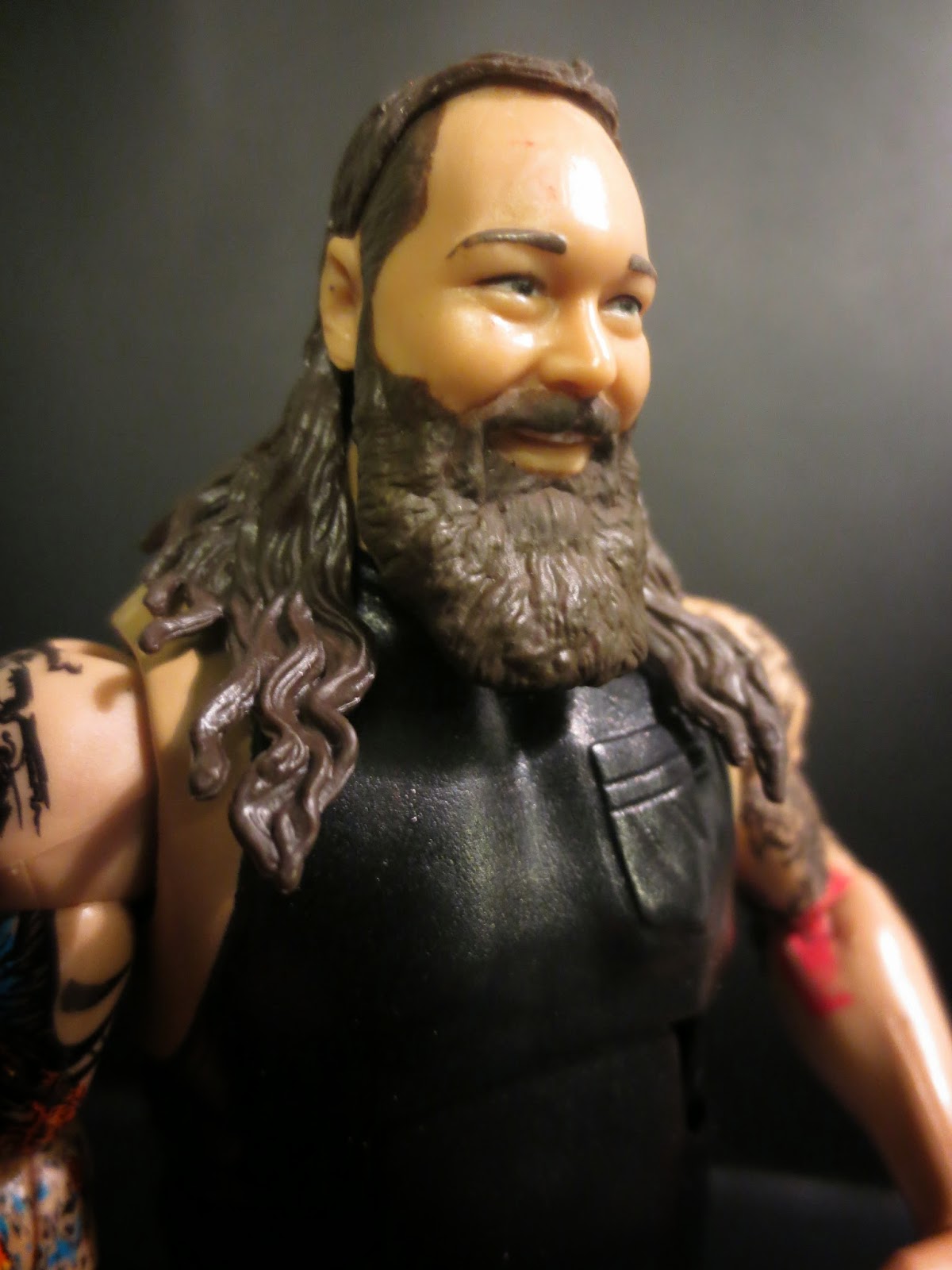 I think this is a very good Bray Wyatt sculpt although it isn't the Bray Wyatt sculpt that I bet most fans are expecting. Bray really has two distinct personalities. When he's walking the Wyatt Family to the ring with a lantern and sitting in his rocking chair watching Harper and Rowan, Bray seems like more of an eccentric country boy than a maniac. When he's in the ring, however, he seems like more of a madman. This headsculpt is great but it definitely captures a more jovial looking Bray. He's still got the long Duck Dynasty-esque beard and hair but, instead of a crazed look with stringy strands of hair on his face and forehead, Bray has a smile. His outfit is simple: a sleeveless t-shirt with a pocket, some white pants, and boots. Everything looks good, although there isn't much room for extra details or anything. 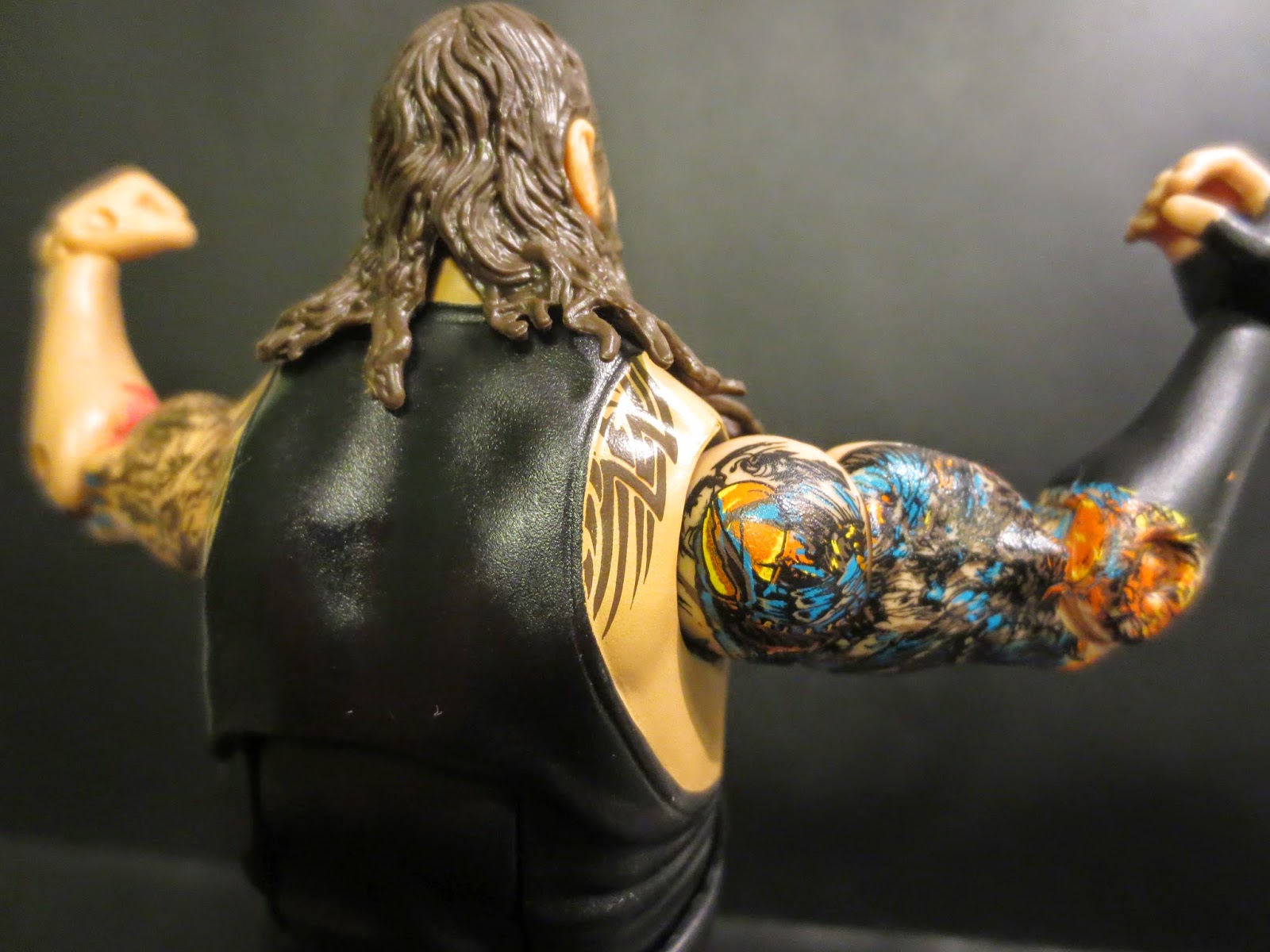 The paint work on Bray is especially impressive, particularly on his tattoos. His arms feature some exceptional tattoo sleeves that are extremely detailed and quite colorful. They look great!  Most of the figure is pretty simple with large portions molded in the appropriate colors. It's all simple but effective with nary a major error in sight. 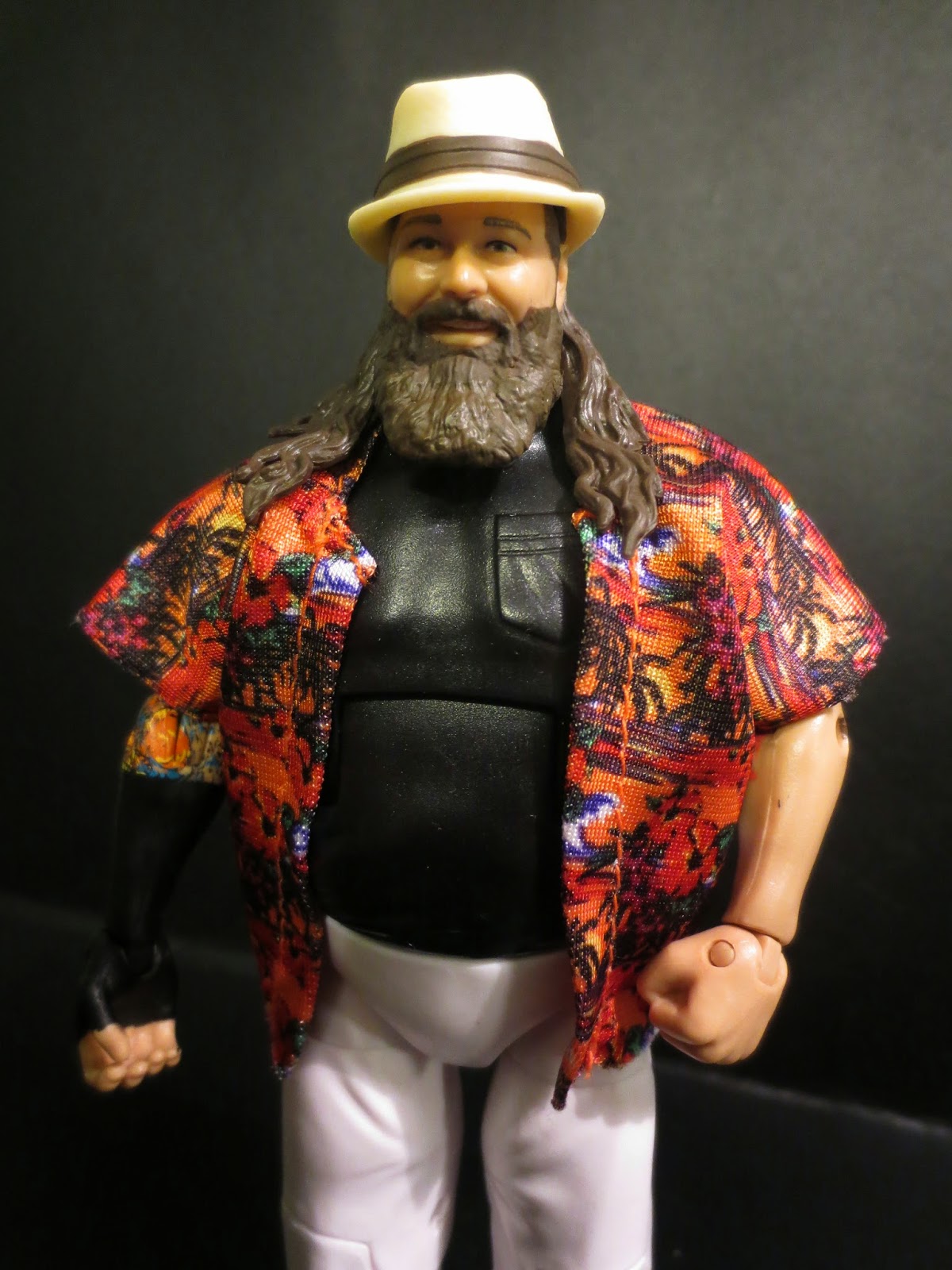 Bray Wyatt comes with two accessories which help to complete his unique look: A hat and a Hawaiian shirt. The hat is made from a softer plastic with a light patter sculpted on it. The paint work on the band is a little sloppy, but it easily fits on Bray's head. His shirt is a Hawaiian print shirt that is actually made from a soft, silky material. It fits easily on the figure and actually looks really nice. The outfit really completes Bray Wyatt's look which seems to be influenced by the character of Max Cady in both the original Cape Fear and the 1991 remake. While Bray doesn't come with his chair and lantern, Rowan and Harper come with those items. 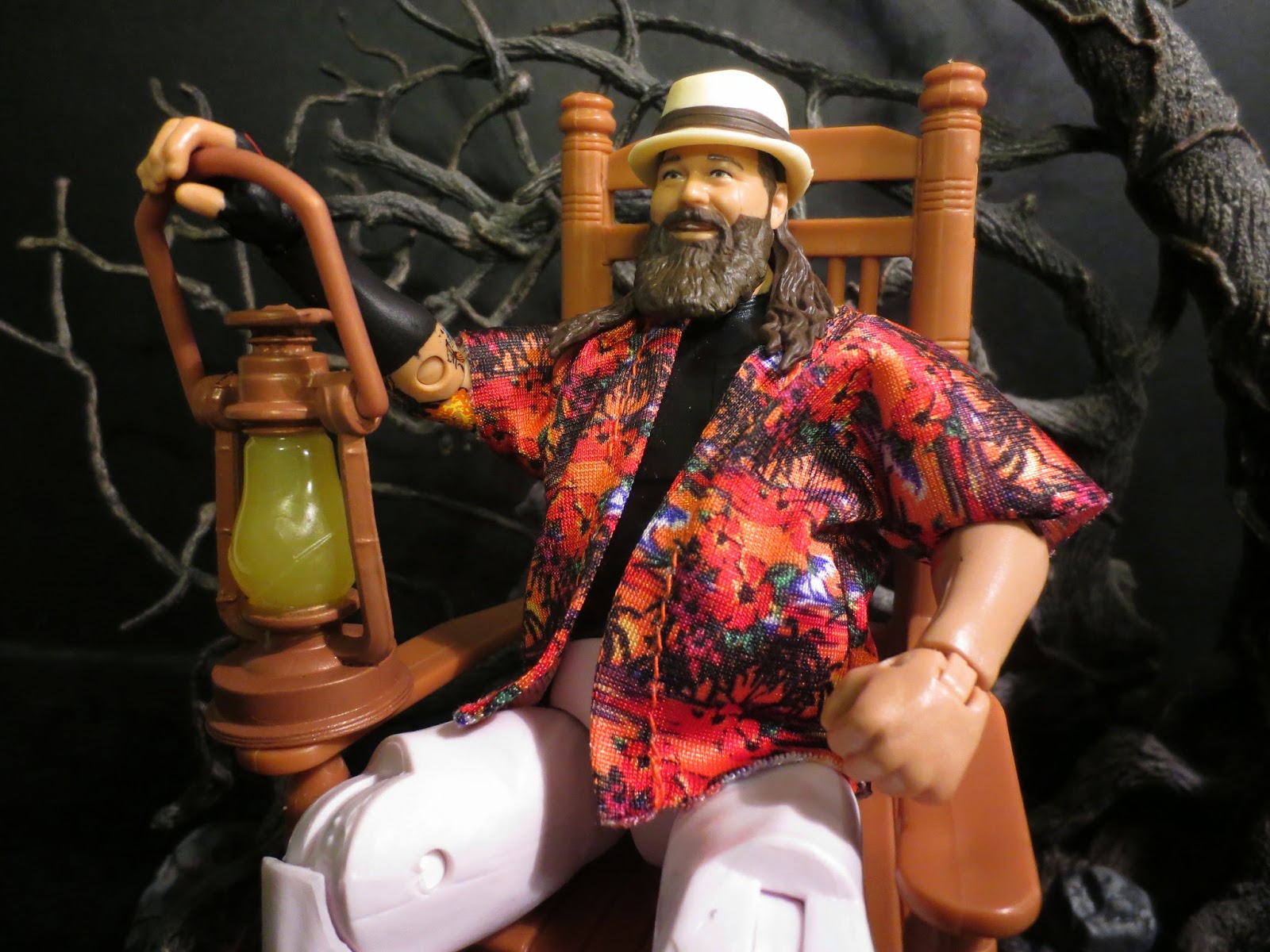 Bray Wyatt is another solid action figure from Mattel's WWE Elite Collection. He's fun, well articulated, well assembled, features some nice accessories, and really captures the wrestler's appearance well. While I'm sure that most non-wrestling fans won't give these a second glance,  I think they're worth looking at simply to see what Mattel is doing in this scale. Heck, even horror fans should give Bray Wyatt and his family a once over; you never know when you need more backwoods maniacs in your horror display. Overall, I'm giving Bray a Great and a 1/2. Mattel really does a nice job with these figures and they're perhaps one of the best blends of a collector targeted line and a durable, kid friendly toyline that I've seen.
Posted by Barbecue17 at 12/03/2014