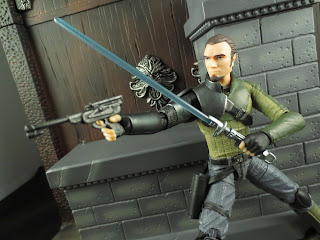 I really thought that Ahsoka Tano was going to be my favorite figure out of the current series of Star Wars: The Black Series figures, but that may just not be the case. One of the stars of Star Wars: Rebels, Kanan Jarrus is a Jedi who survived Order 66 as a Padawan and now works with the Lothal Rebels in fighting against the empire. If you're at all keeping up with the new Star Wars stuff, you'll definitely recognize him whether from his TV, book, or comic appearances. While most of Phase III of the Black Series has been heavily focused on The Force Awakens, the second series of 2016 has given us one original trilogy figure (an Episode IV Luke Skywalker) and two figures from Rebels. The pre-ANH era might just be my current favorite time period in Star Wars to explore and I'm loving Rebels, so Kanan is a real treat for me. Ready for a closer look at this incredible figure? Then join me after the break... 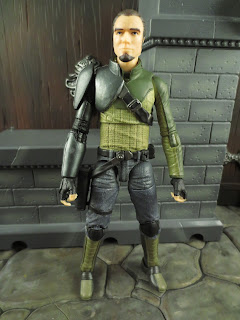 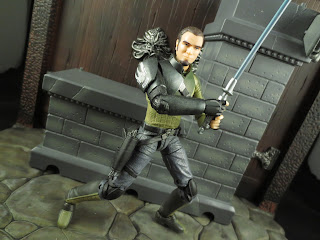 * Kanan's articulation is incredible and quite flawless. There's nothing about his costume that hinders his movement, not even the pauldron on his right shoulder or the holster on his right hip. He's solid, durable, and looks cool in so many different poses. This guy is pure Star Wars win. 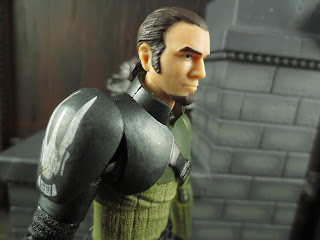 * Like with Ahsoka Tano, Hasbro opted to render Kanan as if he were an actual film character rather than trying to capture the animation style of Rebels. I like that choice, particularly for the Black Series, and I'm pleased to say that Hasbro did an excellent job. They managed to capture all of Kanan's facial features and his pulled back hair and goatee really well. This figure looks a lot like the depiction of Kanan on the cover of the book A New Dawn which was the first novel in the current all expansive canon. 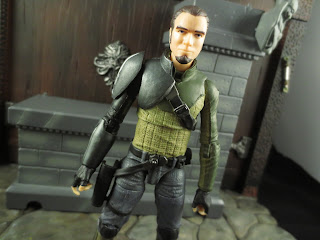 * I love Kanan's costume. It's pretty simple yet it has that classic Star Wars vibe to it. Hasbro nailed it! It reminds me of so many things I like such as some of the Ralph McQuarrie concept sketches and Kyle Katarn from the Dark Forces video game series. 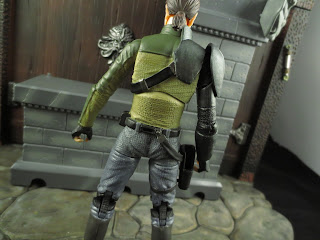 * From the back of the figure you can more easily see that Hasbro has used quite a few different textures to represent Kanan's outfit. The majority of his shirt has a more quilted look to it while the sleeves appear to be somewhat wrinkled as if made from a different material. His armor appears solid and smooth and has a nice, weathered paint job to it. The paint and texture work here rivals nearly anything anyone else is doing in this scale and style. 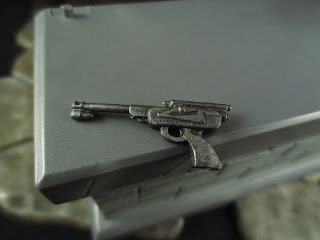 * Further showcasing his role as a "cowboy Jedi" Kanan also carries a plaster pistol. He favors a DL-18 blaster pistol as his sidearm of choice, a pistol that should look familiar to you: It's the pistol that Luke swipes from a guard at Jabba's palace in Return of the Jedi. It was also included as an accessory with the Jedi Luke Skywalker in the vintage line and with Han Solo in Carbonite in the POTF2 line. I've always loved this pistol and it's cool to see it in the Black Series. 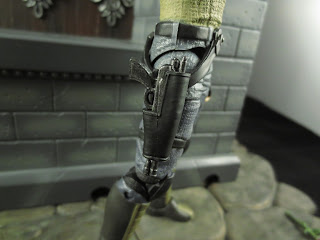 * The DL-18 blaster pistol fits perfectly in the holster on Kanan's right hip. What's also really nice about the holster is that while it's permanently attached to his belt with straps, the bottom of the holster attaches to Kanan's thigh via a peg. That way the holster looks perfect and stays in place when on display but it doesn't impede his movement if you need to rotate his hips swivel joints. It's really well thought out. 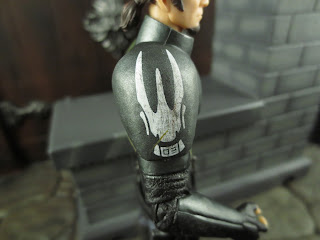 * Here's a closer look at the paintwork on Kanan's pauldron. Pretty boss, right? Yeah, I think so too. 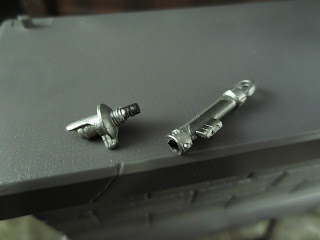 * One of the key elements of Kanan Jarrus' character is that he has to hide who he really is. Not being able to use his real name (Caleb Dume) nor to let on that he is a Jedi for fear of being hunted by the Empire, Kanan has configured his lightsaber to disassemble into two separate parts to keep it inconspicuous while still keeping it close at hand. Hasbro did an excellent job of crafting this piece with the ability to be broken down into two parts and to be stored on Kanan's belt. 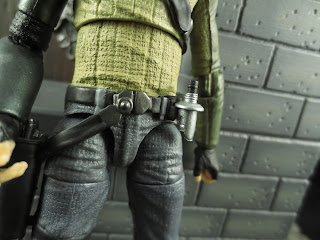 * The blade emitter portion plugs snugly into the front of Kanan's belt on the left side. 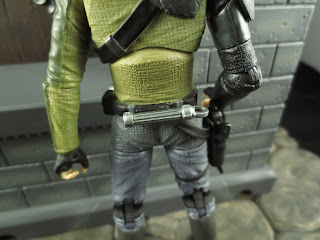 * And here's the grip and hilt of his lightsaber. It snaps into a slot on the back of his belt for safekeeping. 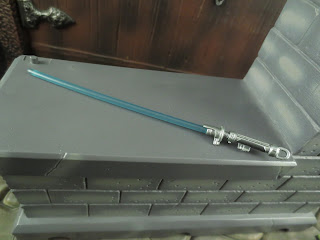 * While I love the way Kanan's saber assembles and disassembles, I'm still not totally sold on the removable lightsaber blades in this series. It works OK most of the time but I still think I'd prefer to get a solid lightsaber and a separate hilt, like in the Vintage Collection. Maybe I'm still traumatized from how often these removable blades broke back during the Attack of the Clones line. 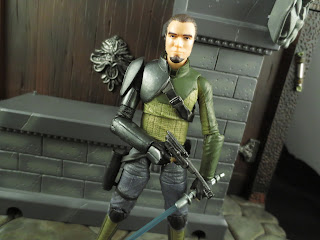 I'm not sure that I can say that Kanan is the best figure Hasbro has released in the Black Series, but he's definitely up there. Everything just came together perfectly for this figure! That really has me excited as it seems Hasbro maybe has some real love for Rebels and I think more than any other faction or group (other than perhaps the ESB bounty hunters) I want to complete the Ghost crew. Sabine Wren is on the way, so that just leaves Ezra Bridger, Hera Syndulla, Zeb Orrelios, and Chopper. That should be doable, right Hasbro? You've already made an Epic Kanan: Get cracking on everyone else!