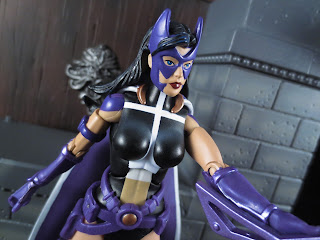 As I mentioned in my review of the DC Universe Signature Collection Ra's al Ghul last summer, this was one of Mattel's subscription lines that I just skipped over originally due to really only wanting the Batman themed characters from the line. Recently, though, I completed a trade with someone over at The Fwoosh and found my self with most of the figures from the collection I wanted. Huntress was one of the main ones I was missing, though, but a quick search online helped me to realize that she wasn't expensive to obtain at all! Now I have Mattel's interpretation of Ms. Helena Bertinelli, also known as the Huntress. Originally released as the September 2013 figure in Club Infinite Earths, Huntress has now made her way into my collection. Ready for a closer look? Then join me after the break... 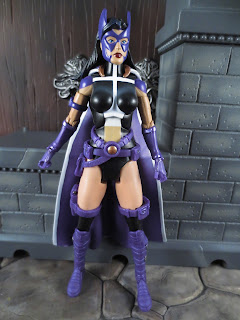 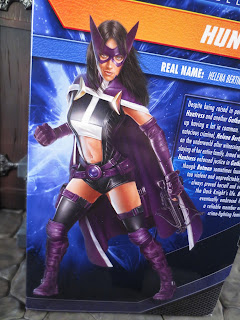 * I don't usually talk about the packaging much but I really do want to point out the beautiful painted rendering of Huntress on this packaging. Heck, not only does she get a great graphic image but she gets a pretty decent bio and the package is resealable. If anyone knows the artists responsible for these, please let me know! This is just much nicer than what we typically see on toy packaging these days. 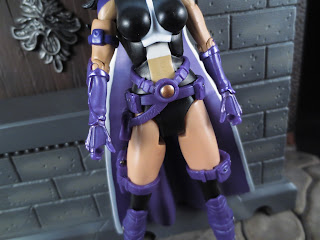 * One of the best things about Huntress is that unlike many figures in Mattel's DC Superheroes/Universe Classics/All Stars/ Signature Collection family, Huntress features quite a few new parts. Besides her cool belt, she has unique biceps and thighs with little pouches attached and some pretty impressive gloves and boots. Mattel didn't skimp on giving her some unique detail to set her apart from the pack. 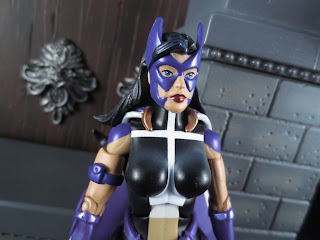 * I really like Huntress' headsculpt. It took me a bit to get past the armored guards on the side of her face, but they are well executed and are not just painted on: These are actual sculpted details! The paint work is pretty impressive overall as well. Heck, even the white lines over the black outfit are pretty neat and clean. 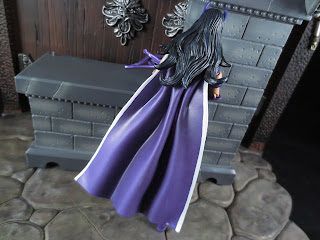 * From the back Huntress still looks pretty sharp. Her long, flowing black hair is sculpted quite nicely with a but of motion to it and her cape has some folds in it so that it doesn't appear like a static piece. You can really imagine that this thing has a bit of a breeze blowing through it. It's not incredibly severe or drastic, but just enough as to where it makes the figure seem a bit more dynamic. 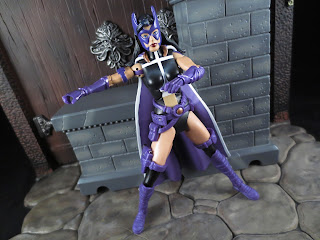 *If you've ever held any of Mattel's DC Universe Classics female figures, you probably have a pretty good idea of what to expect here. While that holds true, I have a problem with Huntress that I haven't had with any other Mattel DC figure: The swivel aspect of her "H-hinged" legs doesn't want to turn. It seems like the peg might be bending, rather than turning. That's a big warning sign and I'm going to just leave her legs in one pose from here on out! 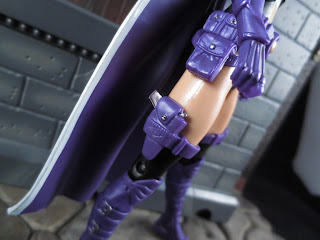 * While I do love all of the cool unique detail on the figure, I really wish that Helena's pistol had been an actual removable accessory. This would have actually added quite a bit more to the figure. Even though this figure was released in 2013, permanently sculpted pistols were still a thing of the past at that point. 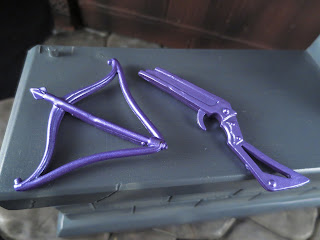 * In and of itself this crossbow isn't bad. I kind of like the metallic purple look of it and, considering how much reuse this line features, Huntress can hold it quite well considering it's not like she was sculpted with this particular weapon in mind. No, what's frustrating to me is that Huntress is know for using smaller, crossbow like pistols, as features on the art on the package. This is a more traditional crossbow and wasn't exactly what I was expecting. 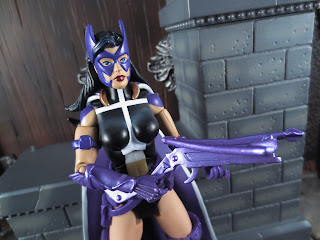 Mattel did a pretty decent job with Huntress. Seriously, she has way more new parts than most other figures in this line! While I'm not wild about her crossbow or the fact that she has a non-removable sidearm, I really can't overlook the problems I'm having with her "H-hinged" hips. Something like that is a pretty big QC issue, particular when this is a figure I can't just return. In the end, that hurts Huntres and she ends up with a less than enthusiastic Eh and a 1/2 score. She still looks good on display though, which is important since that's about all she can do now.

Oddly enough, I haven't reviewed any other Huntress figures on the site. I've only reviewed one other DC Universe Signature Colection figure so far, too: Ra's Al Ghul
Posted by Barbecue17 at 3/12/2016