Action Figure Review: The Comedian from Watchmen by Mattel 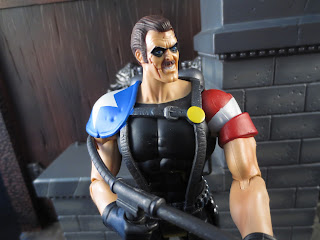 There are a number of comics and graphic novels that people call classics and repeat over and over about how amazing they are. Watchmen is one of the few that actually lives up to the hype. Seriously, I reread it about every other year and I constantly find myself finding new details and connections in the story. I'm a huge fan but I passed up Mattel's Club Black Freighter subscription back in 2013 simply because I wasn't sure to expect with Mattel and this line. I also already had the complete set of DC Direct's figures from the 2009 film, and at the time I kind of questioned whether or not I needed another set. After a recent trade at The Fwoosh, however, I ended up with the entire set of six figures and now I'm finally getting a chance to check them out. Today I'm starting with the Comedian, an extremely divisive figure in the Watchmen universe. Is he a heroic patriot or a murderous sociopath? Well, he's definitely a murderous sociopath. Is he a worthwhile addition to your toy shelf? Join me after the break and see for yourself... 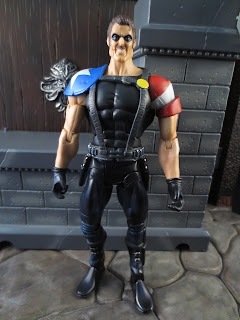 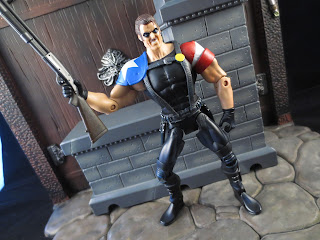 *Since these figures are basically built using DC Universe Classics pieces, they're pretty sturdy and can take some fun poses. It's really rather surreal to have some Watchmen figures that are legitimately toys rather than being just small articulated statues. You can play out the adventures of the Comedian with new Watchmen action figures. From Mattel!!! 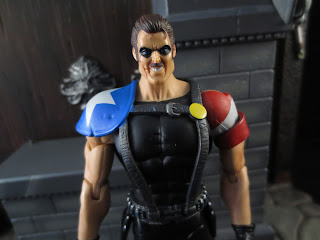 * The sculpt is pretty well. In this interview with Scott Neitlich, the brand manager for MattyCollector when these figures were released, Neitlich mentions that the goal for this line was to make it work with the reuse of DC Universe Classics parts. Combining the base body with a scarred headsculpt (this is the Comedian after he kills the Vietnamese woman he impregnated) and some web gear, Mattel did a pretty decent job of Eddie Blade in his star spangled battle gear. 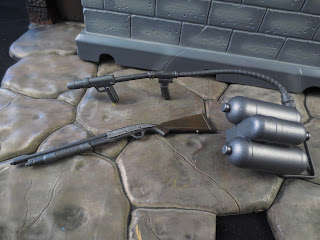 * The Comedian comes with two weapons: A flamethrower and a shotgun. While both accessories are a bit rubbery, hey do have decent sculpts and look pretty good when displayed with the figure. The shotgun has a nice paintjob while the flamethrower actually plugs into a slot on the Comedian's back. He can actually hold the flamethrower pretty well, which is definitely a plus. 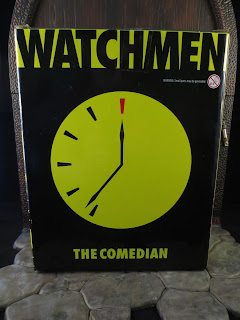 * I don't usually feature packaging much on the figures I review but I just have to with the Watchmen line. While Mattel definitely can be accused of being a bit cheap with these figures, the packaging is all together pretty stellar. I'm not going to cover it with each figure so I'll be redirecting each of my reviews back here to check out the packaging. Rather than use the iconic smiley face logo on this sturdy cardboard box (which as mentioned above, has some bizarre trademark issues) Mattel opted to use the doomsday clock. It's kind of fitting, though, as Watchmen uses a number of similar symbols in creating the book's imagery. Each of the figures have the hands on the doomsday clock set to a different time. The Comedian's is set at 7 hours until midnight. 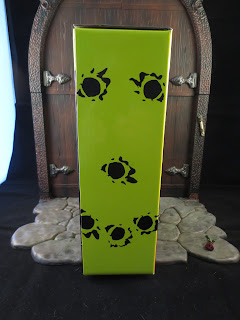 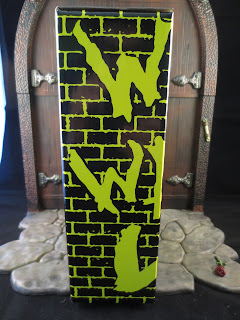 *The other side of the box features part of a wall mural that asks "Who Watches the Watchmen?" Each figure in the series has part of the phrase on the side of their box. Assemble all six and you have a cool way to display these boxes if you so desire. The Comedian comes with the first part of the phrase. 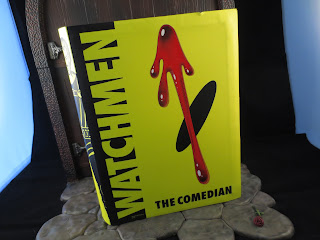 * Inside of the outer card box is a smaller box that resembles a graphic novel (the sides of the plastic trays inside even resemble pages). The cover of this package looks really cool and could easily slide onto a shelf for storage. 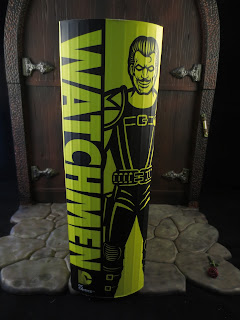 * On the spine of each "book" is a an image of the character, giving each set a nice bit of personalizaton. 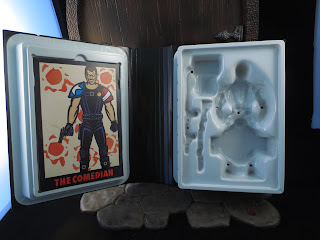 * Once you open up the "book" you find two trays: One holds the action figure and the other holds a cool, stylized art print of the Comedian. it's a two sided print and the other side has a short bio of the Comedian's role in the story. I have to admit that I rarely keep packaging, but this packaging actually rocks. Yeah, the figures are weirdly held in place initially by rubber bands (completely unnecessary) but once you remove those you can easily remove and reinsert the figure. This is some cool stuff! 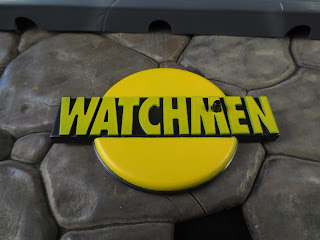 * Another thing I really like about this line is that every figure comes with a display stand. It's a simple disc and peg stand but the presentation is awesome. The word "Watchmen" is sculpted on the base with a yellow disc behind it. It looks great and functions really well. I wish the DC Universe Signature Collection had come with stands; I'm always in favor of stuff like this. 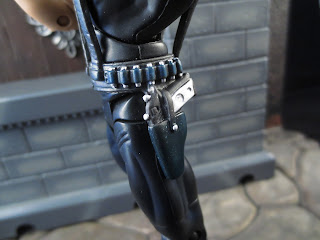 * One of my biggest pet peeves on any modern action feature is when a company sculpts a weapon as a non-removable part of the sculpt rather than making it a removable piece. The Comedian's pistols should have absolutely been one of his default accessories, probably even more so than the shotgun, but they're left as part of the sculpt of his belt and web gear. There's also a non-removable knife on his left ankle, too. Seriously, is this even acceptable anymore? 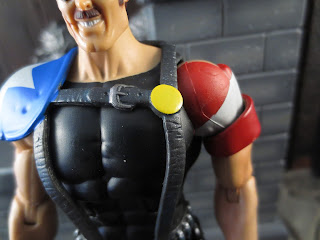 * Notice something missing on the Comedian? If you said something akin to "Hey! His smiley face badge doesn't have a smiley face on it" then you're absolutely correct. It's really bizarre but apparently the smiley face logo is trademarked in some countries but not in the good ol' U.S. of A, so it seems that Mattel just opted to not include the detail. kind of bizarre since it's a pretty big deal in the comic and an iconic part of the Comedian's personality.

*Also, notice the hinge on the Comedian's left shoulder is flesh colored rather than red. Bizarre. 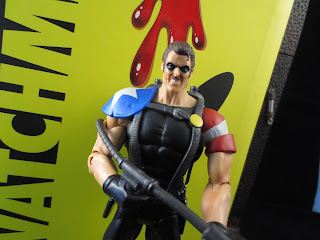 These figures hit around the same time that Before Watchmen hit (a series I have not read yet) and I do have to admit that these feel a little rushed. With the amazing packaging and design work here, the actual figure of the Comedian feels a bit lacking. For a $25 figure with reused parts, you would think he'd at last also have his pistols and maybe a removable gimp mask or something. Still, it is pretty cool to have a solid Comedian figure to fit in with my large DC Universe collection, so that's a huge plus. At the end of the day I do think the Comedian is a Great figure in this series and he's well worth checking out. While he has flaws, he still might be one of the best figures in this set.

I haven't reviewed any other Watchmen figures yet but I will be reviewing this entire series over the next couple of weeks. Keep checking back!
Posted by Barbecue17 at 3/16/2016