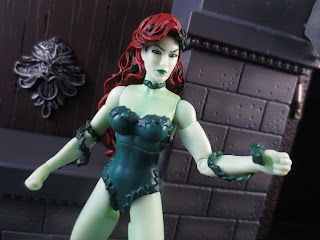 If you think about it, Mattel's 6 1/2 inch DC lines went almost 10 years without making a Poison Ivy which is pretty crazy considering that she's one of the most prominent Batman villains out there. There was no Poison Ivy in their original 2003 Batman line nor the Batman and Superman driven DC Superheroes. DC Universe Classics also failed to deliver Dr. Pamela Isley and they somehow didn't work her into the Batman Legacy line. Finally, though, Poison Ivy made it into the first year of the DC Universe Signature Series. That's a long time to wait for one of Batman's most popular foes. I didn't subscribe to Club Infinite Earths when it was running and I've regretted not doing so because I've really wanted Ivy for a long time. Fortunately, a recent trade has finally allowed me to get my hands on this really cool figure. Ready for a closer look at Poison Ivy? Then join me after the break... 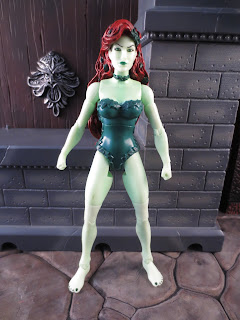 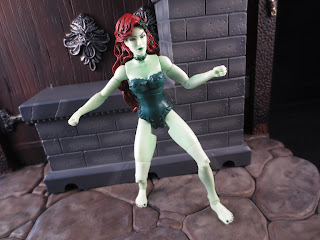 * Ivy has some solid articulation. While articulation has really improved in leaps and bounds over the past 10 years or so since Mattel introduced these body types, it's still a pretty solid model and Ivy looks good utilizing it. Maybe it's the color of her body but I don't find that the articulation here visually breaks up her sculpt too much. 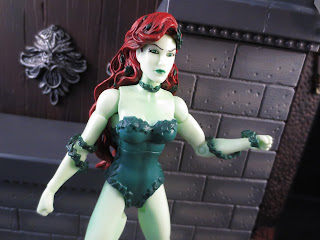 * It's definitely really cool that Mattel went with a very unique sculpt with Ivy (her limbs might be reused, although I don't recognize the bare feet from another figure) as she definitely has a unique outfit and a more slender build than someone like Power Girl or Wonder Woman. I like her headsculpt, too. This is a pretty stern looking Poison Ivy and she definitely looks like she means business. 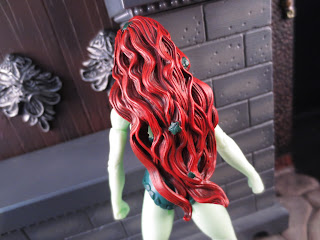 * Ivy's deep red hair is gorgeous. It's a solid sculpt but it looks fantastic. The dark wash really makes it look even more appealing and the scattered leaves throughout definitely make it completely and utterly Ivy. 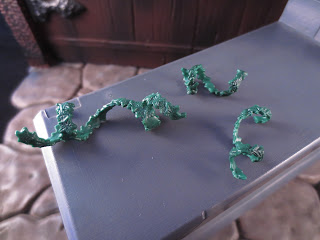 * Ivy's only accessories are three little creeper vines that can wrap around her arms and legs. They're molded in dark green plastic and have some decent sculpting on the little leaves. They're very flexible so you can slide them on and off with ease. 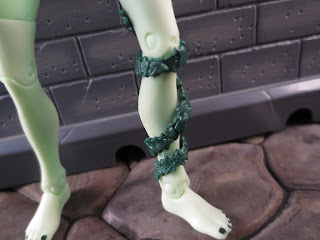 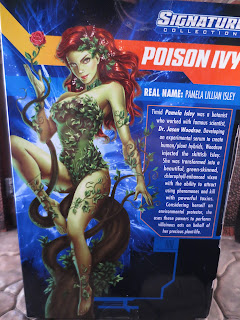 * Last, but not least, here is Mike Thompson's packaging art. I love it! This is a fantastic rendition of Ivy. Heck, now I wish the figure looked more like this artwork than the toy we got. 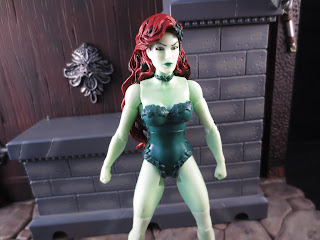 * I'm not quite sold on Poison Ivy's green hue. I think it needed to be a bit darker, perhaps a deeper green. This green is a bit too neon or yellowish green for my taste. This is really tough to see in pictures but it's more the green I would expect with a radioactive or spirit character than a plant based character. It's not bad, but it's not ideal in my mind. 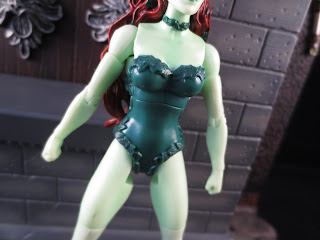 * Is it just me, or is Ivy's outfit just a bit bland? I like the leaves around the edges but it seems like it should have more leaves on it and be a bit brighter in color. This seem to be a bit too dark and not "organic" enough. 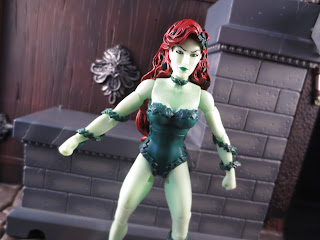 I'm really glad that Mattel did eventually release a Poison Ivy in this scale and style and I'm glad that I've finally managed to pick her up after 4 or so years of searching. It turns out that she's definitely not the greatest Poison Ivy figure ever made, but she's still a pretty solid entry in this line. I'd say that she's well above average and deserving of a Good and a 1/2 rating. She tends to be fairly costly on the aftermarket so shop around and do your research before you pick her up. Oh, and wash your hands after posing her. You don't want to get a rash.

If you're looking for more figures from Mattel's DC Universe Signature Collection, check out my reviews of:
Batzarro
Black Mask
Huntress
Ra's Al Ghul
Posted by Barbecue17 at 3/27/2016