Minifigure Review: Boo from World of Nintendo by Jakks Pacific 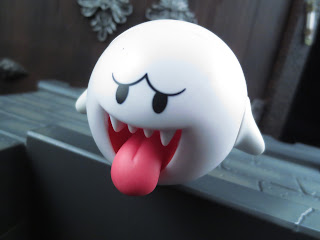 While I've been a fan of Jakks Pacific's 4 inch World of Nintendo line since the end of 2014, I've actually avoided the companion 2.5 inch line because it just seemed like a budget line of smaller, less articulated minifigures (not that I dislike minifigures). What I've just realized recently is that while there are plenty of minifigures that don't fit in with the 4 inch line, there are also plenty of figures that make great companion pieces. Take the subject of today's review, Boo, for example: At 1 7/8ths inches, Boo works incredibly well with the larger World of Nintendo line! Originally appearing in Super Mario Bros. 3 back in 1990 (and 1988 in Japan!), Boo has been around for a long freaking time! Ready for a closer look at this classic Mario enemy? Then join me after the break... 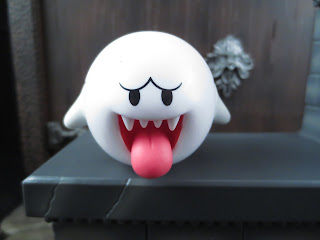 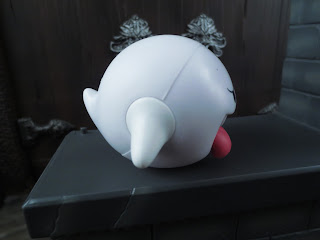 * I was really surprised to find that this little figure actually had any articulation at all. It's not much but, for a figure under 2 inches that I figures was a non-articulated minifigure, swivel shoulders are a pretty nice extra. Would you still call these shoulders on a ghost? Flippers, maybe? I'm not sure. What I do know is that they spin. 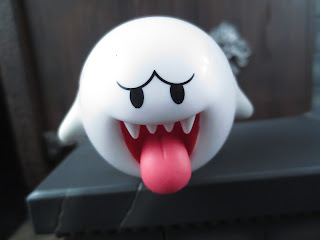 * Just the overall shape of the Boo is captured perfectly here. Boos have a very simple rounded, traditional ghost appearance. There's really not much required except that the shape be accurate, the paint be nice and white, and the texture be smooth. Jakks did right by Boo-lovers of all ages with this little guy. 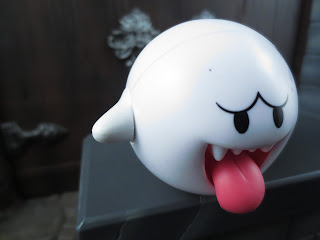 * Not only does Boo's tongue playfully stick out of his mouth but his mouth is actually a hollow recess. This seems like a simple sculpt but a little detail like that adds some nice depth to the figure. I love the shape of his little fangs, too! 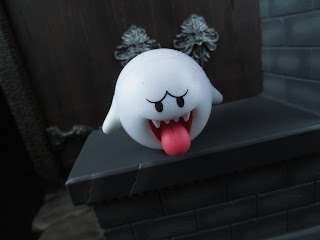 * The only real complaint I have about this little ghost is that he doesn't come with a stand of some sort. Boo has a flat spot on his stomach that allows the figure to stand on a surface without rolling, but a small clear stand to add some elevation would have been an excellent addition. Boo needs to hover eerily off the ground just a bit, y'know? 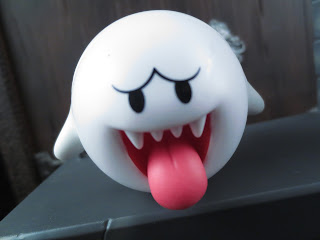 This guy was kind of an impulse grab but I wound up being really happy with how well he fits in with the 4 inch World of Nintendo line. I now kind of wish I'd picked up a few others in the past such as Captain Olimar and the Pikmin and Bullet Bill. Boo's not the best toy out there but he adds another solid villain to the World of Nintendo shelf. He's a Good and a 1/2 figure, especially if you manage to snag him for under $4 like I did. Target seems to have the best prices on these, so check them out and see if you get lucky!


I haven't reviewed any other figures of Boo nor any other figures in the 2.5 inch World of Nintendo line, but I have reviewed some other ghost figures such as the Imaginext Ghost, the MOTUC Spirit of Grayskull, the Minimates Spectral Ghostbusters, one of the ghost kids from the Star Sweater Coraline figure set, and The Gruesome Ghost from Mad Monsters. If you're looking for more World of Nintendo fare, I've reviewed most of the 4 inch figures released: