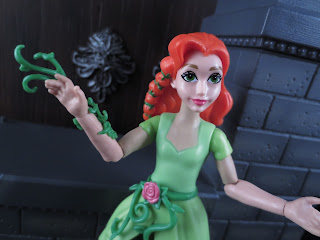 If you're looking for some more in-depth thoughts on Mattel's new DC Super Hero Girls line, check out the introductions for the 6 inch and 12 1/2 inch Batgirl reviews from the series. Today I'm looking at Poison Ivy, one of the villains from the new series of action figures which are geared towards girls. Since I collect most Batman villains released in a 6 or 7 inch scale, I just knew I had to pick up Poison Ivy (Harley Quinn was already gone when I reached my local Target). Check her out after the break... 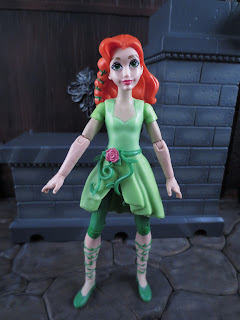 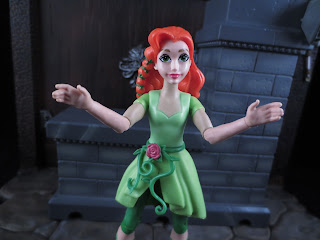 * I do like the overall look of this figure. While she's a little on the plain side in terms of style and detailing, there are definitely some positive qualities here. I like Ivy's bright red hair and how she has a some pieces of vine tying up a braid on her right side. I also like that her hands are kind of expressive, almost as if she is in the middle of controlling some plants using her powers. 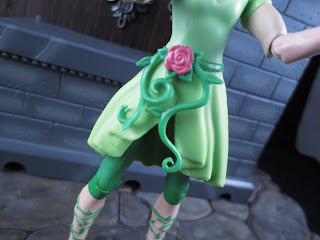 * I love the little pink flower with creeping vines on her belt. It really adds something visually to what is otherwise a fairly dull figure. The fact that the flower and vines are a separate piece also gives them a nice three-dimensional effect. 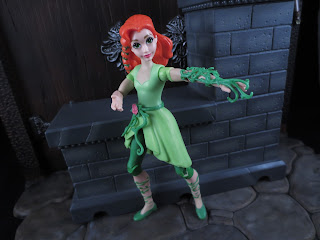 * Like Batgirl, Ivy is a fairly durable action figure. While not as articulated as a DC Comics Multiverse or Marvel Legends figure, Ivy certainly has more than the 5 points of articulation so many figures targeted at kids are sporting these days. She can take on some nice poses, particularly due to the cool, expressive hands she has been given. She also has a ball jointed head that's functional even with her long hair. I like it! 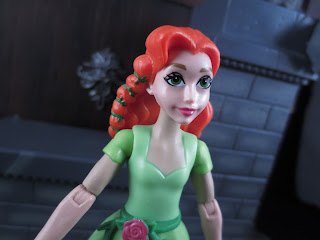 * One of the big drawbacks to this figure is that Poison Ivy looks really, really plain. I mean, while the rest of the crew really have some cool, redesigned outfits, Ivy's basically just rocking a green dress with some vines. I know Ivy's usually not wearing much of an outfit, but something about the character isn't translated as well here as it is on the other figures. 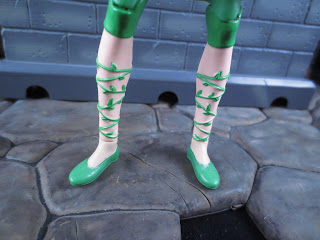 * I like the design choice to feature some vines creeping around Poison Ivy's calves and ankles but the paint work is a but too splotchy for a detail like this. This line has a very neat, clean look to it and sloppy paint doesn't mesh with that too well. Furthermore, Ivy's feet seem to be molded in green plastic and the tops of her feet are painted with her flesh tone. They look noticeably darker than her legs, though, which just looks odd, particularly when the vines visually draw your attention there. 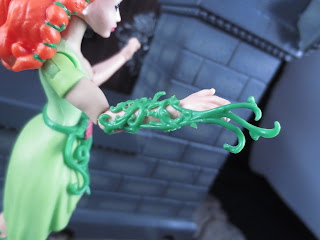 * Ivy's only accessory is a small creeping vine that can attach to her forearm. Honestly, it's a pretty weak extra. It's totally fitting but surely something larger and a bit more fun could have been included. I think a venus flytrap or something with a bit more color would have really helped Ivy to stand out more amidst a line of colorful characters. 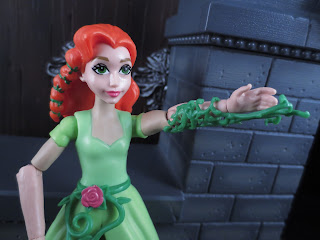 Poison Ivy is a nice sturdy figure with a few decent design elements and a solid headsculpt, but I think she suffers from being a bit too bland. Considering the nice design work on the other figures in this line, I just don't think Poison Ivy matches their quality. Besides her paint flaws, her accessory could have also stood to have been something more elaborate and exotic to make up for the other shortfalls, but her wimpy little vine ends up feeling more like an afterthought. She honestly seems pretty forgettable and, unless you're a huge Poison Ivy fan or are purchasing these for a child who wants the entire series, she's quite unnecessary as well. She gets an Eh and a 1/2 from me.