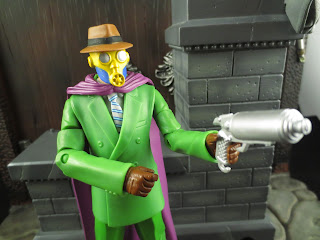 I have a soft spot for the older, more mystical DC characters and I finally decided to pick up Sandman from series 19 of DC Universe Classics. Based on the original incarnation of the character from the late 1930's, this version of the character (who is really Wesley Dodds, a masked crusader and a pulp hero) has been overshadowed by Neil Gaiman's version of Sandman. They're really, really different, but Gaiman did make some connections with the two. My wife is a huge fan of Gaiman's Sandman so when this figure arrived in the mail I asked her if she could identify it. It turns out she couldn't. I guess she wasn't paying fully attention while reading those Sandman Omnibus editions, huh? Anyways, Wesley Dodds here originally included the left leg of Series 19's Collect & Connect figure S.T.R.I.P.E. but since I picked this one up second hand the piece was missing. That's OK, though, as I'm not planning on building S.T.R.I.P.E. anyways. I'm more interested in having this guy chill with other older superheroes and pulp heroes. Ready for a closer look at Sandman? Then join me after the break... 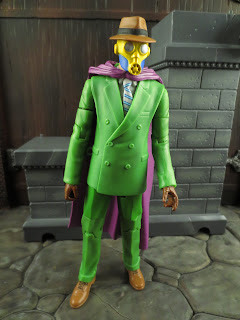 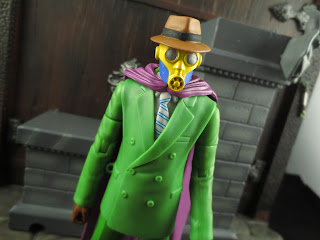 *Sandman just screams classic Golden Age comic book coloring. I absolutely adore his green suit and purple cape. He's really quite stunning! Mix that with the excellent work on his mask (the lenses are silver and some of the features of the mask are a metallic yellow) and his necktie and you have a really great looking figure. Compare him to some classic art and I think you'll be quite impressed! 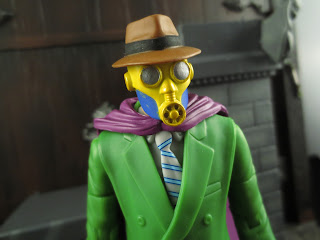 * The sculpt on this figure is just incredible. While Sandman has one of the suited bodies that has been used on a few different characters (there are a couple of different suit jackets Mattel uses) it looks perfect. I love his tie and the cape around his shoulders. Also, that gas mask and hat? Just excellent work. I really dig this guy as he's among the best DCUC figures I've ever seen. 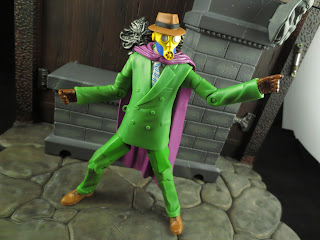 * I know you don't typically think about guys in suits being that articulated but I always do like the articulation on Mattel's suit bodies. Honestly, I think they function and look way better than the standard muscular bodies from DCUC and other related lines. 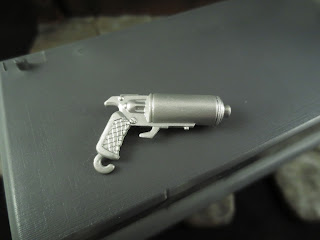 * Of course the Sandman is equipped with his gas gun. It's a nice amalgamation of the various styles of his gun over the years. The cylinder and grip of the pistol look like a more traditional revolver while the front barrel looks more like a cylinder for storing and releasing compressed sleeping gas. It's a nice looking accessory! 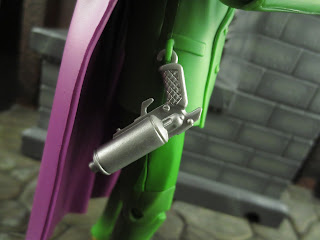 * While a holster would have been cooler, I definitely appreciate the fact that Wesley has some way to store his gas pistol. I kind of wish that Mattel had attempted to have the gun attempted to a tube like some of the Sandman Mystery Theater appearances, although that's not what the original character had. Having a loop to hook the pistol on is kind of cool although probably impractical in real life. But this isn't real life, is it? 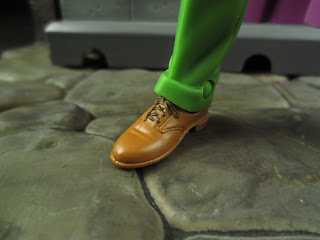 * This might not seem like a big deal but darn! Sandman is sporting some nice shoes! Not only is the sculpt pretty nice but the paintwork is nice, too. They just look really slick. 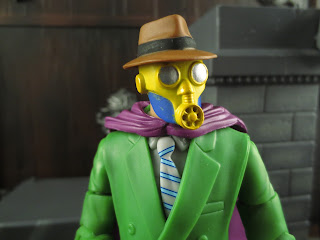 
* I do wish that Sandman had a removable mask or an alternate head. It just seems like a cool feature that would have given the figure a bit more interactivity. 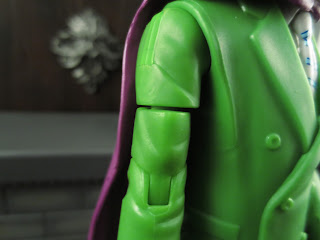 * My only technical complaint with the figure is that there's an odd gap in the swivel joint on Wesley's right bicep. Not sure what the deal is but it looks a bit off. It feels sturdy, though, so I'm not overly concerned about it. 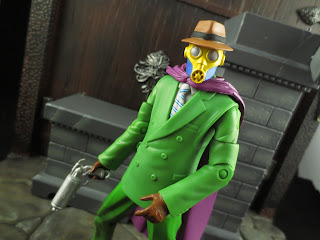 I'm so glad that Mattel is back to releasing DC figures in the DC Comics Multiverse line! While they often do some fairly average work, when they do a great job they really knock it out of the park, as seen here with Sandman. This guy is just an incredibly cool figure. He really manages to capture the Golden Age feel of the character and is just an excellent toy. This guy gets a Great and a 1/2 rating from me. If you're a fan of the character or the Golden Age of comics, make sure to track this guy down. If you don't care about the Collect & Connect piece you can probably track him down for a really good price.


While I own a ton of them, I actually haven't reviewed that many figures in Mattel's DC Universe Classics line. The only others I've reviewed have been OMAC and Raven.
Posted by Barbecue17 at 3/26/2016