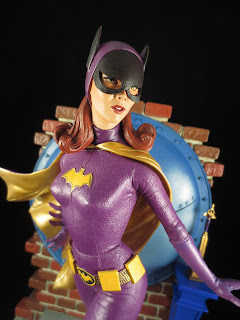 Just like I said in my review of Diamond Select's Premiere Collection Batgirl, we are receiving quite a few Batgirl statues in a very short period. Within the past twelve months we've received the Diamond Select Yvonne Craig Batgirl, Sideshow's Premiere Format Batgirl, the DC Collectibles Black & White Batgirl and the Designer Series Batgirl (I'll be reviewing her within the next week), and Diamond's Femme Fatales BTAS Batgirl and we've still got some more stuff coming out! Today I'm looking at a new Batgirl product based on Yvonne Craig's portrayal of the character from a company I was relatively unfamiliar with until recently: The Batgirl maquette from Tweeterhead. I preordered the Signature Series version of this item last year and was pleased to find that it arrived in the post just a week or so ago. Unfortunately, due to the passing of Ms. Craig last August, Tweeterhead was unable to deliver on these being actually signed by the real-life dominoed dare doll. Still, Tweeterhead did send along a letter to let customers know and there are some extra cool things they should be sending along to us such as a lithograph and a folder of pictures. I'll probably update the review when those arrive. Let's jump on in now and take a look at what might be the definitive Yvonne Craig version of Batgirl in statue form. Join me after the break... 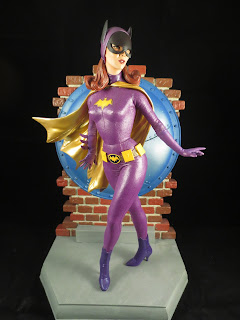 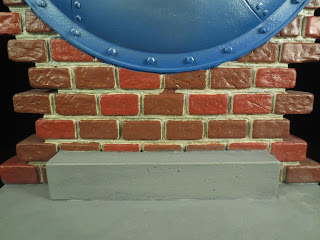 * The bricks are painted in a variety of shades of red and brown and look excellent. I love the pattern and texture on them. Seriously, they might seem like the most minor part of the statue but they really ground the statue and help add something more average looking amidst the colorful comic book craziness. 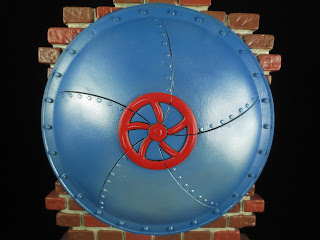 * And here's a closeup of the door that Batgirl uses to reach her motorcycle. For the sake of the statue, Tweeterhead actually sculpted this piece and have it a rounded, actual hatch-like shape rather than leaving it as a simple painted piece like in the show. I think they made the right call here as this is a very high quality display base. 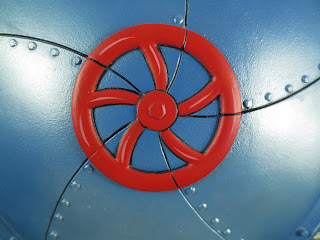 * The paintwork here is really bright and colorful which really matches the background seen in the TV show. Remember that this wasn't a real handle on the show; the door actually opened by splitting into five separate panels and retracting into the wall. 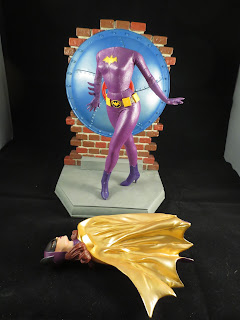 * When you open the package you'll find that Batgirl herself arrives in two pieces: Her body and her head with the cape attached not only does this probably help keep things safer in shipping but it also would make replacing a specific damaged part easier for Tweeterhead. The head and cape simply plugs onto the shoulders while Batgirl's left leg plugs firmly into the base. It's easy to put together and everything fits together well.

* I love the pose here. I've complained about the poses on some of the comic based Batgirl statues as they often seem very uninspired or too plain. Fortunately, the 1966 Batgirl statues have done a great job in crafting great poses and Tweeterhead might be the best out there. Of course, Yvonne Craig was excellent at striking memorable poses while in her batsuit, so companies crafting collectibles have some excellent source material to work with. This statue just has beautiful composition overall. 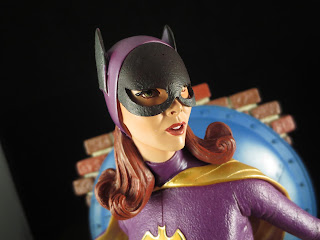 * This is an incredible headsculpt that just perfectly captures Yvonne Craig' likeness. The sculpt, the paint, everything just comes together perfectly. It's also really impressive how Tweeterhead crafted the statue with the cowl actually being a separate piece that gives the statue a much richer, more realistic effect. 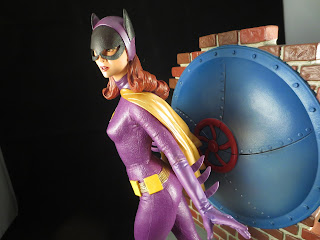 * This Batgirl statue has an incredible figure that captures Yvonne Craig's build during the original TV series really well. Tweeterhead received lots of feedback from Ms. Craig early on in the process of crafting this statue and she seemed to really love how it portrayed her. 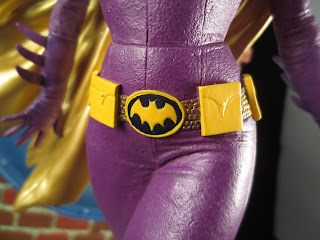 * I love how the belt was handled here. The color on the pouches is much more golden yellow than just plain yellow and the belt looks like it's made from a metal material. There's also the seam at the waist of her costume, a more obscure detail not often seen on every 1966 Batgirl item. I'm quite impressed here. 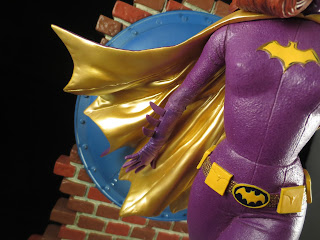 * The cape looks awesome too, doesn't it? It has a really nice shiny texture for the interior and a beautiful, dynamic sculpt. This really looks like a thick, durable material and it adds so much to the pose. 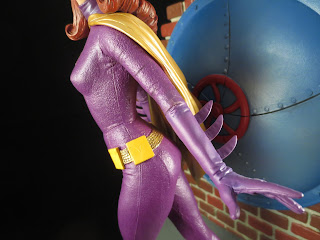 * Trevor Grove has done an excellent job in capturing the subtle wrinkles that make an outfit like this look like actual clothing rather than just paintwork. On Batgirl's gloves and sleeves you can see this level of detail, particularly around the wrists and the elbow. This is stellar work all around. 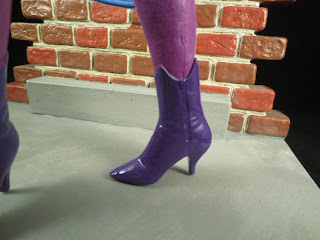 * Here's a closer look at the boots. Again, really solid sculpting and the paintwork nicely differentiates them from the main suit. 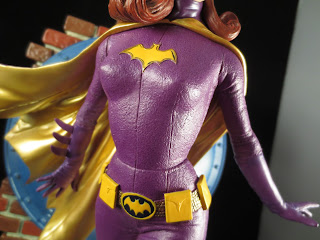 * Tweeterhead's Batgirl doesn't have as shiny of a costume as Diamond's but it has a much nicer texture with some excellent details such as the various seams. 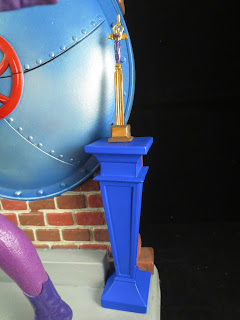 * Here's the Batty Award that Batgirl was given for being the best dressed crime fighter in Gotham City. It's actually two separate pieces held together by magnets: The award itself and the pedestal it rests on. There's also a magnet in the base of the statue that holds the pedestal in place so that it doesn't tip over while on display. This really adds a lot to this display. It's just a fun little extra and seems to show the care and attention to detail Tweeterhead shows to this license. 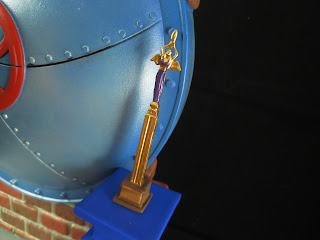 * Here's a closer look at the Batty award. It also has a magnet on the bottom so that it can attach to the base. It's really just a cool looking extra and definitely is one of those fun accessories that you'd never expect to see. 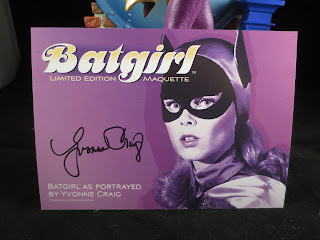 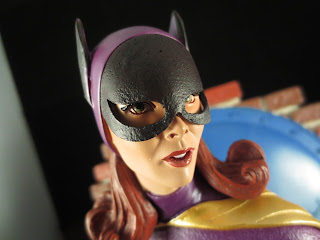 
*Does the mask sit a bit too low on Batgirl's face? I'm not sure. I think it might be a little too low, particularly when it is compared to images on the box. 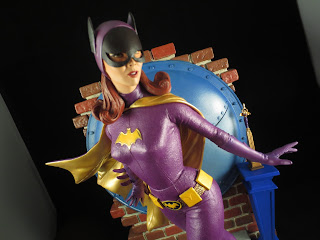 I'm impressed with this one. Really impressed, in fact. The display base, the pose, the paint: Everything just comes together so well. At this point, this is the best representation of Yvonne Craig as Batgirl that we have in any collectible and it's absolutely worth picking up for fans. While I do wish the cowl sat a little different over the eyes and that the suit was perhaps a bit shinier, I'm thrilled by how well this turned out. This is a Great and a 1/2 piece and it's well worth trying to track down for your Batgirl or 1966 Batman TV Series collection.


I have a virtual Batgirl museum right here on Action Figure Barbecue! Check it out!