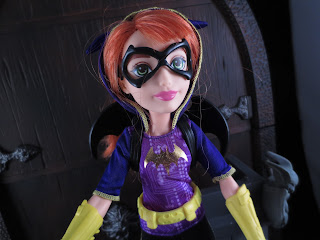 Yesterday I reviewed the 6- inch Batgirl from Mattel's new DC Super Hero Girls series and today I'm looking at the 12-13 inch version of Batgirl. While the 6-inch version is more akin to something like a traditional action figure, this figure is more like a Monster High doll or something. While the 6-inch figures are bit more unique in that they're an action figure line being marketed towards girls, the larger "dolls" are pretty standard for what's available on the market: They feature actual cloth outfits, rooted hair, and some accessories. Of course, the superhero subject matter is a bit more unique, although there have been Barbie versions of DC Superheroes before. Currently the DC Super Hero Girls line is exclusive to Target (that will end this summer) and it will be interesting to see how these do. This is definitely a chance to see if a major company with a first-rate property and a willing distributor can make this concept work. I really don't know how the 6 inch figures will go over but I have a feeling this line will be the real hit. Ready for a closer look at Batgirl from this brand new line? Then join me after the break... 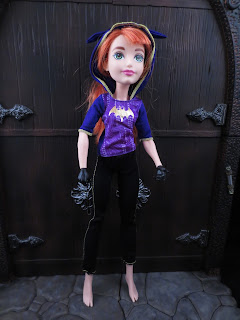 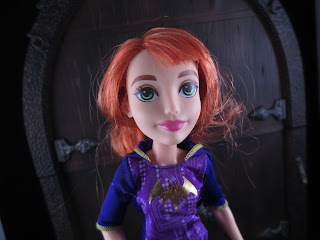 * I'm not much of an expert on dolls, but this seems like a pretty nice sculpt. It's not trying to match any particular version of Barbara Gordon that we've seen before but it certainly hits most of her key features, particularly the real rooted hair. The hair looks nice. If it looks a bit out of sorts, that's my fault. I assume you have to actually brush it, but I don't own any little combs or anything. 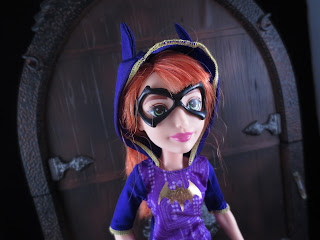 * And here's Babs wearing her Batgirl outfit! The hood simply pulls up (although getting the hair through the hole in the back of the hood is difficult, at least for someone like me with no experience in doing such a thing) and the domino mask-like glasses simply fit over Babs' face. It works really well. It's definitely less super-heroey than the 6 inch figure, but I think it works. I do wish the ears stuck up a bit more, though. 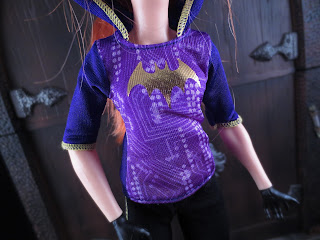 * Batgirl is wearing a purple shirt that is a little bit shiny and is emblazoned with a gold batsymbol on the chest. The hood is permanently attached to the shirt, so this is kind of like a shot sleeved hoodie. It's a nice look, particularly considering that this is a version of Batgirl wearing what she would wear to Super Hero High. 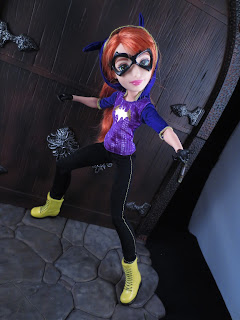 * Batgirl moves pretty well and feels like a really solid figure. Her outfit doesn't seem to hinder her articulation at all and I found that I was able to get her into a good number of action poses. The package proudly proclaims "Dolls stand on their own" to which I would add that I guess she stands on her own as well as any other 12 inch figure I've ever encountered. I'm guessing the package is referencing some fashion dolls which require stands. Just don't get wacky and out Babs in some high kick or jumping poses and expect her to stand on her own. That's not going to happen! I do love the range of motion in some of these joints, particularly the head. Someone in this division of Mattel needs to show their other lines how to get this same great range of motion in a traditional 6 and 7 inch figures' head. 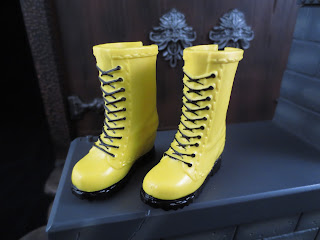 * I mentioned in the review of the 6 inch Batgirl that the outfit for this series seems very strongly inspired by the Cameron Stewart and Babs Tarr designed Batgirl from the current comic., and nowhere is that more apparent than here: This Batgirl also comes with oversized, yellow boots. I love this design element and I'm glad they included it here, too. These are just incredibly cool looking and pretty nicely sculpted and painted. 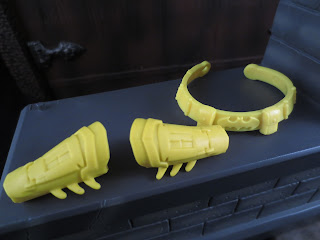 * Here's a look at the belt and gauntlets. They're really nicely sculpted! Also, I have to give credit where credit is due: The blades on the gauntlets are not bent! Woo hoo! Batman and Batgirl figures almost always have problems with bent blades but Mattel did alright here. 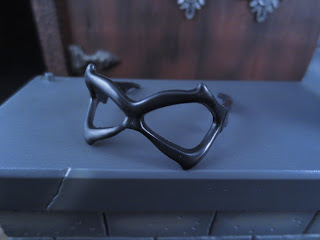 * Here's the glasses. They're actually attached to the head in the package with those little clear rubber bands and one of those plastic cords that holds the tag on a stuffed animal. Use sisters to cut them off, though, and you have a cool, modern domino mask for Batgirl. 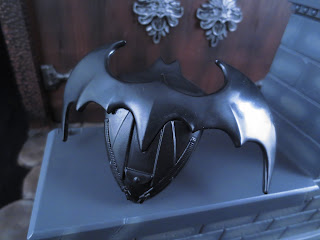 * And here's Batgirl's Batpack. And yes, that's what it's called on the packaging of the 6-inch figure. Since the DC Super Hero Girls are wearing more casual outfits than their typical superhero garb, this backpack marries together the traditional school backpack with Batgirl's cape. It easily fits over her shoulders and does look pretty cool. I wish it opened, though. It would have been cool if it had some extra accessory hidden inside. 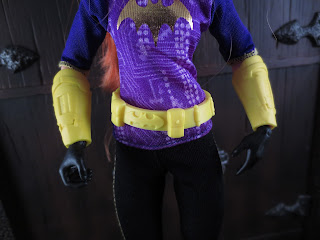 * One of the really nice things about this figure, especially for someone like me who isn't accustomed to dolls or figures in the 12 inch scale and up that use actual fabric outfits, is that the accessories are really easy to put on and take off. The belt snaps on quite easily with a small peg, the wrists pop out of the socket very easily to slide the gauntlets on and off, and the boots actually slide out more easily than typical 1/6th scale boots. 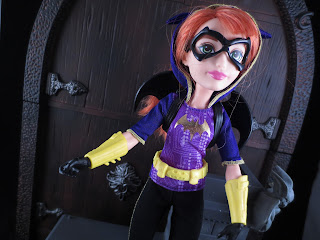 * So, why is Batgirl depicted on the package wielding a golden batarang when she doesn't come with one? Seriously, Batgirl, Batman, and almost any member of the Batfamily really always needs to come with a batarang. It's just a rule. 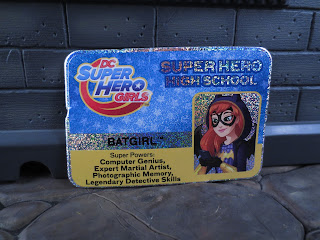 * The packaging makes sure that you realize that the figure includes a student ID card. What it fails to tell you is that the student ID card is a glittery cardboard bio that looked like it was already bent in all of the packages I saw. Would it have broken the budget to laminate this? Of course, if you're a really good Batgirl cosplayer, you might be able to use this to get a discount at a participating movie theater. That's a plus. Still, this is a pretty lame accessory. 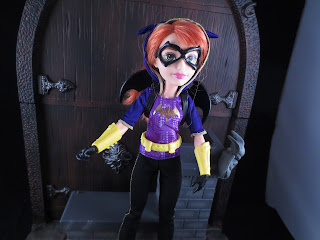 I don't have many figures like this in my collection but I am digging it. While I'm not tempted to pick up anyone else (like I am with the 6 inch line) I do think Mattel could have a hot seller on their hands. Lines like Monster High, Equestria Girls, and other character driven doll lines have done really well lately and, since superheroes are so popular with everyone right now, this is a cool idea. Batgirl here is a Great and a 1/2 figure, particularly considering that she only costs around $20 bucks. You're getting a lot of value. I do want to mention, though, something strange I find with this property. It's interesting to me that the whole concept was to market a superhero line to girls, and yet we still end up with an "everyone is in high school" line. Isn't that what nearly every other girls property does? Instead of letting these ladies be traditional superheroes, just with more female friendly proportions and character selections, it seems that the whole concept also has to be given a more traditional feminine spin. It seems like kind of the opposite of what a line like IamElemental is doing where the characters are still involved in conflict, just like any other superheroes. My thought is that while DC Super Hero Girls is doing some really positive things, and I imagine there will be tons of kids who love these, it still is making a distinction in that boys superhero toys fight crime while girls superhero toys go to school. What are your thoughts on this? I'd love to hear some parents of older girls (my little one is 2 1/2 and while she likes superheroes, she's often preoccupied with whether certain superheroes like toast or not) and some female collectors about their thoughts on this line. Of course, anyone's welcome to chime in on this discussion!


Check out yesterday's review of the 6-inch Batgirl from this same series. I've also reviewed plenty of other Batgirl collectibles, all of which can be found in my virtual Batgirl museum!
Posted by Barbecue17 at 3/10/2016