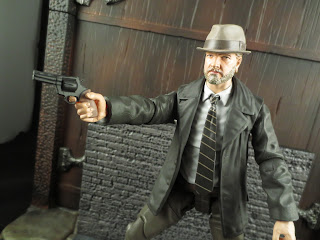 I always forget that Harvey Bullock appeared in the comics for years before crossing over into Batman: The Animated Series because, let's be honest, that's where most of us remember Harvey Bullock from. While he's been a regular part of the comic universe since 1974 and had a major role in Batman: The Animated Series this is the first Harvey Bullock action figure that has been released. Based on the recent TV series Gotham (which I haven't watched yet) this version of Bullock is based on Donal Logue's interpretation of the character. While I can't speak much about Logue's interpretation of Bullock yet I definitely think he has the look for the detective. Harvey's from series 2 of Diamond Select's Gotham line along with Alfred Pennyworth and Edward Nygma. Ready for a closer look at the first toy of one of Gotham's top cops? Then join me after the break... 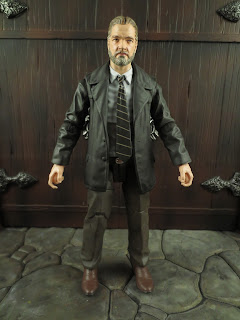 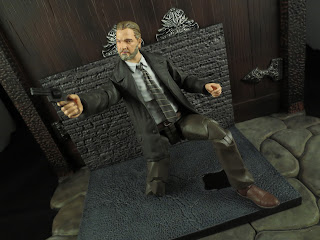 
*I'm really impressed by Harvey's articulation! Not only does he feel insanely durable and well put together but all of his joints have an incredible range of motion. Diamond has done some really excellent work here. 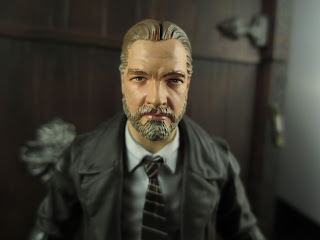 * This is a pretty good sculpt. I definitely can see Donal Logue in it (although it also kind of looks like the late Philip Seymour Hoffman, too). The sculpt is very clean and the paint work is fairly detailed. There's some great work on the hair and beard, much better than average. 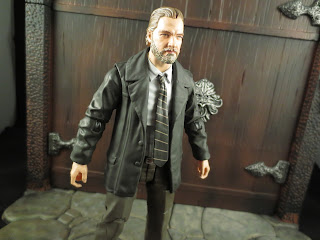 * Harvey's wearing an excellent rumpled, outfit. It's a variety of darker shades of brown with a white dress shirt and a striped tie and it works perfectly for the character. He definitely looks like a cop or a private eye out of an old pulp novel or a film noir classic. The coat and the tie are made out of more pliable rubber so that they hang nicely and give the outfit a more truly layered look. 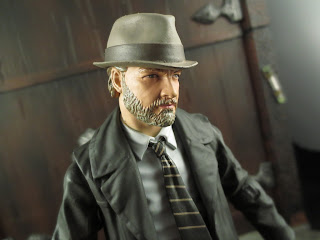 * I love Harvey's hat. It's made from a rubbery, flexible plastic and fits perfectly on his head. It's a great looking fedora that fits the character perfectly. 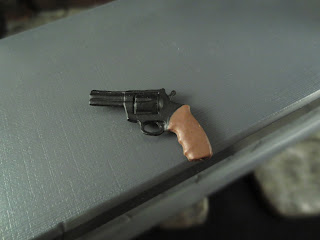 * This is definitely not a perfect representation of Harvey Bullock's Smith & Wesson Model 10 but it works well enough for the figure. The paint applications are decent, though. 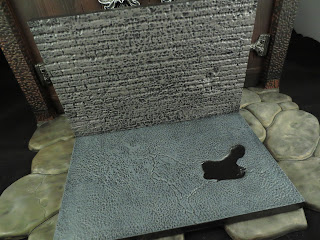 *This base doesn't look so bad, does it? Well, it isn't, but it's missing something. Take a look at this picture (which appears on the packaging, too) and see if you can spot the difference. Notice anything missing? How about an entire friggin' dumpster! Yup, again Diamond Select has made last minute changes except this time they didn't replace them with anything or improve the figure. Another figure is getting the dumpster in the future but if you pre-ordered Harvey then you're out of luck. 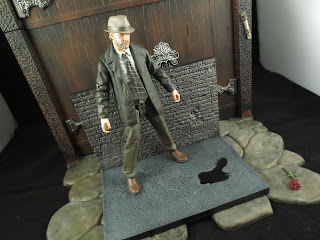 *There second problem with the alley way backdrop is that it's just two small. I really wish it were a bit taller so that it could be useful on it's own. I know it connects sideways to Gordon's base but I don't know if anyone else has a part that extends the wall. It looks really strange that this only goes up to Harvey's chest. 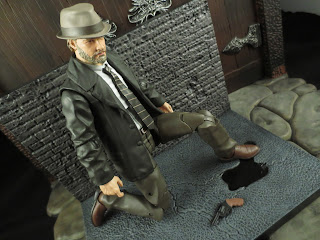 This is my first figure from the Gotham line and I have to say that I'm really pleased with the figure itself. Harvey looks incredible and is really well articulated. Diamond did a great job here. The only disappointment I have is the fact that they left out an accessory that seemed pretty heavily advertised. I had pre-ordered Harvey quite a few months back and thus I just assumed he'd have the dumpster with him (it's on the package, after all). I don't buy that many figures from Diamond Select but it's crazy that the last two I've purchased (Harvey and Lucy Westenra) have both had pretty extensive pieces that were dropped at the last minute. Bizarre, huh? Anyways, Det. Harvey Bullock is a Great figure, I'm just disappointed that the dumpster is missing.