As I mentioned in the last installment of Barbecue's Bonfire I managed to pick up a few of the action figures from Mattel's new super hero line targeted at girls: DC Super Hero Girls. Currently a Target exclusive until this summer, DC Super Hero Girls is intended to produce a line of superhero action figures that are geared towards girls and which produce a positive body image. Currently the line consists of six 6-inch figures, six 13-inch figures, and some various roleplay items. While targeting an action figure line towards girls certainly isn't a new idea, it is an idea that's really gaining some popularity. IamElemental by Rebel Elements has based their entire company off of this idea and it seems to be working for them. Hasbro also has a current line of My Little Pony Equastria Girls figures that are built like traditional figures rather than the standard ponies or dolls. Of course, Hasbro and Mattel are much larger companies and it will be interesting to see how these projects fare for them. Honestly, what I find interesting about DC Super Hero Girls is that overall these really aren't that different from most other superhero toys targeted more towards kids than collectors with the exception that the builds are less traditionally "comic booky" and more slim and athletic. I'm also intrigued that the superhero line targeted towards girls isn't a standard superhero line based around crime fighters; instead, these are supposed to be students at Super Hero High. Today I'm looking at the 6-inch Batgirl figure who wears an outfit that seems to be heavily inspired by the Babs Tarr and Cameron Stewart Batgirl outfit used in the current run of the comic. Ready for a closer look? Then join me after the break... 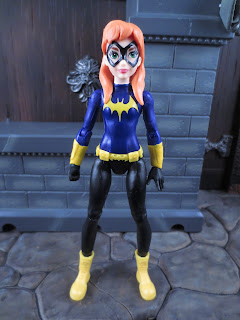 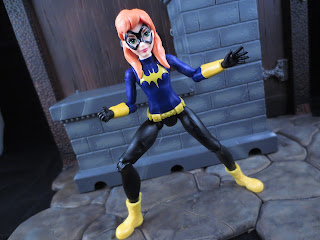 *These are definitely action figures and they're packed with a fair amount of articulation. Certainly not as much as a DC Comics Multiverse or Marvel Legends figure, but certainly more than the 5 poa figures we're seeing dominate many lines these days. What's nice is that these are also solid, well constructed figures. None of the joints feel frail or fragile, which is important. These are made for being played with as rough as any other kid-oriented action figures. 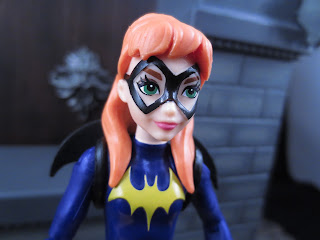 * This is a pretty good Batgirl headsculpt. She's wearing a simpler, more stylized domino mask rather than her cowl, but it works for the theme of this line. Babs' hair is appropriately nice and red and is actually separately sculpted from the headsculpt. I like the headsculpt, too. It's not overly expressive, but not passive either. It's a good headsculpt that could really convey a wide variety of emotions. Whether this Batgirl is out fighting crime or hanging with her friends at Super Hero High, this look for the character works. 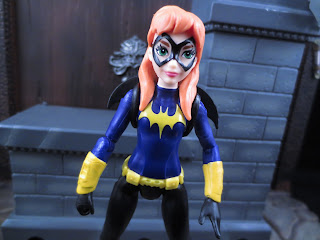 * As I mentioned in the intro, I definitely can see the influence of Babs Tarr and Cameron Stewart's Batgirl design on this figure. This is a much less traditional superhero outfit and utilizes the same large yellow bat logo and purple jacket that really define that suit. The yellow gauntlets are also reminiscent of the current costume's yellow gloves. The "Batgirl of Burnside" costume is a great look and I'm glad to see that people are really latching onto it and using it for mainstream stuff. 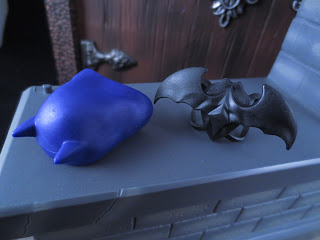 * Batgirl does come with two accessories which help to create her full look: A hood and a "Batpack." And yes, that's what the package calls it. The hood is a plastic piece that simply slips over her head and actually stays on really, really well. I was afraid it would slip off too easily, but it doesn't. The Batpack is a simple backpack sculpted with bat wings that Babs wears on her pack. It looks cool and kind of mimics her traditional cape in a more casual, functional way. 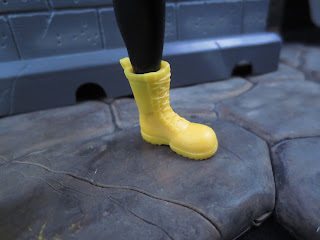 * Further showing off that this figure is inspired by Tarr and Stewart's Batgirl design, Babs is wearing thick, chunky yellow boots. I love this! It's one of my favorite design elements from that costume and they look great here, too. They also ensure that Batgirl can stand up well on her own in a number of poses. 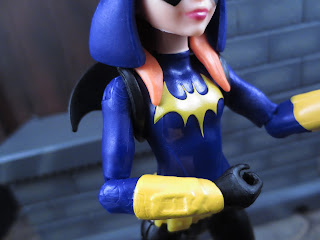 * I do have a few negatives, but they're all kind of small. First, there are some weird textures on her arms where the plastic looks rough and scratched.

* Secondly, while the Batpack is a cool looking accessory, I'm a little concerned that the straps might not hold up to kids pulling this thing on and off. 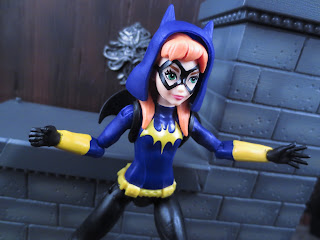 While I'm a collector of almost all things Batgirl, I totally can acknowledge that I'm not the target audience for this figure. This one's definitely made for the kids (girls in particular) and I imagine they'd have a pretty good time with these. Honestly, I'm contemplating picking a set of these up for my little one as well. While she's only 2 and a 1/2, she's taking after her dad and is already gravitating towards action figures at a young age. While she's obsessed with the Hulk, Batman, and Chewbacca, it's nice to be able to have some female action figures to offer her, too. She loves Imaginext, but that line is pretty heavily male dominated except for the DC subline. I was thrilled that with the Star Wars Galactic Heroes, we recently found the Rey and Captain Phasma two-pack since she has some more females to play with (she loves Rey now since my wife dressed like Rey for Halloween). I remember how figures like Barbecue, Shockwave, and my General Hawk v2 from G.I. Joe was often my action figure surrogate in my adventures, and I remember how interesting I found it when figures like Tim Murphy from Jurassic Park were released as he was just a regular looking kid, something I could easily identify with. Batgirl here is a solid, well made toy, and she gets a Great rating from me. And, if she helps some little girl realize that she has a place in the world of crime fighting, toy collecting, comic books, and everything else, than that's great too.

Seriously, I have a whole collection of Batgirl stuff. Check it out in my virtual Batgirl museum!
Posted by Barbecue17 at 3/09/2016