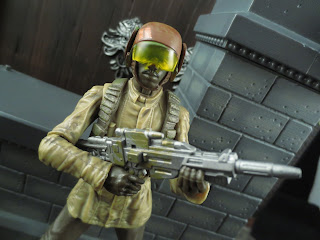 Sometimes, despite being a really good figure, a figure just seems a bit boring. That's how I feel about the Resistance Trooper. He's a good figure but there's just something about him that seems a bit...dull maybe? I'm not sure if it's the coloring or the costume design itself, but I find it hard to get enthused about this guy. There's something about him that just doesn't scream Star Wars to me. Anyways, it's a shame because Hasbro did a pretty nice job on this figure. The guy portrayed here is not only in the Visual Dictionary for The Force Awakens but he also appears in other tie-in items such as various coloring books. Seriously, my two year old has an Episode VII coloring book and I've colored this guy once or twice. It is cool, though, that Hasbro gave us a figure of an actual actor from the film as I'm sure someday he'll have a cool backstory of and role of his own. This is Star Wars, after all. Ready for a closer look at the someday "soon to to be famous and have an extensive backstory" Resistance Trooper? Then join me after the break... 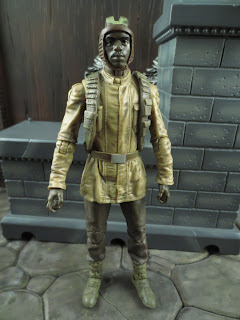 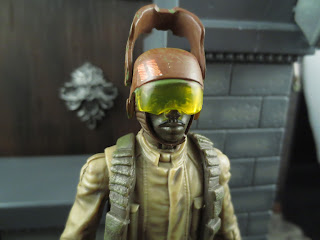 * The Resistance Trooper's helmet is what will immediately catch your eye. Well, his goggles in particular. They're cast in an almost neon, translucent yellow, but they look great. They're definitely not banana lenses, if that's what you're afraid of. The face sculpt of the Trooper underneath is excellent. It's amazing how well Hasbro captured the likeness of a background character like this guy but yet often struggles with the likenesses of the main cast. 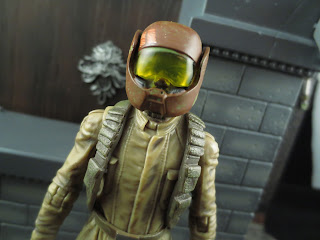 * The coolest feature of the helmet is that the armored face guard can swing down and lock into place, providing better protection in battle. It kind of snaps into place and looks really good. It definitely goes a long way towards making the Resistance Trooper a more interesting figure. 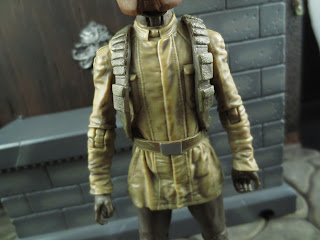 * The body and paintwork on this guy are really well done. As I said above, the Resistance Trooper doesn't have he most exciting design, but Hasbro did a great job with what they had. His longer coat has some excellent details and a nice wash that gives is a rugged, worn appearance. I like his shoulder straps, too. They're a separate but non-removable piece. A backpack would have looked awesome on this figure, but no such luck. Seeing this guy does give me some more confidence that Hasbro could do an awesome job on a 6 inch G.I. Joe line if they ever got around to it. 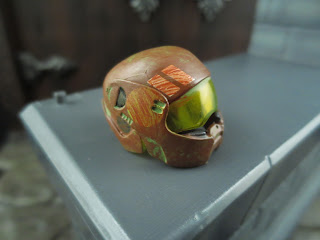 * Here's a closer look at the helmet. The paintwork on it really is pretty incredible. There are apparently two versions of the helmet: This one and one that is more of a greenish color. As you might be wondering, is the Resistance Trooper's helmet really removable? Good question. I don't think this is an intended feature but when I received mine the helmet was loose and can go back on just fine. If you want to use the helmet for something else, now you have the option. 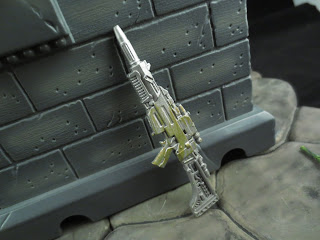 * The only weapon the Resistance Trooper comes armed with is the EL-16HFE blaster rifle. It's the same rifle that came with the Target exclusive Poe Dameron and seems to be a favorite of the Resistance. I love the design of this blaster and Hasbro has done it justice, including giving it a nice weathered appearance. Oh, and what to know what the HFE stands for in the blaster's name? Heavy Field Edition, as opposed to the standard version of the blaster which came with Finn. 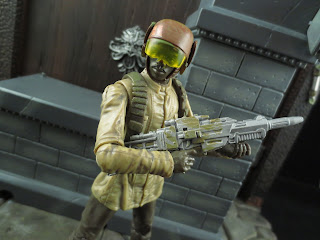 * While most of the articulation on this guy is on par with the other figures in this series, it's a real bummer that he can't hold his rifle correctly. The range of motion on his shoulders and elbows prevents him from attaining a proper two-handed firing pose. That's pretty much the only thin this guy needed to be able to do, right? Shoot at the First Order? 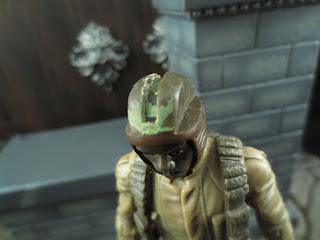 * I'm not really considering this a negative since I don't think the helmet was really intended to be removed, but here's what the Trooper's head looks like without the helmet. He 's wearing a leather looking hood that has some nice design elements on the sides but you can also see the top of the head is molded to hold the helmet. There was some sort of glue in place but it must not have held the helmet on too tightly (the helmet stays on the head just fine by itself, though). 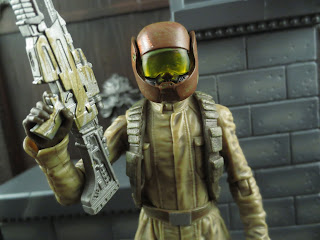 You know what? While I started off feeling that this guy was kind of dull, the more time I spent posing him and photographing him, the more I've come to like him. His costume design might be a bit basic but it's certainly not bad. You know, he's know Rebel Fleet Trooper or anything, but he's still a decent army builder figure (even though he's based on a specific actor; does anyone know the guy's name?). While the standard Star Wars Black articulation makes it tough for this guy to convincingly wield his larger rifle, overall he's a pretty solid addition to the line. I'd give him a Good and a 1/2 rating. He seems to be fairly easy to find right now, so you shouldn't have trouble snagging him.


I haven't reviewed any other Resistance Troopers, but I have reviewed plenty of other figures in Star Wars: The Black Series, including: