Wrapping Up 2021: Arrow ATV from Final Faction by Greenbrier International 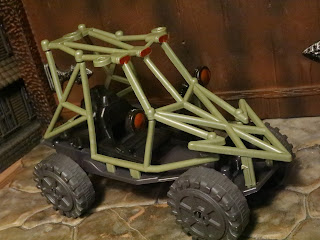 Have you heard about Final Faction? Over the next couple of days I'm going to be talking about Final Faction, one of the most interesting toylines of the past few years. The first figures were released at the end of 2020 but I didn't pick them up until last year and just never got around to reviewing them. In December some figures and a vehicle from the second series dropped so I'm finally giving the line some attention on Action Figure Barbecue. For those of you not familiar with Final Faction, it's a 1/18th scaled toyline about the special operatives of Alpha Team 1 defending Earth from the Kharn, an Alien collective intent on plundering Earth's natural resources in the year 2050. OK, that's cool, so what's the claim to fame of this line? They're exclusive to Dollar Tree and they cost $1 each. Yes, the figures are $1. There are also currently six very cool accessory packs with extra gear for the humans and the aliens. Guess how much those cost? Yup, $1. Today I'm checking out the first vehicle in the line, the Arrow ATV. It's a 1/18th scaled ATV that the figures can ride in. Guess what? It also costs $1. While just being cheap isn't a quality in and of itself I think there's a lot of creativity and innovation in Final Faction. The team behind it is clearly very passionate (they have a very active Instagram page and regulalrly interact with the fan community) and are doing some neat stuff. In a world where Hasbro has started charging an extra $10 bucks because Boba Fett's armor is "deluxe" Final Faction is kind of refreshing.
The Arrow ATV is the first vehicle in the line and is a small transport for the heroic Alpha Team 1 members. It's basic, yeah, but only because there's an accessory pack that allows you to arm it with additional weapons and gear for another buck. That review is next but for now let's look at the basic Arrow ATV after the break... 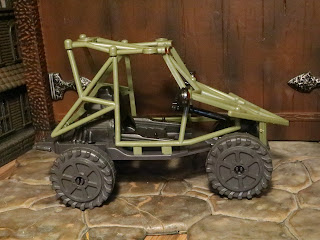 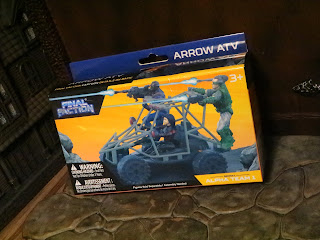 The Packaging:
* While the standard figures and accessory packs come packed on simple blister cards both the Arrow ATV and the Weapons and Armor kit come in a small box. There's a slightly exaggerated image on the front and stats about the vehicle on the back. 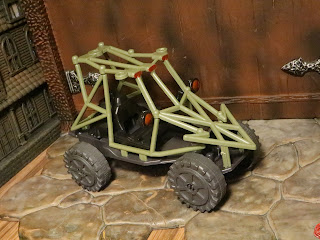 The Positives:
* Here's the Arrow ATV. it's an easy build (instructions are included) and is made from around 12 or so pieces. It's lightweight but it doesn't feel brittle. There's very little paint (just the red lights on the top of the frame and the headlights on the side) but the pieces come in a few different colors so you're getting a very military looking piece of equipment with black, gray, and green). 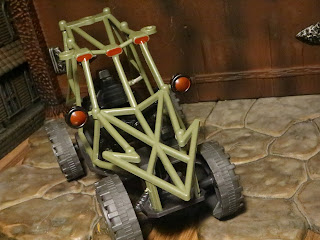 * The front of the Arrow ATV is pretty cool as the bars of the frame do actually look like an arrow. It's a neat little design detail. 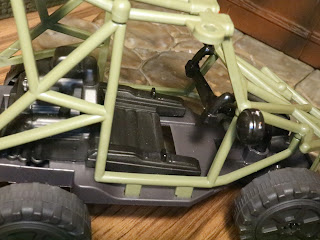 * The cockpit can hold most of the Alpha Team 1 figures and there steering controls that most figures can grab onto as well which helps keep them in the vehicle. 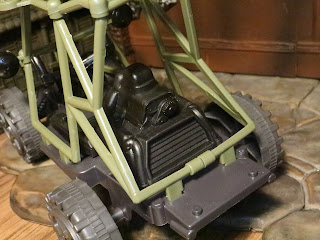 * There's a stand on the back where a figure can hop on as well as an exposed engine. The detail is a bit soft but it's there. 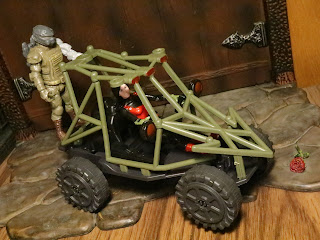 * Here's a shot of some figures on the Arrow ATV. They're ready to roll against the Kharn! 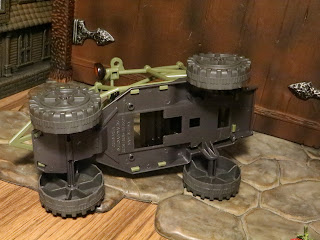 The Negatives:
* The Arrow isn't brittle nor does it feel overly fragile or anything. it is very lightweight, though. Picking this up you realize you're messing around with something made on a budget. Hollow tires, no axles, etc. It's just the nature of this being a budget line here but it does warrant repeating just to make it clear. 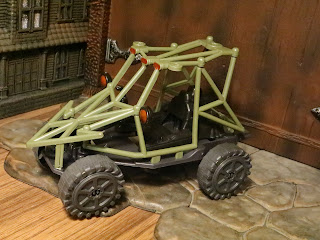 So, what do you get from a $1 dollar ATV? It looks pretty cool, it rolls, and it holds a couple figures. What more could you expect? It's not the greatest vehicle in the world but it's pretty impressive that Greenbrier International and the Final Faction team pulled this off. It's a Good and a 1/2 vehicle on its own and I could see this being very popular with 1/18th scale collectors of G.I. Joe and other military lines as the basis for customizing projects. Of course, once you add on the Weapons and Armor Kit you get something pretty impressive. Check back soon for a look at the Arrow ATV all armored up.
This is the first version of the Arrow ATV I've reviewed.
Posted by Barbecue17 at 1/13/2022