Wrapping Up 2021: Spc. Scope from Final Faction by Greenbrier International 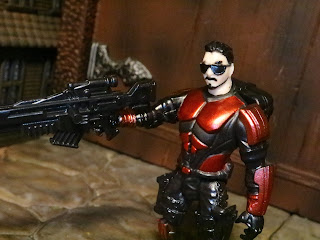 I'm making my way through the 2021 Final Faction releases and next up is Spc. Scope from Alpha Team 1. Specialist Scope is the sniper of Alpha Team 1 and the brother of Specialist Shift from series 1. He's a cool figure and one of the neatest looking humans in the line thanks to his slick metallic red armor. If you haven't read any of my other reviews of this series yet keep in mind that these are exclusive to Dollar Tree and only cost $1 a figure. Let's take a look at Specialist Scope after the break... 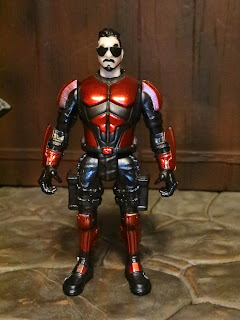 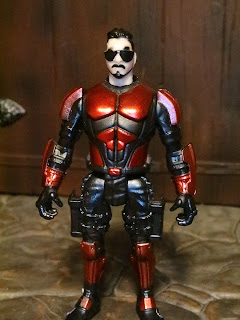 The Positives:
* I really like the look of Spc. Scope in his black and metallic red body armor. It's pretty slick looking and there's a nice amount of detail on the figure that makes it look like advanced body armor. The paint job is simple, sure, but the minimal paint applications don't take away from Scope's appearance. 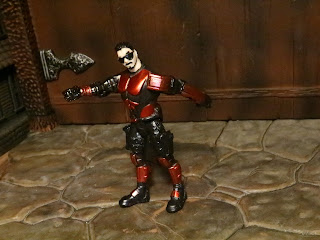 * These are simple figures with 5 points of articulation. Sure, more would be better, but you know what you're getting here and aren't paying much for it. They feel durable enough and  haven't had any issues with them. 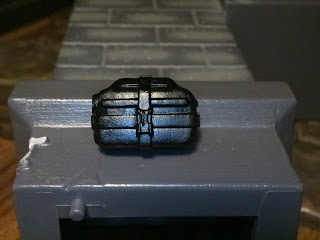 * Scope comes with a very nice assortment of accessories. First up is his simple backpack. It's black and has a little bit of detail and a little buckle on it. It plugs into his back easily and looks pretty neat. 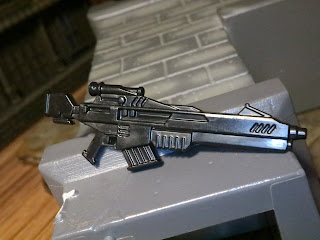 * Scope's rifle is named Stormwatch and it's apparently capable of firing multiple types of rounds. This is a really nice looking rifle that looks a little futuristic (Final Faction takes place in 2050) but still realistic enough that it could pass for a modern firearm, too. There's some nice sharp detail here. It's honestly really good. 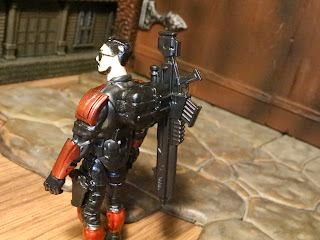 * Specialist Scope takes a cue from the G.I. Joe Clasified Series as he can carry all of his weapons and still have his hands free. His rifle can actually plug into a port on his backpack for easy carrying. 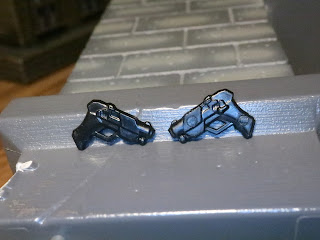 * When things get up close and personal Scope can pull out his twin pistols and deliver short ranged pain. 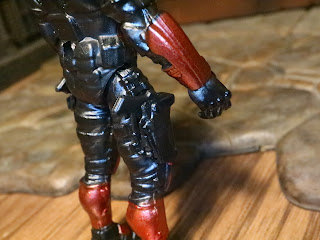 * He can even carry both pistols in the holsters molded to his legs. They stay in pretty well, too. 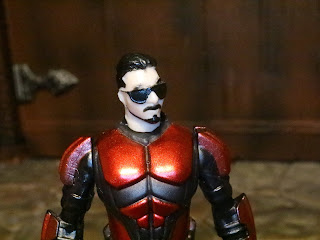 * If there's a part of the Final Faction line that shows off its budget nature it's the headsculpts. They're not abysmal or anything but they're definitely the weakest part of the line. Take Scope; he's not bad and there is some personality here with his cool facial hair, slicked back hair, and sunglasses (my daughter thinks he looks like Tony Stark) but the soft mold, missing eyebrow paint app, and simple paint scheme weakens things. 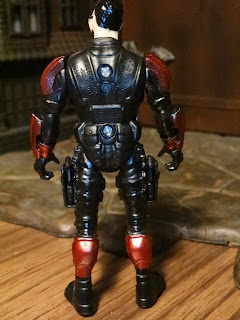 * The back of the figure has no paint apps whatsoever. It's clear that there should be some red armor back here but clearly it was left off as a cost cutting measure. I've seen plenty of more expensive figures do this same thing but it's no less irritating. 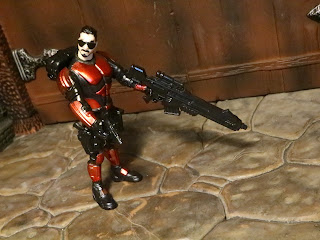 Specialist Scope is pretty cool. Nice paint scheme, fantastic accessories, and the ability to carry all of his accessories at once is pretty impressive. I really am fascinated by this line and I'm excited to see how it continues to develop. There's some cool characterization of these characters and Scope is pretty neat and fulfills a distinct role in Alpha Team 1, so that's a lot of fun. I've got one more figure to review for the 2021 releases so stay tuned. You've not heard the end of the Final Faction...