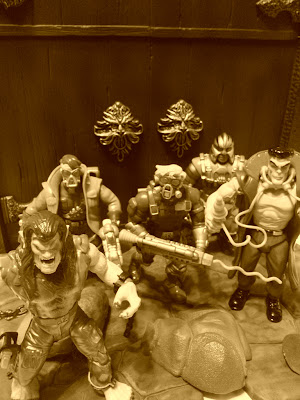 Released in 1994 by Playmates Toys, Monster Force was a modest toy line centered on a group of monster hunters who battled the classic Universal Monsters.  It was a nice line for the time, but only included seven action figures and doesn't seem to be too in demand these days.  When I checked the internet for Monster Force fan sites, the only one I found was last updated sometime in 2004.  There was also a cartoon series, but I don't remember it; it only ran for 13 episodes.  Unlike most of the things I've written about in Show & Tell so far, I really don't have too much of a personal attachment to the Monster Force.  I only owned three of the figures as a kid and I probably got those marked down at Target (Lance, Tripp, and Dracula, if you're wondering).  Still, I've always had a personal attachment to paranormal detectives and monster hunters of anytime.  While my first action figure was a G.I. Joe, the first fictional universe I remember which enthralled me was Ghostbusters.  More paranormal goodness after the break....


Despite being a bit of a scaredy kid, I was always enthralled by anyone who investigated and fought against the evil forces of the undead or the monstrous.  Whether it was the Ghostbusters, Scooby Doo and the gang, Filmation's Ghostbusters, the Three Stooges, or even Sherman Hemsley in the 1987 film "Ghost Fever", I was captivated by those brave souls who went up against the undead.  In the years since, I've become a bit braver and have also reveled in the exploits of Hellboy and the BPRD, Sir Edward Grey, Cassie Hack, the Justice League Dark, the Lego Monster Force, John Constantine, and others who have dedicated their lives to eradicating evil wherever it may lurk.  I guess that's where Monster Force fits in.  I would have only been about 11 or so when the line came out and probably because it disappeared rather quickly I just didn't have the time to grow attached to it.  The only real memory I have of the line is begging my mother to buy me Doc Reed since we shared a name (she didn't).  I wouldn't have even thought about this line if it weren't for an interview conducted by Poe Ghostal with sculptor Scott Hensey who worked on the line.  As soon as I was reminded of the line, a short trip to E-bay netted me the entire series figures at a very reasonable price. The figures all come in around 5 inches and come with bases which give them a nice dioramic atmosphere when displayed.  Set back and enjoy one of the lesser known lines of the mid 90's: Monster Force! 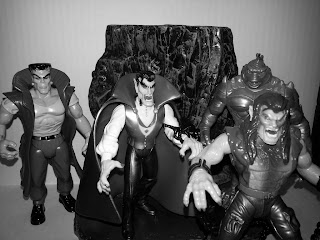 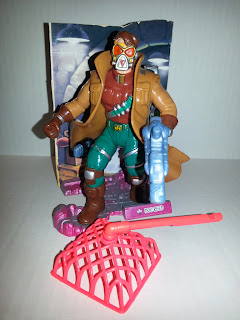 The leader of the Monster Force, Doc has the cool brown trench coat vibe going for him, kind of like Gambit or the Tenth Doctor.   He's rather preposed in a bit of an action stance, which isn't uncommon for figures from this era, but has some really cool details.  I love the translucent plastic used on his goggles.  Doc Reed has swivel joints at the thighs, waist, shoulders, neck, and wrists.  He comes equipped with a cool short rifle weapon that attaches to his removable backpack, a cool cannon with a firing "energy net," and a ComPad Unit with holster. The ComPad looks kind of like a bulkier smart phone and the package states that it has a CD-Rom computer built into it. High Tech!  The energy net is kind of weird, though, as it looks like a bizarre pink basket and fires at an odd angle.  Doc Reed's base looks like a stone floor with small piles of rubble.  It has a hole to store the cannon and a slot which holds the cardboard backdrop of what may be the Monster Force labs. 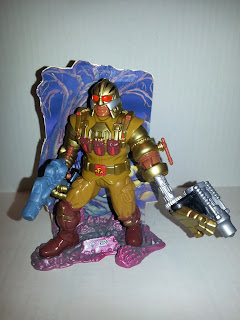 Decked out in a cool battle suit and adorned with pouches, pockets, and bits and armored sections, Tripp Hansen is apparently the martial arts master of the Monster Force.  For some reason, his outfit kind of reminds me of Eddie from Filmation's Ghostbusters. Tripp comes with the same cool short rifle, translucent goggles, and ComPad that Doc Reed came with (although the package says his has a VCR in it, too). His unique accessories include a blaster that mounts on his forearm, an extending left hand, and a small gun barrel that rotates on his left bicep.  He looks really well armored and is certainly well armed.  He mostly has the same articulation as Doc Reed, but his head doesn't turn very well due to the shape of his helmet.  His base is a cool graveyard scene with a grave, skeletal arm, and a slot to display the spooky graveyard backdrop. 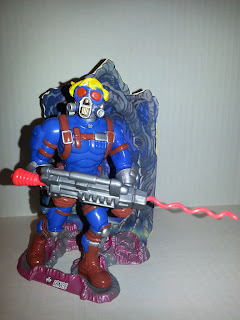 Decked out in a blue jumpsuit and a gas mask, only Lance's wavy blonde hair can be seen.  He's extremely pre-posed in a running position and definitely needs his stand to stay upright.  His stand looks like a forest base complete with tree roots and a big snake and is complete with a spooky forest backdrop.  Lance was my favorite as a kid, however, because not only does he have his ComPad with holster, but he also has a "Proto neutralizer."  That's the silver gun he holding with the pink beam that can move back and forth and swivel, very reminiscent of the proton streams on the original Ghostbusters figures.  The gun even snaps onto his backpack. He's a cool looking figure, but odd in his functionality. He features the same 8 points of articulation as his fellow monster forcers. 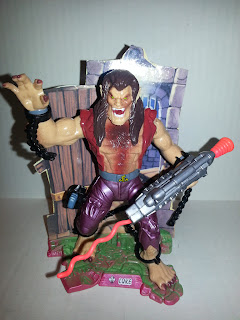 Luke stands out as looking much more monstrous than the other Monster Force members.  He's infected with lycanthropy, but seems to be able to control it to an extent, giving him cool werewolf powers.  Luke's base is the floor of a containment area with a crumpled sign and a clasp for his chains. His backdrop shows the locking cell where Luke must spend his wildest nights.  He has a similar Proto Neutralizer to Lance and the same ComPad as everyone else (it probably contains a cassette deck with an Ace of Base tape in it).  He also has breakable chains on his arms (they're removable) and removable leg shackles. While his head doesn't turn, his shoulders are ball jointed, which is pretty cool.  I also really like his shiny purple pants. 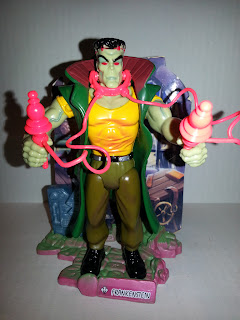 This is a very 90's Frankenstein.  While the figure shown on the back of the card looks to have Caucasian skin, the figure actually has the traditional pale green skin of most Frankenstein representations. In addition to his pants and two-toned shirt, he has some kind of weird short sleeved cape with a popped collar.  His base and backdrop seem to represent a mad scientists lab.  His articulation is standard for the line with the exception that his right arm is ball jointed and features a spring loaded "monster pounding arm." He comes with two electrodes and a device to attach them to his neck or a break apart charging unit that they can be stored in.  I honestly didn't realize he was a member of the Monster Force until recently. I always thought he was a bad guy.


The Creatures of the Night

Creature from the Black Lagoon 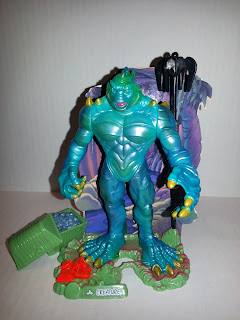 Probably the coolest figure in the line, the Creature is also the largest. He's a beast.  He features a really nice green and blue paint job that has a opalescent finish and lots of cool fins on his back and arms. Lots of spikes too, and check out his webbed toes and hands!  He doesn't have any wrist or waist articulation, however. His base is a murky cavern floor which is accented by a treasure chest filled with removable coins and jewels. He also has a massive grappling hook launcher that can plug into the base.  This is really a very cool looking figure with a nice head sculpt. 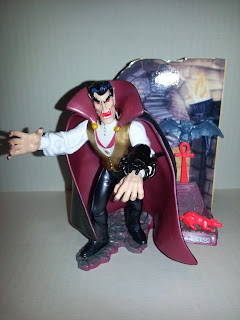 I seem to remember this guy being a bit of a peg warmer back in the day. Can anyone verify that? Anyways, he's a decent, fairly traditional Dracula figure (more Christopher Lee than Bela Lugosi or Gary Oldman).  His long nails are kind of cool and his teeth look sharp, but man, doesn't his hair kind of remind you of Mitt Romney's?  Anyways, his base represents Dracula's crypt and features a tombstone that can hold his magical ankh.  The bat can clasp onto the ankh, the scarab can attach to Dracula's wrist, and the neon pink rat (why?) can sit wherever he likes. 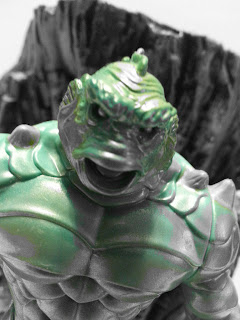 Overall, Monster Force was a cool little line that seems like it might of had potential. Perhaps it needed more monsters and characters to make it a success?  Some research revealed that Playmates had plans for 2 more figures: Shelley Frank, the Monster Fighters flying psychic, and HoTep the mummy, one of the main baddies.  There were also some vehicles planned, but those never happened either.  While those are now left as footnotes in history, I'm still glad to have finally completed this line. They may not be the biggest or the best, but if the BPRD is busy, the Ghostbusters are sick, and the Justice League Dark are out to lunch, you can always count on the Monster Force.

*Update* Check out the Flickr profile of cmdrkoenig67.  He has made some extremely cool customs of Shelley Frank, HoTep, and even his own imagining of what the Invisible Man might have looked like if introduced into Monster Force.  Thanks, Commander!
Posted by Barbecue17 at 11/23/2014