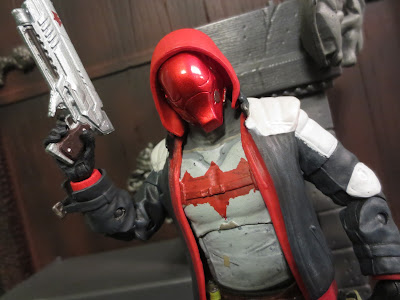 It's been awhile since I last preordered a video game from GameStop but I did preorder an action figure from them last fall and it has finally arrived! This Red Hood is exclusive to GameStop stores. Yes, with the upcoming Batman: Arkham Knight video game less than a month away it only makes sense that DC Collectibles would be releasing a new series of Batman: Arkham Knight action figures for collectors to scoop up. The Arkham-verse is quite possibly my favorite incarnation of the Batman mythos to date and I'm thrilled that the Red Hood is finally making an entrance in this series. I can't say with 100% certainty but I highly suspect and have every reason to believe that this is the Jason Todd version of the character (there have been a few different folks to wear red hoods in Batman lore). Initially I thought that the Arkham Knight character would be Jason Todd but it seems that the new titular antagonist is a completely new character. Awesome! Anyways, Red Hood is one of those Batman characters who hasn't been made into an action figures too many times yet so it's cool to see him this early in the Arkham Knight series. Ready for a closer look at the GameStop exclusive Red Hood? Then join me after the break... 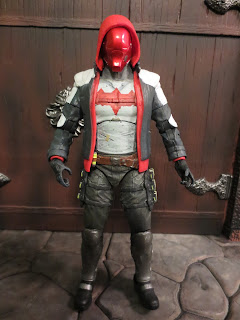 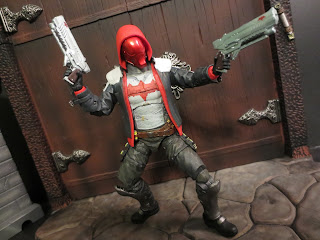 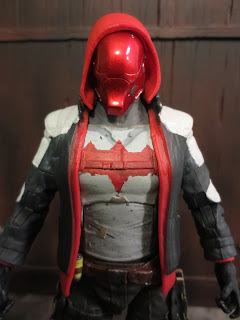 *Have I ever said how much I love the aesthetics of the Arkham-verse from the video games? It's the perfect mixture of over-the-top comic book styled designs with some gritty, real world sensibilities. Red Hood has the recognizable details of his comic counterpart (a red armored helmet), body armor, two pistols, and a jacket) but they're nicely redesigned. He's not any less elaborate or "toned down" but he just has a different aesthetic that works. I love the color selection and the jacket he's wearing. The bat emblem on his chest looks great, too. It's very crudely applied and the armor is covered with damage applied but I love the design. If this is indeed Jason Todd (which I'm assuming it is) this seems to indicate he's an ally to Batman. Since this is a bit hastily painted on, however, is this perhaps evidence that he joins the Bat-family during the events of Arkham Knight? 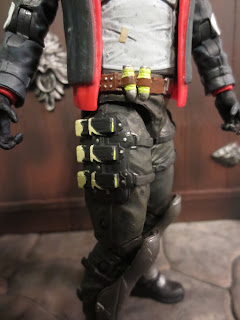 *Red Hood has some awesome details. I love that he has extra magazines for his pistols on his thighs. He also has a couple of larger projectiles tucked into loops on the front and rear of his belt. The little extras on these figures really make them rather interesting to look at. The sculpting credit on this figure is attributed to Gentle Giant so it's possible that parts of the figure come from the digital in-game models. 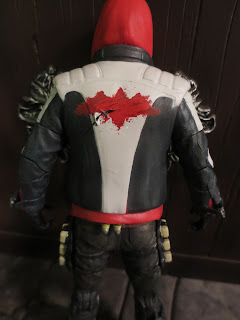 *The back looks cool, too. Check out the smeared look of the paint and the hastily stitched together tear on the back of the jacket? I really like this! The jacket is made of a softer material and looks nice fitting over Red Hood's torso. 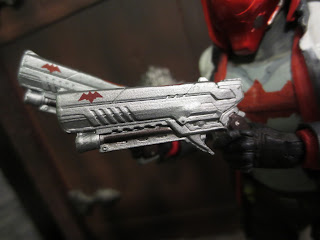 *Batman may not use guns but that doesn't mean that Red Hood won't! Seriously, these are some wicked piece. I really like the bat-emblem on them (seems like something Jason Todd would do to piss Bruce off) and the fairly elaborate paint job. These are some really nice accessories! 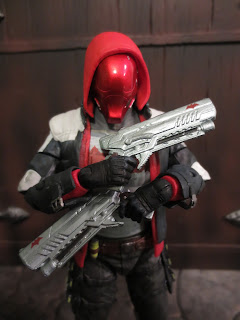 *Seriously, thanks to the double hinged elbows and the swivel/hinge wrists you can get some excellent poses out of Red Hood. This guy just looks awesome no matter what he's doing! The guns fit easily and perfectly into his hands. 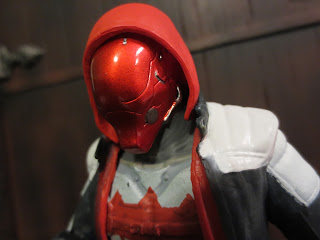 *I have one problem with this figure: The hood. Not the helmet but the hood that belongs to the hoodie that Jason's wearing underneath his leather jacket. I like the look but the problem is that while the head has awesome articulation the hood really limits it. It's made from a softer material and is glued on separately but it should have probably been a removable piece. Otherwise, it feels like it could pull off easily. It's not detrimental but it does inhibit the ability for Red Hood to look too far to the left or right. 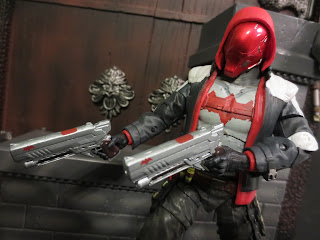 This guy is radical! He's the first Arkham Knight figure I've purchased and unless the figures just get more and more amazing I think he'll be tough to beat. He's a solid, excellent designed action figure. I really do think that the Arkham series based figures are the best Batman toyline we've received in toy form. We've gotten almost every major character who has appeared in the games so far (except for Alfred and Gordn, but Gordon is coming soon). Anyways, Red Hood is a Great and a 1/2 figure and actually edges out last year's DC Collectibles Red Hood and the Outlaws Red Hood as my favorite figure of Jason Todd to date. Since he's a GameStop exclusive check your local stores or visit their website, as that's about the only way to get him without feeding the scalpers.

I've reviewed quite a few figures from Arkham City and Arkham Origins, including: