Action Figure Review: Strobo from Masters of the Universe Classics by Mattel 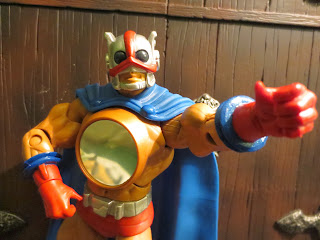 So far, Strobo has not been an easy figure for Masters of the Universe Classics fans to get their hands on. Being the traveling convention exclusive for 2013, Strobo has only been available in fairly limited numbers at a few different conventions and was available very, very briefly as in the subscription holder's early access sale early this summer (I was there right when the sale started and couldn't procure one). Fortunately Strobo is now slated to be available on Cyber Monday on Mattycollector.com so hopefully more fans will have a chance to grab what is undeniably a very cool action figure that comes with a crucial extra: the unhelmeted head for the 200x version of Zodak. It's important that Strobo's a pretty cool action figure because by no stretch of the imagination is Strobo a well know character; his only appearance was in the story "The Dark Power of Skeletor" from an issue of Masters of the Universe Magazine. Of course, sometimes these lesser known characters turn out to be the most exciting figures in the line. How does Strobo fare? Read on and find out after the break.... 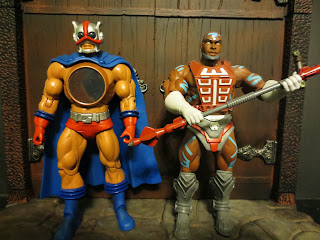 Like most other figures in the line, Strobo stands around 7 inches tall and is comprised of various shared parts from other figures. A detail of the character from his lone appearance in Masters of the Universe Magazine that has always led fans to speculate that Strobo was planned for the vintage line is that in his artwork he was drawn with details shared from other figures: Zodac's head and Sy-Klone's body. While most early vintage figures shared parts, that trend sort of faded away until later in the line when figures like Scareglow, Clamp Champ, and King Randor were developed largely as repaints with new heads. Perhaps Strobo would have been included in a later series of the line: all that he would have needed would have been a cape. This new MOTUC Strobo shares most everything with Sy-Klone but adds Zodac's head and Icarius' Crotch. 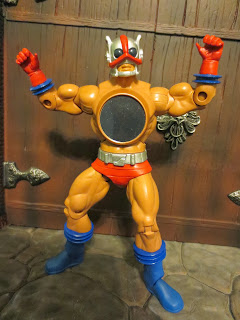 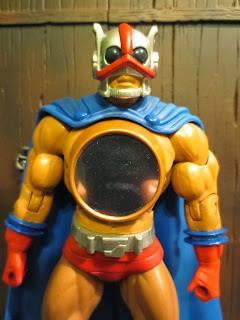 So, since all the parts are reused here is there much to talk about regarding the sculpt? Not really, but I will say that I love the way that the parts fit together. The combination of the Icarius briefs, the Sy-Klone gloves and boots, and the Zodac head really do make for a figure that looks like some sort of an intergalactic luchador. The cape is a new piece and while it's removable, I think it's pretty vital to the character's look. It fits right over Strobo's neck and stays in place. It's got some great sculpted "draping" of the fabric on the back and some decorative snaps on the front. The ribbed and rounded edges of the boots really do nicely bridge the gap between space traveler and flamboyant wrestler, which I love. In the comic he appeared in, Strobo utilized light based powers that emitted from his chest. Since Strobo shares Sy-Klone's chest piece, rather then the lenticular "radar" sticker in the center Strobo has a reflective surface. I'm not sure if this is a sticker or a thin piece of plastic but it works great to reflect Strobo's reflective powers (pun intended). 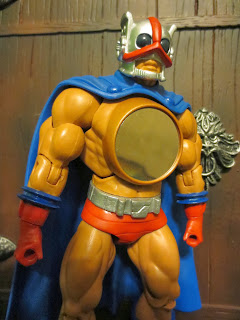 Strobo's body is mainly cast in his flesh tone which is a darker flesh tone. It looks good, adds some diversity to the MOTUC lineup, and goes well with his red, silver, and blue outfit. The helmet and belt are a nice metallic silver that really stand out. The red is vibrant on his helmet, gloves, and shorts, but there are actually three shades of blue here to liven things up even more. The cape is a standard blue while the boots are a darker blue and the cuffs on his gloves and boots are a metallic blue. It looks really nice and helps a simple repaint really feel like an all new character. Everything looks neat and clean for the most part although the separation between the gloves and cuffs is a bit messy. He's equal parts awesome and fabulous: you know that at Eternian raves, Strobo just takes center stage (too bad they didn't subtitle him "The Heroic Human Disco ball"). 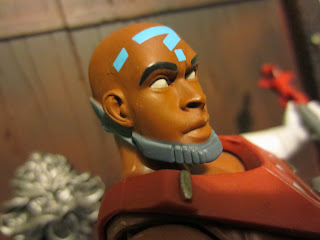 Strobo comes with two accessories (other than his removable cape): a Dark Star Energy Meteor on a stand and an alternate portrait for the 200x styled Zodak figure. First I'll talk about the Zodak head as I think it's Strobo's most appealing accessory and probably the main reason so many people want this figure. When Zodac was released in the 200x line he was renamed Zodak and was given darker skin and some very cool blue tattoos. He also featured a removable helmet and a really cool staff. Zodak was one of the best figures in the 200x line and it was a little bit disappointing that his release in MOTUC was the removable helmet or unhelmeted head. Fortunately, about 4 year later, Mattel has finally found a way to get the head to fans. It's simply an unhelmeted head that fits on your Zodak figure. He's only wearing the chinstrap for the helmet and has more of the blue tattoos on his face. Great paint work here, especially the pupil-less eyes that peer right into your soul. 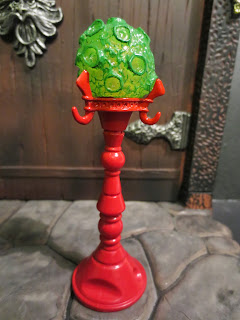 The second accessory, the Dark Star Energy Meteor, is a story specific item from the comic in which Strobo appeared. It's a piece of the Dark Star that Skeletor was trying to claim and which Strobo destroyed with his reflective powers. It's a cool translucent green meteor orb with some great sculpted detail. It's permanently mounted on a great pedestal and even if you don't know what this piece is, it'll still look amazing displayed inside your Castle Grayskull alongside other ancient Eternian artifacts like the Sword of the Ancients. Originally Strobo was going to come with a two handed laser rifle but it was scrapped due to costs. The rifle did end up arriving with the End of Wars weapons pack so you can still arm Strobo if you snag that set. 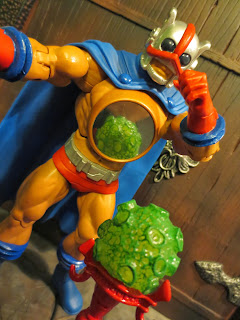 I really like Strobo. He's much better than last year's Temple of Darkness Sorceress although we'll have to see how he measures up against 2014's Goat Man.  Strobo's a fun, obscure character that adds another figure to the ranks of the Cosmic Enforcers. While he's pretty much a glorified repaint, the construction and paint design along with the cape, Dark Star Meteor, and the additional Zodak head really make him worth your time. 2013 has been an absolutely brilliant year for MOTUC and Strobo is another hit. The only really problem with this figure is the fact that Mattel has made him pretty tough to get a hold of for the average collector. Hopefully they'll have plenty for sale on Cyber Monday- otherwise, there are going to be more folks out there with Strobo's gun than with Strobo himself. I'm confirming this guy a Great figure! 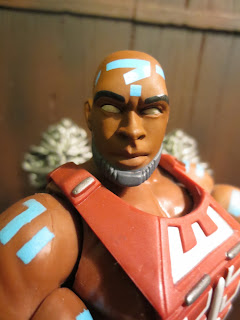