Action Figure Review: Pig-Head from Masters of the Universe Origins by Mattel 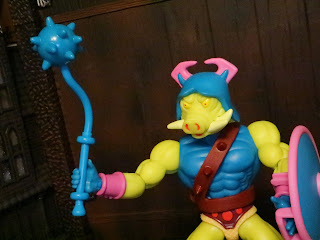 Ready for another figure from series 9 of Mattel's Masters of the Universe Origins? Then let's get ready to take a look at Pig-Head, the "Wicked Enemy of Sun-Man." Yes, Pig-Head is Sun-Man's archenemy and he's part of the cast of Sun-Man: Rulers of the Sun rather than Masters of the Universe. Well, he was, anyways, until recently when Mattel worked out a deal with Olmec Toys to bring the Sun-Man universe into the Masters of the Universe...universe. Pig-Head was originally released in 1985 and you'll have a much easier and much less expensive time trying to find this version than the original. The prices are crazy high on vintage Sun-Man toys. This is a great version of Pig-Head that really looks to capture the look and feel of the vintage toy on the modernized MOTU Origins body. Let's take a look at Pig-Head after the break... 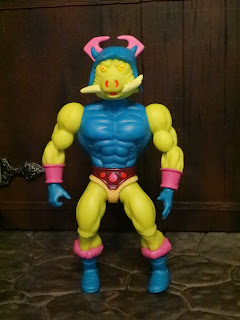 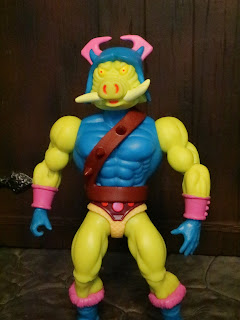 The Positives:
* Pig-Head is a very simple figure with an outfit mostly crafted from simple paint colors, though he does have some unique parts here. His spiked harness is a separate (and removable) piece and his gauntlets, boots, and waist are all new pieces designed to capture the look of the vintage toy. He's bright. Very bright, really. Pig-Head has neon green skin and his outfit is made from bright pink, bright blue, and a touch of yellow. He definitely looks like a 1980s figure from both his simplicity and his color scheme. 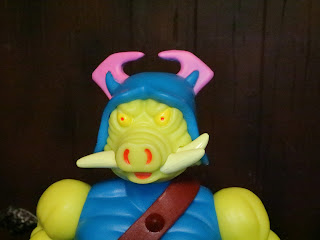 * I love the headsculpt. While it doesn't look like a vintage MOTU portrait, it definitely looks like a character who could have appeared in one of the Filmation animated shows. Pig-Head has three oversized tusks, big yellow eyes, and a battle helmet. He reminds me of something you might see in Angry Birds, perhaps as a boss creature or something. 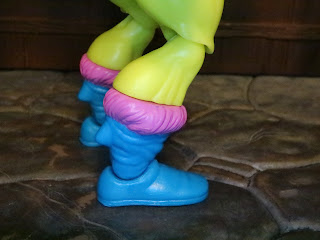 * Not only does Pig-Head have new boots but they also have a spike-like protrusion on the back. That's a neat little detail that brings a bit more pizazz to the overall sculpt. 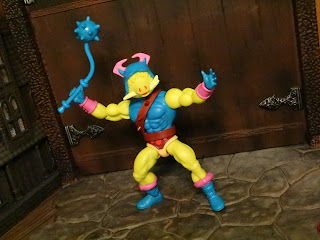 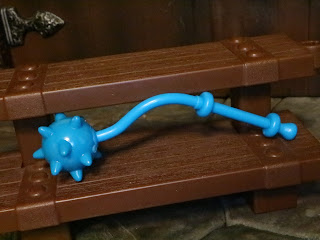 * Pig-Head comes with a spiked flail molded in bright blue. That matches the accessory included with the vintage toy nicely and does give us a unique weapon not seen in MOTU Origins previously. 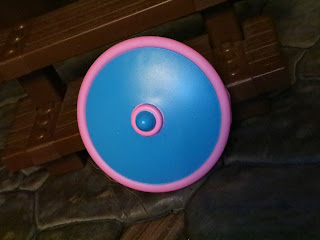 * His second accessory is a large, round shield. It's blue with pink details. It's a simple piece, sure, but it does nicely complement Pig-Head's color scheme. 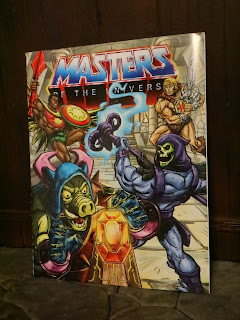 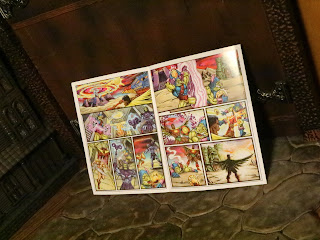 * Unfortunately, I don't know what the comic is called or what's going on because the comic has no word balloons. Apparently this is the way the minicomics are handled on the multi-lingual packaging versions, and somehow I managed to get that one. Nothing wrong with multi-lingual packaging but it sucks to get half of a comic book. I ordered this through a regular US e-tailer, too, so getting this version is really odd. 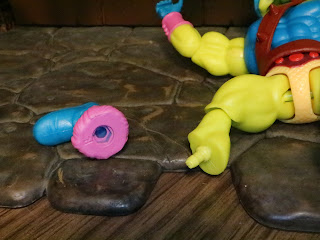 * The right leg on my Pig-Head is really loose. It tends to fall off when posing him, an issue I haven't had with any of the 70 some MOTU Origins figures I've purchased so far. Weird, right? 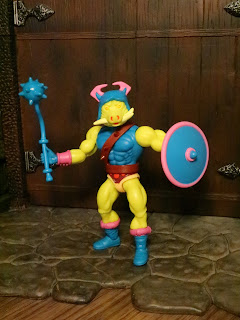 Pig-Head is a unique looking figure and it's kind of cool to have him represented in Masters of the Universe Origins even though he's never been a MOTU character prior to the last year. I like Mattel acknowledging one of the brands that was inspired by MOTU, though I will admit that some of the upcoming Sun-Man heroes certainly don't look as exciting as someone like Pig-Head. Pig-Head definitely has a lot of visual appeal and I'm guessing many collectors will be excited to work him in with the Evil Warriors or to at least have a Sun-Man and Pig-Head on their shelves. Currently Mattel has less than 20 vintage figures left in the line to still produce in Origins (I am factoring in characters we've seen preorders for and know are coming like Mekaneck, Whiplash, etc.) so perhaps the inclusion of more characters like this is just proof of how well this line is doing? Pig-Head gets a Good and a 1/2 from me. Is it possible we'll now end up with figures of Slob Boar and Pig Boy? My guess is probably not, but who knows?